The guesthouse was, in fact, a climbers’ starting point for the peaks rising abruptly from the valley floor. People well into their eighties, like my wife, Judy, and me, were not its usual guests, but our guide was set on introducing us to the country’s northern Alps.

We were greeted by a couple in early middle age, with the warmth and courtesy that animate encounters with Albanians. Friendliness, however, turned out to be the only amenity they could offer. The room to which we were shown was bare except for seven or eight unmade beds and piles of mountain gear in the corners; it wasn’t clear whether the team had left for the day or was to share the place with us. We asked for another room. The couple apologized: There was no other with an attached bathroom. No matter, we said, privacy was of the most importance. Of course, they understood, only they weren’t sure that we would like the one small room available. It will be fine, we assured them over raki on the porch. And it was; the beds were comfortable and there was even a nightstand next to each.

When we took our leave in the morning, the lady of the house accompanied us to our jeep. She seemed ill at ease, concerned, as we shook hands. Had we really been comfortable? she asked. The guide translated. My wife and I assured her that we had. It occurred to me that she also had seemed reticent at breakfast when we expressed our pleasure at having slept so well.

I was taken aback. The guide had told us that many of the villagers in the Alps were Catholic and, yes, I had noticed that the only thing on the walls of our room was a crucifix, halfway up the ceiling between the beds.

“No, certainly not. Why do you think that should have troubled us?”

Hesitant, she turned to the guide.  Some months ago, making up the room after a guest had left, she had found the crucifix shoved under a bed. Now, she was afraid that we, too, might have been offended by the figure of Jesus above our heads.

Without thinking, I said, “Oh no!  Of course not. Jesus was a Jew! He was my brother.”

She had a look of great relief. I was hugged and kissed.

Did I really say that?

Yes, I did. With no hesitation. And not to be pleasing.  Simply a statement of fact.

How could I have said that? The crucifix is the enemy personified. The mortal enemy.  The crucifix thrust by a tonsured idolater in the face of the Jew burning at the stake.  The enemy haunting the history of my people. The enemy strident in my own.

1934
Find a doorway. Fast. They’re coming round the corner into the Wienerstrasse. I hadn’t noticed. I’d been skipping over the pavement counting seams. The one all in white holding high a crucifix comes first. Then the row of their holy men in dark robes and hoods, heads hidden. Chanting. Strange scary words. The black horses with black plumes on their heads are next, pulling the black wagon. It has glass sides. You can see the coffin inside. Lines of people chanting walk after the wagon. Some of them cry.  Everyone on the sidewalk will kneel when the crucifix passes. It is coming now, slow and sure. I must not kneel. If I don’t kneel they will scream at me. Saujud. They know I am. I don’t know how they know but they can smell a Jew.

The last time I got hit. If I start running they will surely know. The kids will come after me. The Jewish stores are shut when there is a procession, like the day they call Corpus Christi when the peasants come to town. Maybe he was famous, the corpse. Someone grabs me from behind and pulls me into a yard and locks the gate and says it’s alright it’s alright and it’s Herr Breuer who sits in the second row in the Tempel Friday nights. It’s really not bad, Herr Breuer wants me to know. It isn’t bad at all. You are still a little boy. When you grow up you will see all considered it’s pretty good here in Austria.

1935
Herr Breuer was right. Here it isn’t bad at all. Not when you look east.  You don’t have to look further east than Pressburg, where my grandfather and aunts and Aranka, my cousin, live, an hour’s train ride from Vienna. Seder night I am the one who gets up from the table and unlocks the door to let in Elijah. And have a breath of air out in the yard, grandfather says. I know. Have a look around, is what he means. When he was my age they were still accusing Jews of killing Christian children for their blood. Especially around the time of baking matza for Passover. They take the body of a child found dead somewhere and hide it on the grounds of a Jewish home. A good idea to have a look.

Yes, it’s really pretty good for us in Niederösterreich. Yes. Even though when the class becomes unruly between hours Professor Bach bursts in and bellows, At-once-to-order-this-is-not-a-Jew-school, and all the faces turn and grin at me and at the other Jewish boy in the back seats. Even though the Herr Direktor of the Tierschutzverein says to my mother, “Ach, you do understand my problem, Frau Oberrabbiner…our by-laws… perhaps a club could be established for the Jewish children…animal welfare surely is a concern we all share….” Still, it’s all right. 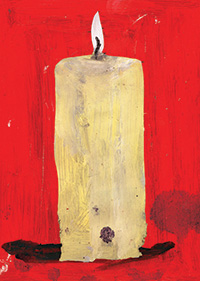 1938
It wasn’t all right. Anschluss.  The black plumed horses ride into my life. Some of us escape. A few.

1942
My grandmother is deported from Vienna to the concentration camp in Theresienstadt.

1943
My uncle Armin is kicked to death at the Pressburg train station by troopers of the Hlinka Guard, the militia founded by a Slovak priest and led by another, the quisling head of state, Msgr. Jozef Tiso.

1944
My grown-up cousin Aranka. She swims before my eyes, bright and elegant. Hungarian Arrow Cross militiamen led by Father Alfred Kun seal her and her young daughter Erika into a cattle car on the tracks to Auschwitz.

At Father Kun’s command, “In Christ’s name, fire!” My father’s cousin, whom I called uncle—nagybacsi—Elchanan Nagybacsi, is dragged to the banks of the Danube in Budapest and shot.

1946
Basic training, the Regular Army of the United States of America. The platoon is drawn from the Boston Irish slums and the Georgia National Guard; there is only one other Jew.  The catcalls come with the dark:  The Jews, the Jews. One voice opts that Hitler should’ve got ’em all.  Other voices agree. One of the Georgia boys has it that the Jews ain’t all bad, the one who runs the general store back home gave credit to the folks and sliced the bread thick even when his mom didn’t have no cash. There ain’t no one better than a good Jew, a Boston boy agrees. Assent, dissent, a lively discussion. In the morning a couple of them walk over to Phillips and me on the rifle range.Not all the Jews, they didn’t mean that, no, they don’t, you and Phillips are O.K. Phillips threatens to bash them. He won’t; he’s thin and scraggly and wears thick glasses.

I don’t threaten, I don’t have the confidence. I reason. Anti-Semitism, slippery slope, the six million, they don’t know what they were yelling about last night. Yeah, yeah, O.K., and we’ve been wanting to know why you talk so funny. That’s an accent, I grew up speaking German. Oh, wow, so that’s it, we all figured you’re a f___ing intellectual. You’re O.K., buddy, you’re O.K. Some of the guys got Maggie’s drawers. I score sharpshooter. Pats on the back.

A night later, a guy named Meany called me something I can’t remember now. I got him down and banged his head on the floor. Not serious, more of a kids’ tussle, but there were no more calls after that, and the next time the platoon got a pass, I spent the day with a boy from Georgia drinking sloe gin in a bar in Philadelphia.

1951
My wife’s parents are taking us through New England. The nicer places in New Hampshire and Vermont are filled. Judy’s father is upset; the trip was to be a break from his post with the army in Japan. Well, we’ll have to make reservations ahead.

Good. The hotel at Lake Sebago will be glad to welcome us. He signs in at the desk while we unload the car. The clerk smiles, bends over the register, and stops smiling. He coughs. “I’m afraid there has been a mistake, Colonel….  A mistake. To my regret. We are in fact booked up.  I find no reservation in the name of  Winthrop.”

“You will find it under Weintrob.  Lt. Colonel Joseph W-e-i-n-t-r-o-b.  That’s the name I gave you when I called.” The clerk flips a page, and straightens. “I am sorry, but we do not have a room.”

We walk out. There is a small wooden signboard to the side of the entrance. I had noticed similar boards at the other hotels, but paid them no attention—advertisements of some sort. Halting for a moment to shift my suitcase from hand to hand, I glance at this one. CHRISTIAN CHURCHES NEARBY, it reads.

Had he not been gassed somewhere in Poland, Herr Breuer might have pointed out that such things we learn to take in stride and that America was a very good place to be. He would have been right.

Still, some years later I made my way home, to the less safe streets of Jerusalem.

2013
A few weeks ago, on a high place in a foreign land, I called Jesus my brother. And have no regrets about it.

How could I have?

And then it hit me: Truly, I could not have otherwise.

I had looked closely at the crucifix on the wall before turning off the light. Had I not found it an intrusion? No, I had not. The contorted figure on the cross was neither alien nor hostile. It was intensely familiar.  The face of the Jews in the ghettos and the camps. The man on the cross transfigured. By suffering. Not epiphany. By overwhelming pain. And in his face a knowing, an abandoned weariness: Not the first time, not the last. He is nailed to the cross because he is a Jew. He is not the enemy. The ones who nailed him are.

He was my brother.