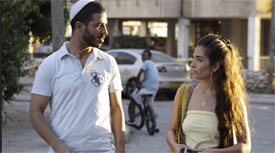 Inspired by religious fervor, Avi and his friends harass and brutalize anyone who violates Jewish law in Bat Yam. When a young woman (beautifully played by Rotem Ziesman-Cohen) decries their tactics, Avi’s conscience is activated, triggering a crisis of faith. The story is simple, but Roy Assaf’s performance as Avi is so nuanced and real that his crisis becomes our own. Go2Films.