Jews in the American Military 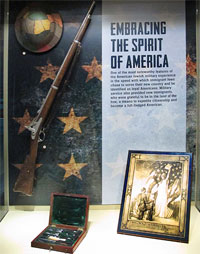 From Asser Levy, who joined New Amsterdam’s militia, to soldiers like Daniel Agami, who was killed in a roadside bomb in Iraq, American Jews have served their country. The core exhibit of the National Museum of American Jewish Military History (202-265-6280) in Washington tells their stories through text, photographs, interactive media and personal artifacts—including a World War II Torah Ark carved by a Chinese non-Jew.