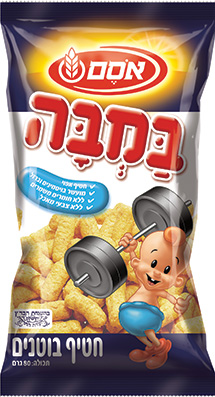 To allergy-sensitive Americans, it might seem strange that, in Israel, a Bamba Baby mascot advertises a peanut snack to infants even before they grow teeth. But a new British study and an editorial in The New England Journal of Medicine made headlines recently with their respective reports showing that Bamba, a baked corn snack with a peanut coating, helps prevent peanut allergies.

According to researchers, Israeli children suffer from peanut allergies at one-tenth the rate of their Western counterparts. The doctors behind the Learning Early About Peanut Allergy study say exposure to peanuts within the first year of life helps prevent peanut allergy by as much as 81 percent.

A bit airier than Cheetos and more oval, Bamba started out as a cheese-flavored snack in 1964 but, by 1966, was changed to peanut flavor to appeal to the local palate. Israeli parents see it as a healthy snack food and often start babies on it before the age of nine months.

The study “clearly indicates that the early introduction of peanut dramatically decreases the risk of development of peanut allergy,” wrote Drs. Rebecca S. Gruchalla of the University of Texas Southwestern Medical Center at Dallas and Hugh A. Sampson of the Icahn School of Medicine at Mount Sinai in New York, in the editorial in The New England Journal of Medicine. The study also “makes it clear that we can do something now to reverse the increasing prevalence of peanut allergy.” —Milly Ada Abraham