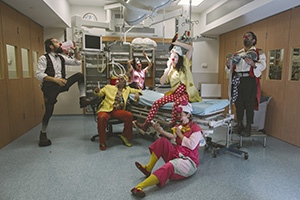 When Sasha Kapustina and Masha Tishkova set out to create a documentary about the complexity of life in Israel, they steered away from politics and headed to…the hospital.

They are directing and producing I Clown You, a documentary that follows four medical clowns in Israel. David (“Dush”) is a 15-year veteran at Hadassah Hospital who has traveled the world teaching his craft and bringing cheer to victims of disasters. Fulla struggles to reconcile her identities as a liberal Arab woman, a single mother and a clown. The duo Dori and Noam work in a bone marrow transplant unit, bringing meaning to patients undergoing painful and risky treatment in isolation, with poor chances of survival.

“Through the stories of the characters of I Clown You,” explains Kapustina, “we explore clowning as not just a way of coping or escaping for the patients, but as a way of exploring and interpreting the world, liberating creativity, questioning authority and challenging stale ideas available to all of us.”

The film is set to be released at the end of 2016. A Kickstarter campaign and private donations are funding the production.