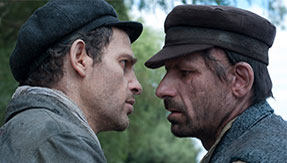 Hungary’s Golden Globe winner for Best Foreign Language Film, Son of Saul by director László Nemes and writer Clara Royer is not just the best foreign film made in decades; it represents a new model for Holocaust filmography. Its protagonist is Saul Ausländer, a member of Auschwitz’s Sonderkommandos—Jews forced to work the crematoria in extermination camps, hauling out the bodies of fellow Jews who have just been murdered in the gas chambers, cleaning up the blood and excrement left behind.

One day, Saul recognizes one of these bodies: It is his son. The discovery sets him on a mad quest to bury the boy according to Jewish ritual, but it’s not the storyline that’s significant here. What distinguishes Son of Saul from all other Holocaust films is its insistence on placing the audience in the center of the death camp experience. Through filming techniques that focus on Saul’s face while leaving the explicit horrors of the gas chambers blurry, as well as a raw soundtrack that conjures up the sonic landscape of the camps, Son of Saul compels viewers to viscerally experience, as if firsthand, the heart of the extermination machine, to live it along with Saul.  “Two Jews out of three were murdered during the Holocaust,” says Géza Röhrig, the actor who so brilliantly portrays Saul. “If that’s your subject matter, you better not treat it lightly.”

Based on the testimony of former Sonderkommando members, Son of Saul, winner of the Grand Prix at Cannes and a nominee for an Academy Award for Best Foreign Language Film, is painful to watch, to be sure, almost too painful, but it’s equally essential to grasping the nature of what transpired at Auschwitz: details of death, not heroic stories of survival. Sony Pictures Classics.