A DIY Mikve at Home 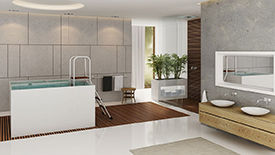 In 2001, Gideon Ebenspanger, 52, the owner of an Israeli computer company, met an indigent rabbi-kabbalist who told him of his wish to have his own mikve.

Usually built of concrete, mikves are heavy, relatively expensive and difficult to maintain. Ebenspanger started experimenting with wine barrels, glass, acrylic and other materials—none of which turned out to be suitable.

Finally he came up with a patented design using a new plastic that is lightweight, easy to install and maintain, inexpensive to heat, approved by leading halakhic authorities and now manufactured in Haifa by his company, Mikveh Malchut. Ebenspanger is seeking a serious partner to supply his mikves abroad.

The cheapest model costs less than $10,000 and comes with one partition for rainwater and a separate, larger one for dipping. Installation happens under the supervision of a rabbi. The company also makes a smaller mikve for kashering kitchenware.