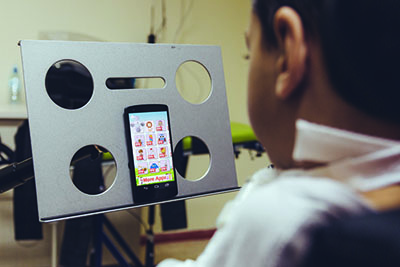 When Giora Livne, a quadriplegic veteran of the Israel Defense Forces, contacted tech entrepreneur Oded Ben Dov to see if his “gesture technology” could be used to make a smartphone, Ben Dov jumped at the chance. Ben Dov had already developed touch-free gaming technology that he had demonstrated on a television program; that is how Livne first heard the Israeli developer.

“For people in Giora’s condition, the value [of the technology] is not even debatable,” Ben Dov said. “They cannot use their hands, and so head gestures become their only means of motion interaction.”

The two of them founded Sesame Enable, which makes the Sesame Phone, a touch-free smartphone that functions by following a user’s head gestures. And thanks to a $1 million investment from Google, phones will be provided to 5,000 disabled Israelis free of charge (Hadassah Hospital has been operating as one distribution center).

And 2016 could prove to be big for the company, which recently presented its technology to the Knesset and was named a finalist in SxSW’s Interactive Innovation Awards in the Innovation in Connecting People category.

Sesame Enable also plans to bring its phone to the United States and Europe this year and develop other products in similar spheres.