New Haggadas for the Seder Table 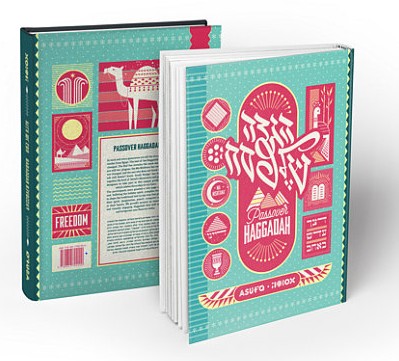 This year’s batch of new Haggadas includes four noteworthy volumes: a slim, family-friendly Haggada that you will want to bring to the table, two gorgeous facsimiles of medieval illuminated works and a made-in-the Jewish state visual treat—45 Israeli artists’ take on the Seder texts.

Several years ago, Asufa, an Israeli arts and design store and collective, started its own Passover tradition, creating a haggada—a new one each year—that brings together the talents of contemporary Israeli illustrators and graphic designers. Now available in the United States though The Jewish Museum in New York, The Asufa Passover Haggadah, bilingual edition (Asufa, 96 pp. $45)—a handsome hardcover volume perfect for the art enthusiast—provides fresh graphic interpretations of the traditional Haggada text. Each of the 45 artists is given one spread. The colorful Dayenu pages, for example, are strikingly different from the playful opening list of the Seder sections, providing ongoing fodder for Seder-night conversations and adding another question to the Passover list: Which artist is your favorite?

Among the unique aspects to this Haggada is Stavans’s intention to show the diversity of the Jewish world, and so he has included—in addition to the traditional Hebrew text—Spanish poetry by Conversos who have returned to Judaism, his own poetry about love and freedom, the protest song “We Shall Overcome” from the civil rights movement and more.

The two facsimiles are both collectors items and  fascinating historical reference works:

The Brother Haggadah: A Medieval Sephardi Masterpiece in Facsimile

Schonfield, Eliezer Laine and Ilana Tahan; Thames & Hudson, 184 pp. $120 hardcover) is infamous for its depiction of a husband pointing to his wife when reciting “This is the bitter herb.”

The Monk’s Haggadah: A Fifteenth-Century Illuminated Codex from the Monastery of Tegernsee