When Ari Seth Cohen moved to New York more than eight years ago, he was missing his grandmother Bluma, his “best friend” who had recently passed away. So in tribute to her, he started documenting the style and stories of the city’s most inspiring older people. And a phenomenon was born.

To wit: first the blog, then the book, then the documentary Advanced Style, showing photos of the flashy, the classy, the colorful and the eclectic “elderhood” around the world.

And now he’s come out with a second book, Advanced Style: Older & Wiser

, which not only depicts men and women in all their splendor, but their hearts and souls, too, with accompanying essays.

“In my head, I’m still in my 20’s, and I have no intention of ever growing up,” Tao Porchon-Lynch, 97, writes. Depicted in a swath of blues and greens and pink heels (always heels), she exhorts living her life without fear. She marched with Gandhi in 1930. She performed nightly through the World War II London bombing blitz. She worked with the French Resistance helping Jews escape the Nazis and later modeled for top designers like Coco Chanel. She took up ballroom dancing at 87 and lives every day with style. “When I get up in the morning I say to myself, ‘This is going to be the best day of my life,’ and then it is.”

Valerie Von Sobel, 74, has “a perpetual love for the ceremony of dressing.” In her stark white dress and starry headdress (on the cover of the book), she says, “If you don’t make your life a bit grandiose, who will do it for you?” 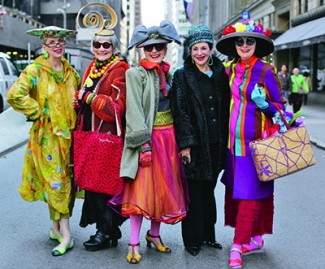 Or as Simon Doonan says in the foreword, “Never do when you can overdo.” He says that dressing down is a “crime against humanity,” but dressing up is a “veritable mitzvah, a gift” to those around you.

It’s not just about clothes and style, though. Advanced Style is an attitude.

“The true key to aging with advanced style is maintaining an attitude of optimism, a healthy and active lifestyle and a sense of continued purpose,” Cohen says.

“I hope that if we begin to see aging differently, that we will start treating older people with the respect and reverence they deserve. By refusing to accept the notion that growing older is something to be feared, we can begin to fully embrace our ‘elderhood’ with as much joy, creative growth and imagination as our childhood.”