The postman for Yoel Moshe Solomon Street still lived with his mother in Jerusalem. We all knew it because once, about 15 years ago, the postman had gone on a blind date with a young American woman who was visiting Jerusalem. She had been deeply disturbed by this fact. “But you’re over 40!” she kept saying. Ever since, the postman had spent his time alternately justifying himself or trying to hide that embarrassing fact, so that even people who had originally thought it was very sweet that he lived with, and cared for, his elderly mother, now found it odd and a cause for concern.

He stopped in almost every store along his route and would make a point of mentioning something his mother had said, done or might like to buy. This would be quickly followed by a statement like the following: “We Israelis understand that there’s nothing wrong with living with your mom. Of course getting married is the ideal, but not everyone can. There’s a real shortage of good women out there, and on top of that I guess I’m just a bit picky. I won’t take just any woman, not me! No, in fact, I think it’s quite good that I live with Mom, so that I can date without pressure. Plus, this way I am saving money for the kids. They’re expensive, kids, and I wouldn’t want to be unprepared. In fact, Mom always says…” As you can imagine, his route took a bit longer than average since this speech—delivered with great feeling, customers and other pressing business matters notwithstanding—required an investment of time that the average postal worker was not willing to make.

One day, a very strange thing happened: Our postman, who had walked the same route for the past 35 years, found himself walking a different route. And as the week wore on, he kept to his new route. He began to come earlier in the morning, too. His speeches got shorter and shorter, until, by the end of the week, they had all but disappeared. We began to worry. Wasn’t he feeling well? Should we have been kinder to him? Perhaps the jokes at his expense had gotten back to him somehow and he was going to request a different route or, worse still, retire.

In the end, the postman solved the riddle for us. “Did you know that someone opened a bookstore two streets over?” he asked me. When I shook my head, he continued in a somewhat dreamy voice, “It’s right near the walls of the Old City. She doesn’t speak any Hebrew, but everyone likes her so much. I help her a lot and she is very grateful. She says so every day.” Leaning over the desk so that no one else should hear, he continued conspiratorially: “I’m pretty picky about women, but she’s, she’s—what a woman! Even I might think about asking her out. Of course, I’d have to think about it, you know. I am pretty picky. After all these years of waiting, I wouldn’t have just any woman.” Before I could so much as agree with him, our postman had practically jogged out of the store.

Each day he told us a few more tidbits about Margaret, for that was the mysterious bookstore owner’s name. Margaret had retired and moved from the United States to live in the Holy City, settling as close to the Old City as her modest pension would allow. She opened a bookstore more to keep occupied than anything else and was delighted to discover that Jerusalemites never throw out a book. Instead, they put it on the curb near the trash just in case someone else wants it. 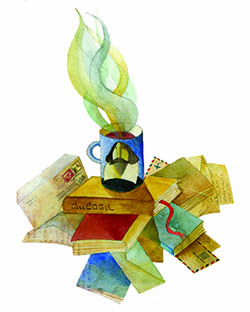 “Today,” said our postman proudly, “I brought her the 1972 penal code, all six volumes; a rare edition of the mining practices in South Africa; and a book in Dutch with the cover missing.”

of the South African mining practices. “Well, there can’t be too many of them floating around Jerusalem,” said the postman. “If someone wanted to know about this particular topic, he’d be right out of luck. I should say Margaret is very lucky to have me for a postman.”

This statement was undeniably true. Margaret was, in fact, very lucky in her postman. Every day, he would finish his route at a near run, leaving Margaret for last. He brought her the books he saw as he walked around town, and as the day wore on, his bag, instead of getting lighter and lighter, grew heavier and heavier. When he finally dropped the bag at her feet around noon, she would make a motherly fuss over him and order him to sit while she made him tea. Then he would gallantly translate her electricity bill into English, explain how to find the bank, how to bargain using a few simple hand gestures and which buses to take to get to Tel Aviv.

Margaret, for her part, was confirmed in what she had always suspected about Jerusalemites—that they were warm and generous and, being a nation of immigrants themselves, were eager to help newcomers. She never guessed that in the postman’s heart raged a storm of romantic admiration. He was courting her, but so shyly that she never noticed.

Margaret may have been unaware of the postman’s interest, but his mother was not. In fact, she was distinctly aware of the change in her son and it made her nervous. She would have been happy for her son to marry, of course—what mother wouldn’t? She often lamented his inability to find favor in the eyes of the opposite sex to her neighbor, an old woman who lived all alone and had no one to cook for, no one to bring the groceries upstairs and no one to talk to late at night when she couldn’t fall asleep. Six children this woman had, and they had all married and left the house. Surely there was some sort of warning in that?

Luckily for the postman’s mother, her son was inexpressibly picky. He would come home after a date and give her the play-by-play. “She was nice and she works in a dentist’s office,” he would say. “A dentist’s office?” she would ask with just the slightest hint of discomfiture. “But you are so smart, so skilled. After all, you went to the university. Oh, I know it was only two months, but the point is, they accepted you, and I really don’t know if she would be smart enough for you. Was she ever accepted to university? Did you ask? What color was her hair? Brown? Well, of course I know you don’t mind brown, but I do think you deserve a blonde, don’t you? Her voice, what was it like? Oh, that’s good. But did you pay attention to her nails? These things are important. You think they may have been painted? Heavens! You know what I always say about women who paint their nails.” By the end of the evening, the postman, his self-esteem newly bolstered by his doting mother, would realize that he was quite a catch. Any number of women would want to marry him, given the chance. But he had to be careful to select just the right one. After all, marriage was a serious business and couldn’t be undertaken with just anyone who had a pleasant voice and a paying job.

When it became clear that the postman was smitten, his mother went to pay a call on Margaret, to decide if she was good enough for her son.

I mother you davar,” she announced slowly and loudly upon entering the crowded little shop. Margaret knew that a davar was a postman because the postman had told her so. She quickly worked out who her visitor was and began to praise the postman warmly. The postman’s mother didn’t understand everything, of course, but she did get the gist of the conversation. When she left the store three hours later with four cups of tea and not a few cookies under her belt, she was considerably softened and had even begun to entertain a small fantasy of the three of them living together. What a dutiful daughter-in-law Margaret would be, and probably more patient with her late-night aches and pains than her son was—and she might even know how to give foot massages! She had probably never had real Israeli home cooking before, but the postman’s mother was sure she would know how to appreciate it.

That night, when her son came home, she told him that she had been to see Margaret.

And she’s lovely,” his mother said in the tone of one who fears she will regret this admission later. “Really lovely”

“I know!” he enthused. “She’s great. I only wish I could marry her,” he said, looking downcast.

“But why not?” asked his mother, who had gotten used to the idea in the intervening hours.

“Well, you see, she’s a bit older than me,” he explained. “A whole year, in fact, and I was still hoping to have children. I’m a very desirable man, you know, and I am not sure I am quite ready to settle on just anyone, especially someone older than me. The thing is, I am rather sure she would be hurt if I told her that. A woman all alone in a country—she must be looking for a husband. So we won’t tell her, and I will keep visiting her as usual so as not to dash her hopes. And perhaps you can visit her, too, in the mornings when I am working, and that way she will never be lonely and won’t have time to feel disappointed.”

The postman’s mother reflected on her son’s wisdom and saw that he was right. She did, after all, want grandchildren.

Margaret never knew how close she had come to a proposal from her postman, but continued to regard him as the noblest and most generous of men. And if you happen into the little bookstore near the Old City walls when the postman has finished his rounds, you will likely find the two of them—and sometimes even the three of them—sharing a cup of tea together and sorting through Margaret’s new books.