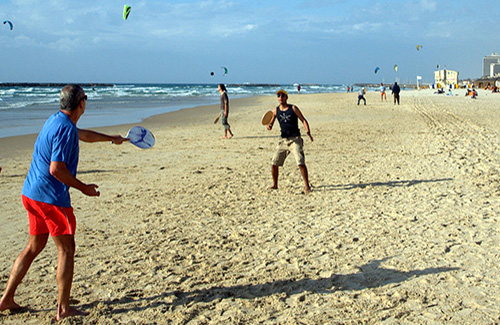 It was supposed to have been a lazy weekend of eating well and waking up late to the sight and sound of the sea washing up alongside our Tel Aviv hotel. a Instead, at 7 A.M. on a Saturday morning several years ago, I was awoken by a thud, followed by another and then another. The rhythmic thwacking went on and on and sounded as if it was coming from right under our window. Which, apparently, it was.

It turned out that this Tel Aviv hotel, specifically one of its walls, had been taken over by players of what is sometimes called Israel’s national sport: matkot.

And Saturday morning is their favorite time to whack a ball with a paddle again and again.

It is a ritual that is practiced along much of Israel’s coastline, but nowhere more than on the beaches of Tel Aviv.

Now, several years later, i find myself face-to-face with the two men whose initiative, or chutzpa (depending on your perspective), ruined my morning—and, I imagine, that of other hotel guests.

Morris Zadok and Amnon Nissim are proud of their role in turning the side of a hotel into a makeshift court for matkot players, even if it meant flouting the law along the way. As they rave about the game they have devoted their lives to, one can almost get swept up in their enthusiasm.

Matkot, Hebrew for rackets, is a bizarre sport: It has practically no rules, no winners and can go on forever, making it in many respects a metaphor for the Middle East conflict.

Zadok sees the game’s idiosyncrasies in a different light. “There is no competition. It is all about cooperation, harmony, love,” he enthuses.

In matkot—known as kadima in the United States—two players, usually barefoot and scantily clad, use a paddle to hit a Ping-Pong-sized rubber ball back and forth on the beach as many times as they can. Sometimes one of them plays offense, slamming the ball, while the other assumes defense and tries to absorb the wallop. Players generally stand parallel to the sea and stop only to chase missed balls.

That, at least, is how most Israelis have played matkot for decades. But an elite group of players, led by Zadok and Nissim, wanted a location where they could practice smashing the ball harder and found it at a hotel on the Tel Aviv promenade. Instead of passing the ball to each other, they whack it off the hotel wall.

Zadok, 66, and Nissim, 72, are Israel’s undisputed matkot kings. They have earned that title through seniority (each has been playing the game for over 60 years); mastery (both have a slew of trophies and can hold their own with players half their age); and, above all, an obsession with the game.

Matkot is my life,” says Nissim, who has no wife, children or siblings and regards his fellow players as family. An army pensioner, he began playing matkot at the age of 6.

His cluttered apartment in the Tel Aviv neighborhood of Neve Tzedek doubles as the world’s only matkot museum. The hundreds of paddles on display include an eight-foot-long wooden one made especially for Nissim as well as paddles made of marble, glass and even wool. The apartment’s mezuza is in the form of a paddle. Trophies line the shelves, and photos of Nissim with various local V.I.P.s are displayed.

Zadok, who helped establish the quirky museum, owns a sporting-goods shop in nearby Bat Yam that sells matkot equipment.

The two are best friends and wear identical gold pendants in the form of—you guessed it—a matkot paddle, inlaid with a diamond.

Friendly and outgoing, with the zeal of a missionary, Zadok never stops trying to convert nonplayers into players. He teaches the game at Wingate Institute—the place in Israel for professional sports training. He has even gotten an unlikely demographic—ultra–Orthodox men—playing the game. A few dozen from Bnei Brak, Mea Shearim and other haredi communities congregate once a week in a sports arena in Bat Yam, where Zadok teaches them the game. “It is probably the only place in Israel where matkot players wear black pants, white shirts and a hat,” he notes. Zadok even attempted to get the game approved for the Olympics, hastily putting together a list of rules for it in his failed bid.

Although it is favored by men, women also play the game—and Zadok’s latest unabashedly sexist sales approach is to convince them to buy a paddle to “match their bathing suit.”

Zadok and Nissim are convinced that matkot is the quintessential Israeli sport. The game has been played since well before the establishment of the state. A 1932 painting by artist Nahum Gutman depicts a pair of matkot players on a Tel Aviv beach. Other records suggest it was already being played in the 1920s.

Its informality is suited to Israeli life. “With other ball games like squash or tennis, you have to reserve a court in advance,” notes veteran player Diana Zadok, Morris’s wife. “With matkot, you hop over to the beach anytime and play. It’s accessible, it’s spontaneous, it’s free. And it’s more than a game,” she adds. “It’s a way to spend a day with friends, with the hevre, at the beach.” She should know—she met her husband of 34 years after retrieving a stray matkot ball for him.

Then there’s the acoustics. The clack of a rubber ball making impact with a paddle is ubiquitous on the seashore. “For me, the beach in Israel means the sound of waves and matkot,” enthuses Modi’in resident Rene Gold. “It’s part of the special vibe here.”

A similar game called frescobol is played in a handful of countries, including Brazil, with one significant difference—the noise. “The racket we use in Israel is unique because it is hollow,” explains Morris Zadok. “It makes much more noise than the ones used in similar games elsewhere. In Israel, we like to make noise.”

Matkot equipment has, like Israel itself, transformed from simple to high tech. For over 50 years, the paddles were wood, and they broke easily. Nowadays they are made of carbon, which is both more durable and much lighter than wood. Two years ago, an Israeli manufacturer came up with an even more revolutionary concept: helium-filled paddles that are super light.

“You can still buy a $20 wooden paddle, but you can also get one that costs $270,” says Zadok, noting that the carbon models have yet another advantage: “They’re noisier,” he says, and then grins.

Perhaps the most distinctive feature of the game is that unlike squash or beach tennis, matkot’s closest cousin,  (popular in Italy), matkot is played in an area that is not delineated. There is no court or field, no clearly defined borders—not unlike Israel itself.

Players show up and stake out territory among the sunbathers, a practice that calls for negotiation and occasionally leads to friction. A recent Israeli cult short film berates the game and its players for aggressively taking over beaches, injuring innocent passersby and ruining the day for those seeking relaxation at the seashore—accusations Zadok dismisses as “over the top.”

Some boundaries have developed over the years. Matkot players are prohibited by law from playing within 230 feet of a manned lifeguard station. Municipal inspectors roam the beach to enforce the rule. But beyond that it is a free-for-all.

Then there is the story of the “conquest” of the hotel wall.

“We needed a wall to play more intensely,” says Nissim, speaking of about 100 devoted players. “City inspectors would come and ask us to stop. They would call the police, who would also ask us to stop. But we continued playing.”

They were never fined.

“We just invaded the place and took it over,” says Diana Zadok. “You know, just like the settlements,” she adds with a laugh.

The matkot players’ turf was eventually approved retroactively by the authorities—in this case, the city of Tel Aviv. About seven years after they took over the site de facto, the area was officially declared a matkot court—after a campaign that included letters to city hall and a meeting with the mayor.

A sobering lesson about how things work—or don’t work—when it comes to law enforcement in Israel? Or evidence of how far Israeli determination can get you—an “if you will it” parable?

Maybe the answer depends on whether or not you are an unsuspecting hotel guest.

Neither police, bad weather nor missile attacks deter Tel Aviv’s die-hard players. During the 2014 conflict between Israel and Gaza, rockets were fired at Tel Aviv throughout the summer. “We would stop for a minute during a siren,” says Nissim, “take shelter at the café next door, then resume our game as soon as the alert was over.”

Not even death can come between the most avid player and his or her paddle, as Diana Zadok can testify.

One day, she was working in the sports shop when a woman burst in and asked for matkot equipment. “I asked her what kind, what color, price range,” Zadok recalls. “She got very impatient and said, ‘It doesn’t matter. I’m on my way to bury someone and I need any two paddles and a ball right now.’”

Before he died, the woman’s father, a veteran matkot player, had asked to be buried with paddles and a ball.