Several months ago, we put out a call for stories and photos of your favorite Hadassah pins—examples of your most treasured collectibles—and what you have sent us is astounding. Here’s a sample of what we received. But this doesn’t have to be the end of the story. For anyone else who wants to show us items from their Hadassah jewelry collection, please share them with us on Facebook and Twitter. Thanks!

Although asked many times, my late mom, Shirley Caplan, never took the presidency of her chapter, Kew Garden Hills in Queens, N.Y. She felt as president you needed to lead by example, so if you were asking for donations you had to be the first to donate. Unfortunately, my parents never had money to spare. So Mom joined Hadassah annually because she could not afford more, and she donated her time, energy and passion. In 1986, her chapter honored her 50 years of service. After receiving a certificate at a monthly meeting, my siblings and I presented her with a life membership and this pin. She was incredibly happy and nearly burst with pride. The occasion inspired me to become a life member, too. —Ruth Olivenbaum, Commack, N.Y. 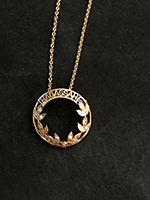 Many years ago we had a burglary in which all of my jewelry was stolen, including my Hadassah collection. Before I bought new, my sister told me to come “shop” in her drawer. It seems a friend of my sister’s mother-in-law died and the family gave my sister her Hadassah pins. The gold circle with Hadassah written out and what appear to be diamond chips in some of the leaves can be worn as either a pin or a necklace. Every time I wear it I get compliments and questions. So far, no one has been able to tell me anything about it. I believe that the original owner was from Queens, N.Y. —Shirley Michalove, Atlanta, Ga.

I joined hadassah 25 years ago, when my daughter was 3 months old. Susan Golding from the North Shore chapter [Chicago North Shore now] called me up and asked me to a meeting. I had never heard of Hadassah but said if it got me out of the house I was there. I’ve made lasting friendships and have held many positions. This pin wasn’t my very first but it was one of the earliest ones and remains my favorite. —Pam Herstein, Buffalo Grove, Ill. 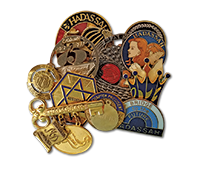 My friend Brenda Seiden, of blessed memory, used to make collages of Hadassah pins, one of which she gave me. This was a clever way for her to wear many of her pins at the same time. When she would wear the collage pin at national conventions, women would stop her to admire it. She began to take orders from Hadassah members from around the country to make customized collages. She would charge a small fee and donate the proceeds to Hadassah. Brenda was an active member of the Noar of Newburgh chapter in Newburgh, N.Y., and Lower New York State Region board. —Amy Solomon, New Windsor, N.Y. 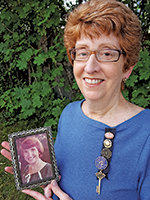 One of my most precious pieces of my mother’s jewelry is a Hadassah pin that I wear proudly on my ribbon of Hadassah pins. On it is the word Scopus, I believe in honor of a fundraising donation for the Hadassah hospital on Mount Scopus. —Debbie Ring, Massapequa Park, N.Y.

I grew up in White Plains, N.Y., and was a member of Junior Hadassah there, and received this pin (right). I graduated high school in 1963. Little did I know then what my Hadassah future would hold—today I am president of Hadassah Rhode Island! —Sue Mayes, Middletown, R.I. 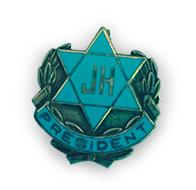 Many years ago at a hadassah convention I met a woman who was making a pin collage as a fundraiser for her chapter. She asked that I send her 10 pins and draw a picture of how I wanted them to be placed. It has been a wonderful pin (right) and much admired. My favorite pieces in the collage are the fruit basket and the nurses pin on the lower right. —Joan Hulkower, Port Washington, N.Y.

When my late husband, Martin, became an Associate in the 1970s, he was given this pin. I wore it the other day and received lots of comments on it. —Renee Albert, New York, NY

From Generation to Generation, Celebrating Hadassah at 100