Being Jewish at Christmas 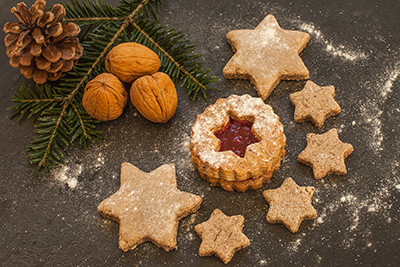 We often read and hear about the tug of war that happens between Hanukkah and Christmas in American households with spouses and extended family of more than one faith. Although the two holidays really have nothing to do with each other, the in-home, in-heart emotional conflict between them can seem daunting. That may be especially true this year because they directly converge, with Hanukkah beginning on Christmas Eve.

We know that intermarriage rates are rising: 72 percent of non-Orthodox Jews who have married since 2000 said “I do” to a non-Jewish spouse, according to the Pew Research Center’s 2013 study on American Jewry. The “December Dilemma”—and the accompanying joy and complicated feelings that go along with it—is very real for some of these families.

However, for many of us who are intermarried and raising Jewish families, this “dilemma” isn’t such a dilemma after all. We’ll put up our Christmas tree and get out the menorah. We’ll decorate the house with blue lights and shred mounds of potatoes for latkes. We’ll buy eight gifts for each child, one for each night of the Festival of Lights, plus more from “Santa” for under the tree. We’ll play the dreidel game with Bubbe and bake Christmas cookies with Nana.

And because we do these things, many outside our own families will point accusatory fingers at us and say we are “doing both” (some indeed do both) and that doing so is confusing for the kids (let them ask questions and have those conversations). And that we are wrong (who decides what is wrong?). And my favorite: We’re not really raising our kids Jewish (we are). Celebrating these joyous occasions is not confusing for my Jewish children. They know they are Jewish.

But just as our Jewish traditions are important to us, they also know that the traditions of my husband, Dave, and his family are an important part of our familial fabric that we don’t want to lose. In my house, celebrating Christmas is not celebrating another religion, it is celebrating family and traditions that have been passed down for generations.

Early on in our relationship, Dave and I agreed that we would raise our children Jewish. He wanted to keep Christmas because he wanted to share with his children those celebrations that were so meaningful to him. So we agreed. Now, for our family, having both Christmas and Hanukkah holidays in our home—and with his family in their home—is a normal expression of both traditions. Our 10-year-old son, Alex, understands that our faith is Jewish and that our celebration of Christmas is a family tradition, as opposed to a faith celebration. As our 5-year-old Eli gets older, we’ll have that same conversation with him. Alex likes to brag that he gets to have two special celebrations in December, and both are full of love and light and family and tons of delicious food.

I would urge all interfaith families to have conversations about Christmas trees and dreidels, and if you are brave enough, talk in-depth about the two holidays and their meanings in their respective religious realms. There are tools available to help guide the conversations (interfaithfamily.com offers many). Once you come to conclusions that are right for your family, the dilemma won’t seem so daunting.

Liz Polay-Wettengel is the national director of marketing and communications for InterfaithFamily, an organization that supports interfaith families exploring Jewish life.