Digging for Jewish History Near the Temple Mount

Jerusalem archaeologist Eilat Mazar unearthed a striking discovery several years ago: a glittering collection of Jewish treasures dating to the early seventh century CE, likely abandoned during the Persian conquest of Jerusalem. Among the finds of the Ophel treasure—named after the area along the southern edge of the base of the Temple Mount where it was discovered—were three dozen gold coins and, the pièce de résistance, a large golden medallion emblazoned with a menorah, a shofar and what might be either a Torah scroll or lulav.

Mazar, of the Hebrew University of Jerusalem, and her team announced the find—at that point only the third collection of gold coins ever discovered in Jerusalem—in 2013, timing it to coincide with Rosh Hashanah. The news made headlines around the globe. However, two days later, Mazar received a letter from Shuka Dorfman, then-director of the Israel Antiquities Authority (IAA), the organization responsible for almost all excavations and antiquities in the country. The letter served as a cease-and-desist order, shutting down the dig by citing “lack of cooperation with the antiquities authority,” without further elaboration.

Since then, there has been no work at the Ophel, and a third of Mazar’s project to excavate down to the level of the First, or Solomon’s, Temple and its concurrent 10th- to 6th-century BCE period is left unfinished.

Just as politics and religion complicate access to the Temple Mount and its surroundings aboveground, so, too, do they affect the search for antiquities hidden beneath its surface. Captured in the Six-Day War, East Jerusalem, including the Old City and the Temple Mount, is considered occupied territory by many international bodies, making digging there controversial despite the rich Israelite history associated with the area.

The Temple Mount itself is a hilltop plaza enclosed by four ancient walls whose oldest sections were built in the first century BCE. Sacred to Jews, Muslims and Christians, the mount is the former site of the two Jewish temples. Muslims call the place Haram al-Sharif (the Noble Sanctuary) and consider the site, where the Al-Aqsa Mosque and Dome of the Rock and other early Islamic structures stand, the third holiest after Mecca and Medina. The Jerusalem Islamic Waqf (religious trust), under Jordanian administration, controls the mount. The Israeli government does not allow Jewish worship there.

The Kotel, also known as the Western Wall because it flanks the western side of the mount, is the closest in generations that Jews have been able to get to the area where the temples once stood. The Ophel, which means fortified hill, lies below the hilltop plaza on the south, abutting the City of David, once the heart of ancient Jewish Jerusalem.

For Mazar, 60, scion of a family of esteemed Israeli archaeologists, the potential for discovery is still enticing, despite the complications of digging in Jerusalem. “The archaeology of Jerusalem is immense,” she said when we sat down to talk in a café at Hebrew University. “One of the most important things that I think we’ve seen in our excavations is that the preservation of the early periods is exceptional, beyond all our expectations.”

Because of the political and religious wrangling—recall the international brouhaha following the October 2016 resolution by a United Nations body ignoring Judaism’s ancient link to the Temple Mount—archaeologists’ trowels have barely scraped the Temple Mount itself. Jews and Palestinians alike have protested excavations for fear that digging may weaken its foundations.

The area surrounding the Temple Mount, however, has been the focus of decades of excavations, with sites to the west and south now open to public view, creating links for both tourists and Israelis between ancient Israel and the modern state. 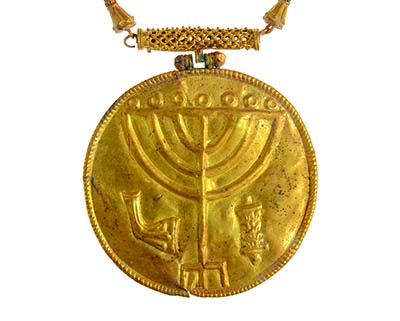 “We must protect the site, display it and give it the respect it deserves,” she added.

Mazar’s passion for the physical history of Jerusalem was learned at the side of her grandfather, Benjamin Mazar, a pioneering Israeli archaeologist (and president of Hebrew University between 1953 and 1961), who blended historical geography with biblical interpretation. A year after the Six-Day War—and after then-Defense Minister Moshe Dayan confirmed that the Temple Mount, despite being captured by Israel during the war, would remain under Waqf management—the elder Mazar headed the first Israeli excavations breaking ground around the Temple Mount, along the western and southern walls.

Eilat Mazar started volunteering on her grandfather’s digs right away, working with him for decades. The appeal of archaeology, she said, isn’t about discovery. It is about the slow process of piecing together bits and pieces of data to form a larger picture of the past. “The most important thing when digging is to document everything with precision,” she explained. Those finds, oftentimes mundane, unlock a deeper understanding of the past.

“When we excavated in the Ophel in 1986 and 1987,” she recalled, “we discovered monumental buildings, fantastic preservation, the
most important of finds, including Hebrew inscriptions—royal inscriptions in Hebrew from the seventh century BCE!”

Like her grandfather, Mazar is a biblical maximalist, meaning she accepts the historicity of biblical text connecting the Jews to the Land of Israel and interprets archaeological finds through that lens. “The biblical narrative, I submit, better explains the archaeology we have uncovered than any other hypothesis that has been put forward,” she noted in a 2006 article in Biblical Archaeology Review.

Other archaeologists hotly contest her interpretations. Biblical minimalists question the Bible’s account and believe the kingdoms of Judah and Israel bore little resemblance to the vast monarchy portrayed in the text. “Even many maximalists are uncomfortable with Mazar’s historical interpretations,” said Michael Press, a Jewish studies scholar at Indiana University, who has taken part in excavations in Israel. He is among those critics who, he said, “generally believe that Mazar rushes to judgment and publicizes finds before they have been fully analyzed.”

Responding to her detractors, Mazar quipped, “If you thought there’s such a thing as David and Solomon—wrong. Their axiom is ‘an absence of evidence is a proof that it didn’t happen.’ ”

She notes the monumental building whose ruins she uncovered 30 years ago in the Ophel, which she believes was a massive gateway leading into the upper precinct of the city. “A gate of Jerusalem from the First Temple period,” she said, the thrill of discovery still resonating decades later. She also makes the assertion, which other archaeologists have contested, that the 10th-century BCE fortifications that she and her grandfather found in the Ophel near the gateway were the walls King Solomon built around Jerusalem, described in Kings I (9:15): “Here is the account of the forced labor King Solomon conscripted to build the Lord’s temple, his own palace, the terraces, the wall of Jerusalem….”

Later digs by Mazar in 2009 and 2013 yielded ruins of several other buildings she dates to the 10th century BCE as well as a royal seal bearing the name of King Hezekiah, another biblical monarch, and an inscription believed to be the oldest alphabetic text found in Jerusalem.

Although other layers of Jerusalem’s history are clearly visible in the seven acres of excavations around the Kotel—from the Roman period beginning in 70 CE until modern times—there are almost none from the First Temple era, she said. The Ophel is the only place with finds from the time of David and Solomon.

The First Temple period is her holy grail, and she chafes at the IAA’s restrictions, describing it as “ruling with an iron fist.” Part of the problem, Mazar said, is that the IAA creates its own regulations concerning who can dig as well as issues licenses for archaeologists to operate. She asserted that since her most recent Ophel excavation was a joint undertaking with the IAA, the group took umbrage that she announced the discovery without them.

Archaeologist Shimon Gibson, one of the few researchers operating active archaeological excavations in Jerusalem outside the IAA, said he also has had his share of “difficulties” managing the authority’s byzantine bureaucracy. Gibson, a senior fellow at the Albright Institute of Archaeological Research in Jerusalem and adjunct professor at the University of North Carolina, heads the university’s dig on Mount Zion. So far, among their discoveries are homes of the priestly elites from the Second Temple period.

“From my point of view, I see the IAA as monopolistic,” he said, “but I understand where they’re coming from because it is a complicated city to work in.”

The IAA refused to comment on the contents of Dorfman’s 2013 letter to Mazar, or the reasons behind ending its cooperation with Mazar. After repeated inquiry, a spokeswoman insisted that “the IAA has met with Mazar with the aim of completing the excavations, as previously agreed upon by the two parties.” Further excavations must also be given a green light by the Nature and Parks Authority, as the Ophel area is part of the government-run Jerusalem Archaeological Park-Davidson Center (archpark.org.il), opened to tourists in 2011.

When renewed excavations might commence remains unclear. The IAA has recently opened a walkway, called the Mikveh Trail, through the Ophel for the public to learn more about the history of the site, including Mazar and her grandfather’s work. And those who wish to see the golden treasure can find it tucked away in the archaeology wing of the Israel Museum.

Ilan Ben Zion is a reporter based in Jerusalem who writes about antiquities, food and travel.

For related stories, read the following:

How Israeli and Diaspora Jews See the Kotel Differently

A Place For Prayer at the Kotel

Six Transformative Days: A Primer on the Last 50 Years

The War that Changed Everything—for Israel, for Me