More on Advance Directives and Equality 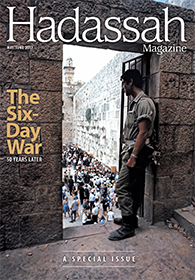 LET’S TALK ABOUT LIVING
The article “Let’s Talk About Dying” (May/June issue) mentions arranging for an advance directive or Do Not Resuscitate directive. But when my mother was rushed into intensive care with renal, heart and lung failure, I did not agree with the ER doctor who wanted to “pull the plug.” I knew my mother’s capacity for healing. He did not.

​​Today, she no longer needs the respirator, tracheotomy and feeding tube, and on this, her 91st birthday, she is pain free, living with my father, telling jokes and enjoying life, cake and dim sum. An advance directive or Do Not Resuscitate directive can be helpful, but it should be kept by someone who knows the patient well, not in a doctor’s office or hospital file.

I AM NOT ‘NON-ORTHODOX’
In writing about pluralism issues in Israel, it is not unusual to see the term “non-Orthodox” used to describe Jews who observe tradition other than Orthodox. Most recently, I noticed it in the May/June issue, in the article “How Israelis and Diaspora Jews See the Kotel Differently.” Yours is not the only publication to use this term, but I wish it would stop.

​It is not meaningful and even insulting to describe people in terms of what they are not. I am no more “non-Orthodox” than the chief rabbi of Israel is “non-Reform.” The term “non-Orthodox” may be convenient, but it is demeaning to Reform, Conservative and Reconstructionist Jews.

​Other umbrella terms are available. Liberal or Progressive would probably work. But please, do not call us what we are not.

EQUALITY IN THE BOOK WORLD
I was thrilled to see the article “Art for Art’s Sake in Israeli Literature” in the May/June issue, but was disappointed when I realized that all four authors reviewed were men. Women authors in the United States are underrepresented in book reviews, and men are more likely to be the book reviewers. I couldn’t help but notice that the author of this article is male. Hadassah Magazine is a great supporter of equality and mostly highlights women, which is why I read it cover to cover every month.

CELEBRATE THE TATAS IN CHARLOTTE
“Baring It All for Breast Cancer,” published in the January/February issue and featuring Hadassah’s former National President Marcie Natan and Hadassah Greater Atlanta’s Breast Strokes program, was an exciting story. We are thrilled to see the growth of this program across the United States.

​We feel that it is important to add that the Atlanta event was based on Hadassah Charlotte’s original program, Celebrate the TaTas, which our chapter has continued to run successfully for six consecutive years.

​Hadassah member Talia Goldman, an originator of Celebrate the TaTas, spent numerous hours on phone calls with the Atlanta group to help with planning. In fact, in 2012, Natan was the featured speaker at the Celebrate the TaTas gala event at Charlotte’s Mint Museum.

​We want to acknowledge the volunteers of the Charlotte Chapter who have put endless hours into securing the success of the TaTas program and raising close to a half million dollars for Hadassah over six years. They have also educated scores of people in their community, collaborated with many health care providers and corporate donors and made mammography available to women who had scant other access.