The rugged jeep snakes, shakes and jostles 6,500 feet up the dusty, one-lane, rock-pitted road toward the remote Nepali village of Hiledevi in the region of Ramechhap. As the driver fearlessly negotiates the road, I focus on the breathtaking, snow-capped Himalayas in the far horizon and the fields of potatoes, rice, yellow-flowered buckwheat and millet on the terraced hillsides. Another jolt of the jeep and the others in the vehicle with me—including Nepali staff of the organization I came to write about—joke that the story will be 40 percent about their group, Tevel b’Tzedek, and 60 percent about the road.

They are right. The story is about the road—not the engineering marvel carved into the mountain but the one Tevel and its intrepid American-born Israeli founder Micha Odenheimer have staked out to fight poverty in Nepal, the nation northwest of India that is ranked the poorest non-African country in the world. In the 10 years since Odenheimer founded Tevel and, later, its Nepali NGO, Nyayik Sansar, nearly 1,000 Jewish participants, most of them Israeli, have helped 40,000 poor and marginalized people in Nepal’s slums and villages.

Odenheimer’s philosophy is embedded in Tevel b’Tzedek’s name, a biblical phrase that means “the earth in justice.” Judaism, says the 58-year-old Orthodox rabbi, journalist and social activist, “is not only about going inward for our own history but also about creating a more just, compassionate and beautiful world.”

Volunteers participate in one of Tevel’s two programs: In the one-month Exchange for Change, informally known as the backpacker’s program, participants live with Nepali families and volunteer in a village. The seven-month fellowship for young professionals offers four tracks—women’s empowerment, youth, education and agriculture. The fellows are stationed in Kathmandu, Nepal’s capital and Tevel’s home base, as well as in five rural areas. There are currently 14 Jewish fellows from Israel and abroad (the United States, Canada, South Africa, Argentina) and 14 Nepali fellows. In addition, 40 Youth Community Mobilizers from the villages serve for two years post-high school in their own communities, a concept drawn from the Israel Scouts’ shnat sherut, a year of community service. They receive a small stipend as well as vocational training.

Tevel’s volunteer programs are only part of its activities. Subsidized largely by donors, foundations and the American Jewish Joint Distribution Committee, the organization has a full-time staff of four Israelis and 60 Nepalis working in the field on development projects. Tevel was on the ground during the April 2015 earthquake that killed over 8,000, injured 22,000 and destroyed thousands of homes and public buildings. Villages remain in crisis, unable to grow enough food for sustenance, much less to provide health and educational services, Odenheimer notes.

Even before the earthquake, many men and even whole families migrated to the cities seeking employment, often in Nepal’s brick factories—infamous for their poor working conditions and polluted environment—losing their land and settling in slums. Hoping to stem the flow of jobseekers to the cities, Nepal’s government has contracted with Tevel to implement a three-year program impacting 25,000 villagers. Many farming families are learning advanced agricultural skills and are producing enough food to feed themselves, enabling them to stay in their ancestral homes. “That,” says Odenheimer, “is transformational.”

On a trip to India and Nepal in 2006, Odenheimer noticed that many young Israeli backpackers were reveling in hatiyul hagadol (the “big trip” many Israelis take after their army service) but had few Jewish-based volunteer opportunities. “I wanted to influence a generation of young Israelis,” he says, envisioning his organization as a Jewish Peace Corps. “Tevel is a lab for connecting Jews to the developing world in an era of globalization and for building a community of activists who can change the world.” Odenheimer lives in Israel and returns to Nepal two or three times a year to mentor and train new fellows.

The passengers with me on the ride to Hiledevi include Nepali native Gautam Bajagain, 30, Tevel’s program coordinator, and two experts who will inspect the beehives that villagers installed during an earlier 10-day training session for Tevel’s new beekeeping project. “Yalla,” says Bajagain, as we disembark in the village, population 4,000, and descend steep paths that overlook fields of bright yellow, pollen-filled mustard plants. At one farmer’s home, the extended family welcomes us in typical Nepali fashion by dabbing our foreheads with a red tika (dot) made of vermilion powder and placing marigold garlands around our necks. Then they gather around for the honey harvest. Each of the seven combs is sprayed to drive away the bees, the wax is scraped off and the combs are placed one at a time in a large vat, which is turned by hand to release and filter the honey. 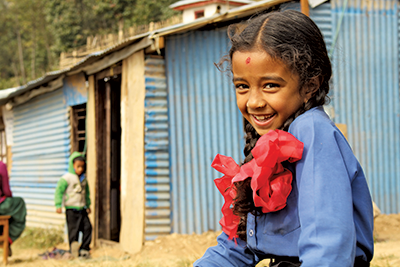 I befriend Sangita Khadka, the farmer’s 20-year-old married daughter—vivid in a richly embroidered hot pink tunic over flowing red pants—and her baby. She points out a small farm of potatoes, cilantro, lettuce, radishes, pumpkins and watermelons as well as eight goats for meat and three water buffaloes for milk. In Hiledevi and other villages, Tevel has created 25 teaching farms to introduce new crops like ginger, winter vegetables and off-season tomatoes as well as irrigation and organic farming methods with the goal of forming commercial cooperatives.

Almost 222,000 pounds of vegetables were harvested on these farms in 2016. The agricultural initiatives in turn increase income and good nutrition, which help reduce the 50 percent rate of malnourishment among Nepali children, according to Bishnu Chapagain, 52, Tevel’s country director, who has a Ph.D. in plant science from Ben-Gurion University of the Negev.

Women like Khadka are at the heart of Tevel’s work; they comprise 70 percent of the farmers and are also teachers, leaders and community mobilizers. Most of the village men leave to find work in Kathmandu, as did Khadka’s husband.

Health is covered under women’s empowerment: A program about sexually transmitted diseases and uterine prolapse prompted 500 women to come to a mobile clinic in Ramechhap to be checked.

At another women’s workshop, “we thought we would talk about preparedness for disasters like earthquakes,” says Yuval Behar, 47, the crisis seminar leader, but instead participants asked to talk about domestic violence, a common problem. The challenge, says Behar, is for concepts like women’s equality to be absorbed into “a culture where men still tell their wives what to wear and what vegetables to buy in the grocery every day.”

Later, when I ask Bajagain what he thinks of women’s empowerment, he answers that if you empower women, “everything will go well, from income to health.”

The shabbat morning sun rises early over the mountains, spreading over fields of buckwheat, citron trees and red hibiscus. “I love this place,” says Nepali Rajkumari Dura, 30, Tevel’s coordinator of women’s programming. “I have a strong attachment to these women. As I’m informing them I’m also learning and collecting power from them.” She talks with Sita Khadka, who is dressed in a maroon sweater and gold earrings, her black hair tied back with a red scrunchie. Khadka, 33, works in the fields from morning to evening and takes care of her three children and numerous animals. “My power comes from my will to give my children a good education and to be strong economically,” Dura translates Khadka’s words. Khadka’s husband in Kathmandu is supportive but, she adds, “Women work a lot but the men don’t think it’s meaningful work because it’s household work.”

The remoteness of the villages presents physical challenges, but the volunteers persevere: They hike the mountains; share unheated cabins, outdoor squat toilets and showers; and carry water from village taps since there is no running water.

I recall the words of Gal Vinikov, Tevel’s international staff coordinator: “It’s an equalizer when educated people come to the village to live a modest life. Helping someone doesn’t make you better than they are.”

For Yarden Kopfstein, 22, a Tevel fellow and an observant Jerusalemite who finished her army service last year, the youth track is a good fit. She was a leader in Bnei Akiva, a religious Zionist youth group, and also served as a guide in the Israel Scouts. Through theater, art, photography and journalism, she and other Tevel volunteers train and encourage Nepali youth to become active in the Hami Yuva (We Are the Youth) movement. Kopfstein says learning about another culture but “doing it from the inside” attracted her to enroll in Tevel.

The Hiledevi school houses a temporary learning complex with an early childhood development center and a secondary school that hums with science and computer labs. Bare classrooms have been transformed into comfortable learning environments with wall drawings, carpets and toys. 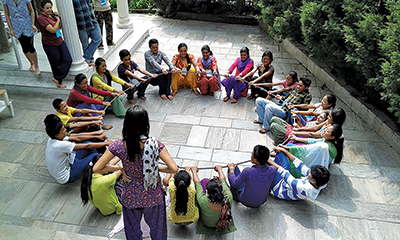 Rajan Panday, 9, has lived with relatives in the nearby village of Bethan since his mother became sick and his father developed a mental illness. “I started to go to school,” Panday says, sharing his story through a relative, “but due to our poverty I had no uniform, station-ery or schoolbag.” Through Tevel’s intervention, Panday received school supplies, started participating in a homework club and has improved his attendance.

Aviela Weltman, 24, was a Tevel fellow in 2015, made aliyah and now supervises Tevel’s seven-month fellowship. The Camp Young Judaea Midwest alumna redirected her career path from broadcast journalism to international development aid work. “I have learned to bridge the gaps in culture and work towards a common cause, to be more humble and to listen to others,” says Weltman. Tevel’s approach is “let’s discuss and see what is best for you.”

Weltman serves as my guide in Kathmandu and takes me to Tevel’s community center in Kalimati, a neighborhood with a large vegetable bazaar that attracts migrant workers; there is also a landfill and dumpsters that they pick through to find items to resell. To build a strong community, Tevel established the center to create a safe, central space for day care programs that now serves 50 children; nine youth groups that cull their 170 members from four nearby schools; and women’s groups with 70 participants.

“There are many things I cannot say to anybody, but this is a good platform to help release tension,” explains Kalpana Ghimire, 26, who faces marital and economic struggles. She is one of a dozen women—mostly domestic workers ranging in age from 19 to 50—who sit in a circle on the floor and share their concerns.

In addition to its tikkun olam mission, Tevel functions as a multicultural exchange. Weltman spent the five-day Hindu festival of Tihar at a Nepali friend’s house. On Simchat Torah, the Nepali fellows danced for hours to Hasidic niggunim along with Middle Eastern and Israeli music.

Beyond the collective, it is the stories of individuals like Bijay Thapa that make Odenheimer proud. Thapa was part of a landless and poor community working in a stone quarry by the side of a river pulling boulders from the water and smashing them into rubble for concrete. From the age of 8, he, his parents and his two brothers lived in a makeshift plastic tent that flooded during the monsoons and was blazing hot in the late spring and summer. When Thapa was 14, Tevel came to the quarry, involved him in Hami Yuva, and later provided a scholarship for him to attend university. Thapa, now 23, has returned as a fellow in Ramechhap.

“I want to be an example, a role model,” he says. “I want to tell the young people in the village that it is possible to overcome every obstacle if you have determination and the right kind of help.”

A Date with Destiny