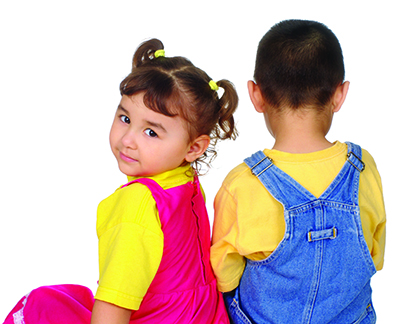 Two years ago, a little girl was born in Gaza into a Muslim culture where families tend to value sons more highly than daughters. It was not until several months later that the child’s mother noticed something different about her 10th baby: The child seemed to have testicles inside her genitalia. The mother anxiously confided in her husband. He was jubilant at the idea of having a son and immediately gave the infant a new name—Muhammad.

Muhammad (his name has been changed to protect his privacy) had testes, but his genitalia looked female, at least externally; the child had no uterus or other internal female organs. His mother feared his life would be difficult if he were to be raised a man, while his father insisted that they find a doctor who would give the baby fully male genitalia.

Thus began a trek by mother and child to Palestinian and Israeli doctors and hospitals that ended a half-year later at the Hadassah-Hebrew University Medical Center in Jerusalem. “Muhammad’s condition was far from life threatening, but because determination of gender impacts so critically on the emotional well-being of both child and family, we treated it as a medical emergency,” said Dr. David Zangen, director of Pediatric Endocrinology at the Hadassah Medical Organization.

A multidisciplinary team established at Hadassah three years ago to address disorders of sexual development met to diagnose the child. Geneticists found that Muhammad had XY chromosomes—and was therefore chromosomally male. Endocrinologists diagnosed the child with an inherited condition, 5-alpha reductase deficiency, which affects male sexual development, and predicted he would likely become more visibly male with puberty, developing male secondary sexual characteristics such as body hair and a deep voice. But the urologists on the team said there was no tissue from which to fashion a penis; they advised removing the testes and administering estrogen to better serve the child’s welfare. The team’s psychologists and social workers weighed in with critical nonmedical factors: on the one hand, the father’s overwhelming desire for a son; on the other, life for a man whose anatomy looked female.

“I thought about the life the patient would lead as an infertile woman in Gaza,” said Dr. Zangen. “She would remain unmarried, in her father’s house, a burden and a stigma to her family. And I thought about life there as an infertile male. He would have a job, friends, contribute to his society. It was clear we must do everything possible for Muhammad to live his life as a man.”

The team prescribed a testosterone preparation that was applied regularly to the child’s genitals. It triggered sufficient tissue growth for Hadassah’s urologists to surgically fashion a penis for Muhammad. He is still years from puberty, but with his XY male chromosomes, there is a possibility that he will be fertile once he matures.

Muhammad is one of dozens of children with ambiguous genitalia treated at Hadassah each year. (This is distinct from transgender, where gender identity is at odds with physical sexual identity.) Their condition, known as XY and XX disorders of sexual development, is found in all cultures and ethnicities, but a majority of patients treated at Hadassah in Jerusalem are from the Palestinian community, which largely practices in-group marriage. Their form of the disorder results from recessive inheritance, meaning a child inherited mutated genes from parents who are both carriers.

“Hadassah is uniquely placed,” said Dr. Zangen. “It’s an advanced medical center with sophisticated research capability located in close geographic proximity to a heavily consanguineous population. Because [Palestinians] marry mostly within their community, we see many challenging conditions among them, several not encountered anywhere else.”

It is a situation that has enabled Hadassah teams not only to diagnose and treat the disorder, but also to find reasons why people develop as gender mosaics—the medical condition in which cells within one person have a different genetic makeup—when and how this happens and, perhaps, how it may be prevented.​

“Sex is determined at three main stages,” explained Dr. Zangen. “The first is at conception, when a chromosomal aberration may transmit an ambiguous mixture—say, XXY instead of XX for a female or XY for a male. Second is when specific genes begin signaling the embryo’s gonad cells to differentiate into testes or ovaries. And third is when testes and ovaries start secreting hormones—testosterone in the former and estrogen in the latter—that generate male and female characteristics, from penis to facial hair or breasts to menstruation. Our contribution, thus far, has been largely to the second stage.” To date, Dr. Zangen’s research group has identified four genes essential to development of the ovaries, in collaboration with the laboratory of Dr. Ephrat Levy-Lahad, director of the Medical Genetics Institute at Shaare Zedek Medical Center and associate professor of Internal Medicine and Medical Genetics at the Hebrew University-Hadassah Medical School.

The contribution of Dr. Zangen’s group has been significant. Much has been learned since the 1990s about the genes involved in development of the testes, but next to nothing was known or understood about those involved in ovarian development. “Because we treat communities that practice endogamy,” he said, “we encounter rare mutations. When the mutation interferes with ovarian development, we know that a particular gene is playing a role. So our gene search is narrowed down to relatively small fragments of DNA.”

Four female Palestinian cousins in their late teens led the way to the team’s most recent gene discovery. The young women all had XX chromosomes but none had entered puberty. The Hadassah group diagnosed ovarian dysgenesis—underdeveloped ovaries unable to produce the hormones necessary for sexual maturity.

“Since the four were first cousins, we looked for a genetic cause,” said Dr. Zangen. “The usual pattern is a mutation in a shared great-grandparent unwittingly transmitted to members of the next two generations. It causes no harm until third-generation carrier-cousins marry one another, creating a one-in-four chance of their children receiving the mutation from both parents.”

Treatment was straightforward. Replacement hormones induced menstruation and typical development in all four women. But the cousins had brought the Hadassah team a genetic treasure map.

The genetic regions they had in common, unshared with their healthy relatives, showed up on genomic mapping and pointed the way to the mutation. It was found on the gene Nucleoporin 107. To verify their finding, the researchers generated fruit flies with the same Nup107 mutation. Most of the flies were unable to produce eggs; the eggs of those that did were deformed. The report of this study was chosen as the cover story for the Journal of Clinical Investigation’s November 2015 edition.

“Everything we learn about the disorder not only contributes to faster and more accurate diagnosis of patients and carriers,” said Dr. Zangen, “it’s also a basis for prenatal diagnosis and, hopefully, in the future, treatment of wider problems of infertility and premature ovarian failure.”

Disorders of sexual development fall into half a dozen broad categories. The most frequent of them is congenital adrenal hyperplasia and occurs in one in 15,000 newborn infants around the world, according to the National Institutes of Health. In congenital adrenal hyperplasia, excessive male hormones are produced, which may result in problems such as an enlarged clitoris in female children and unusually fast development in male children.

“Each disorder has its own experience and own pathophysiological route,” said Dr. Zangen. “The physician’s role, in this as in any other condition, is diagnosis and prognosis: check for internal reproductive organs and perform chromosomal analyses, then assess fertility potential, the ability to produce apposite hormones and future health risks. It’s important to get it right and assign the child the appropriate gender as close to birth as possible to prevent emotional disaster at puberty.”

Keenly aware of a recent Human Rights Watch report demanding an end to “medically unnecessary” and “nonconsensual” surgery that fits children “to a gender they have not chosen,” Dr. Zangen stressed “there’s nothing automatic about assigning gender at Hadassah. That’s why we field such a highly specialized multidisciplinary team. Endocrinologists, surgeons, urologists, geneticists, psychologists, social workers and more work together to get it right.”

Eighteen instances of congenital adrenal hyperplasia have been treated surgically at Hadassah in the past three years. The most recent was in September, when urologists removed testicles from the abdominal cavity of a 14-year-old girl. Born with a vagina, her voice had deepened and body hair began growing as she entered adolescence. “Her gender identity is female,” said pediatric urologist Dr. Guy Hidash, who led the surgical team. “Testicular removal was thus an essential step in terms of her overall health.”

Chromosomes are correlated with sexual development but they do not dictate it, Dr. Zangen noted. Genotyping a patient as XX or XY is thus a guide to helping determine their gender identity, not a hard-and-fast rule. In so sensitive an area, the way that patients with disorders of sexual development perceive their gender is a vital part of the picture, as he underscored with the story of another patient—a child born in Bethlehem with an undeveloped abdominal wall through which the intestines protruded. “This turned out to be only part of the child’s problems,” he said. “Although the chromosomes were XY, defining a male, there were no identifiable gonads of any kind.”

The child was seen through several surgeries to repair the abdominal wall and urinary tract and was eventually taken home by adoptive parents who raised the child as a girl. When she was about 10, she began dressing as a boy and demanding to be treated as one.

“She was 14 when I first met her,” said Dr. Zangen. “By then, she’d been to a number of different hospitals asking for gender change. All had told her it couldn’t be done. I was about to agree, when this unhappy teen looked me resolutely in the eye and said: ‘Doctor, I want to be a man. I want to be David. I am David.’

“Logically it made sense to us for the youngster to remain as she appeared physically, and as she’d been raised and socialized—which was female, even though she had no uterus or ovaries and would depend on estrogen for breast development.”​

But Dr. Zangen “was gripped by the youngster’s utter certainty, the intense longing,” he recalled. “I convinced my medical team we should go with the patient’s decision. We administered testosterone—as we continue to do—and puberty began within the month. David is now 27, working and enjoying life. His is a salutary case—a reminder that with all the help physicians can give to children with disorders of sexual development, the final decision on whether life is lived as a man or a woman belongs with the individual.”