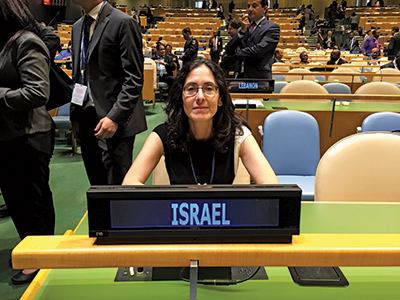 Ambassador Noa Furman, the new deputy permanent representative at Israel’s mission to the United Nations, calls herself an “accidental diplomat.” Born in Ramat Gan, Israel, the 47-year-old earned degrees in political science and law from Tel Aviv University before applying for a position at the Foreign Ministry. She has served in Australia, Dakar, Senegal and Switzerland and is now back for her second United Nations post; she headed the mission’s Human Rights Bureau from 2010 to 2014.

This November, Furman, who is in New York with her husband and two teenagers, will help mark a historic anniversary. Seventy years ago, on November 29, 1947, the General Assembly voted for the United Nations Partition Plan for Palestine, which led to the establishment of the Jewish state.

What does it mean to you that you are the first female to serve in the No. 2 position at Israel’s mission to the United Nations?

There has been a lot of coverage of United States Ambassador to the United Nations Nikki Haley’s positive stance toward Israel. Do you notice a difference in the atmosphere?

Ambassador Haley doesn’t shy away from telling the truth—which is that Israel is discriminated against at the United Nations. You definitely feel there is a new spirit here. I have to say it’s not just Ambassador Haley. We also have a new secretary-general (António Guterres, former prime minister of Portugal) who is aware of the unjust treatment of Israel at the United Nations. Can I tell you we are fully content? No. We still have 20 resolutions against Israel every year. We still have too many debates against Israel. We have a long way to go before we can say we get equal treatment.

You have described the United Nations Convention on Rights of Persons with Disabilities as a turning point for Israel in large part because Israel, under your leadership, was one of the primary movers behind the convention, which was signed in 2006 and ratified by Israel in 2012. What recent breakthroughs for Israel at the United Nations can you point to?

In May, the Commission on the Status of Women passed an Israeli-initiated resolution on sexual harassment in the workplace. People thought it would be hard to do because many Arab and Muslim countries object to anything Israel does. But it was adopted by consensus. Countries realized if they voted against it, the implication would be they are for sexual harassment. That was a major achievement.

What do people misunderstand about the work of the United Nations and how it can impact lives?

The Security Council deals with many headline-making issues, but I actually think the development side of the United Nations reaches more people. It can be fighting childhood marriage, genital mutilation or human trafficking. At the end of the day, if a country prohibits the marriage of 12-year-old girls and puts more emphasis on those girls going to school, then we aren’t just changing the lives of these girls. We are changing a whole country in terms of its development.

Israel’s mission is planning to host a re-enactment of the Partition Plan vote at the Queens Museum in Queens, N.Y., which was the site of the original United Nations General Assembly. What does the anniversary mean to you on a personal level?

My first childhood recollection was the 1973 Yom Kippur War. I was 3 and my mother had just given birth. I remember going up and down the stairs to the bomb shelters. She was carrying my newborn sister, I was holding her hand. My father was called up to serve; he wasn’t there. I’m lucky that I can almost take Israel for granted because when you look at the big picture, there were many times where we might not have made it. We really have a lot to be proud of. We’re here to stay.

Cathryn J. Prince  is a freelance journalist and nonfiction author based in Connecticut.