The UN Partition Plan at 70 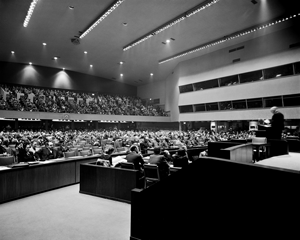 After celebrating 100 years since the Balfour Declaration on November 2, next up on the Zionist anniversary calendar is November 29. From our November/December 2017 issue:

“His majesty’s government view with favor the establishment in Palestine of a national home for the Jewish people, and will use their best endeavors to facilitate the achievement of this object.” British Foreign Secretary Arthur James Balfour recorded those sentiments in a declaration to Lord Walter Rothschild, a prominent representative of the British Jewish community, on November 2, 1917, while World War I was raging. The nations of the world, preoccupied with the shifting balance of power in Europe, were decidedly not focused on Zionism or the continued persecution of Jews across Europe and Russia. In this unfavorable political climate, the declaration represents the steadfast efforts of our Zionist ancestors to make their voices heard.

​Fast forward 30 years to November 29, 1947: The United Nations General Assembly voted in favor of Resolution 181 (II), known as the U.N. Partition Plan. The four-part plan called for the establishment of both an Arab and Jewish state in the former British Mandate of Palestine. The land would be divided into eight areas: three each to the Arab and Jewish states; the seventh district would include an Arab enclave inside a Jewish territory; and the eighth area, Jerusalem, would be administered by the United Nations Trusteeship Council.

​As we remember these momentous anniversaries, let us rededicate our efforts to promote Zionism in our time.