Hard-Won Lessons from a Survivor-Psychologist 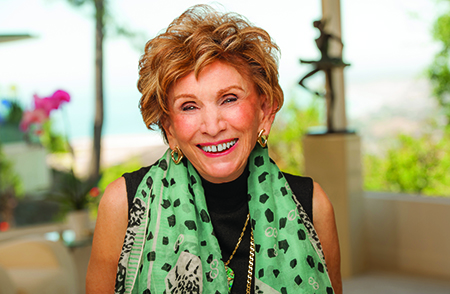 I had just turned 16 when I was taken with my family from Kassa, Hungary, to Auschwitz. Despite the horrors and misery of the camp, I was intensely curious about my surroundings, trying to make sense of the world I had been forced to inhabit. Even today, at almost 90, I am still curious about what makes people choose to fight to survive or give in to despair, to be kind or cruel under hardship conditions.

Many of the people I treat in my psychology practice have survived traumatic events. I have found that my own struggles through and ultimately past adversity have become a source of bonding with them, providing strength in healing.

In Auschwitz, I went from feeling victimized by my jailors to the realization that I might have the inner resources to outlast them, that somehow my determination to live would help me outwit them, despite their decision to eliminate us, as human beings and Jews. “The will to existence”—a term coined by psychiatrist Dr. Arthur Kornhaber—was made real for me after the despair of seeing my mother escorted to the gas chambers and the memory of her telling my sister Magda and me as we sat together in the cattle car to Auschwitz: “What you put inside your mind, no one can take away.” Even as I put on the striped uniform of a prisoner and had my head shaved bald, I committed to a return to normalcy one day, to thoughts of being a teenage girl and training in gymnastics and dance.

My first test of endurance came quickly, when the infamous Dr. Josef Mengele greeted the newcomers and asked what talents we had brought to the camp. The girls from my city, who knew I’d trained in ballet, pushed me forward. I stood before the “Angel of Death”—who only hours before had sent my mother to die.

“Dance for me,” he said. My limbs were heavy as in a nightmare when there is danger and you can’t run away. “Dance!” he commanded again, and I felt my body start to move. At that moment, I made the choice to live a few minutes of normalcy, at least in my imagination. With my eyes closed, I was suddenly Juliet on the Budapest Opera House stage, starting a mournful dance above the body of Romeo. That was when I discovered the power of turning within, of empowering my mind, heart and spirit with my own positive thoughts and memories.

My road out of hell—from Auschwitz, from stints of forced labor in various factories, from the death march to Mauthausen and Gunskirchen Lager, then back to Koŝice (as Kassa was renamed under Communist Slovakia)—eventually brought me to Vienna, marriage, motherhood and relocation to the United States. In the United States, first in Baltimore, then in El Paso, I struggled to learn and embrace a new language and culture. Little by little, I became quiet and quieter and began turning away from myself. Somehow, my captivity and liberation no longer seemed relevant; I was just another immigrant trying to make the grade in the American melting pot.

At 40 years old, I returned to school, my studies compelling me to delve into my own history of abjection and horror. I graduated from college and earned a master’s degree in educational psychology and a doctorate in clinical psychology, working as a teacher before becoming a therapist. Despite my achievements, I did not feel redeemed. I was still searching for my larger purpose: If you are going to live, you have to stand for something.

During my time in captivity, confronting fear and taking action helped me fight off the numbness that persistent contact with arbitrary authority can create. Learning to face fear became an effective technique to recapture self-esteem—one I share with my patients.

Often the patients I work with mirror my own discoveries about the journey to freedom. Equally often, they teach me that my search for freedom isn’t complete—and they point me in the direction of further healing.

In 1980, when Captain Jason Fuller became my patient, I had begun to formulate a new relationship with my own trauma. It was no longer something to silence, suppress, avoid or negate. It was a well I could draw on, a deep source of understanding and intuition about my patients, their pain and the path to healing.

When Fuller first visited me, he was silent, frozen. He could neither name his problem nor express his feelings. Eventually, I taught him a mantra for managing his emotions: notice, accept, check, stay. As he learned to face his rage—his wife had been cheating on him—he also began to see that in many ways he was recreating in his current family the fear, repression and violence of his childhood learned at the hand of an abusive father. Sometimes our healing helps us to repair our relationships with our partners; sometimes our healing releases the other person to do his or her own growth.

In 1990, I returned to Auschwitz to mourn the dead and celebrate the living. I also needed to formally put an end to the denial that I had been a victim and to assign guilt to the oppressor. I needed to touch the walls and smell the latrine to re-experience my own reality, to de-grief, so to speak.

It is not always possible for victims to return to the place where pain was visited upon them. But I encourage patients to re-live the dreadful events in as much detail as memory can muster, all the while observing their own emotional and physical reactions.

The next step in recovery often comes from opening up about one’s affliction, not just as a personal catharsis but in the hope that others can benefit from it. I once asked an audience of 300 university students how many of them knew what happened at Auschwitz. Only four hands went up. How was that possible? It was then that I decided to go public with my story. I am no longer quiet.

Edith Eva Eger, a clinical psychologist based in La Jolla, Calif., is the author of the recently published The Choice: Embrace the Possible (Scribner).