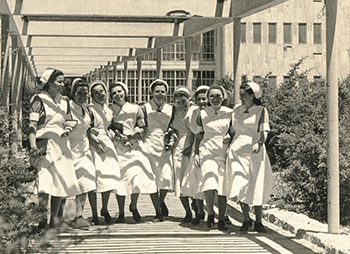 Seeking Those With Ties to Hadassah Nursing School

If you attended the henrietta Szold Hadassah-Hebrew University School of Nursing or were a nurse at Hadassah’s hospitals in Israel, we want to hear your story and share your memories of your time at Hadassah during the school’s centennial festivities this year. If your grandmother, mother, aunt, friend or other family member was a graduate of the school, worked at Hadassah’s hospitals or inspired you to become a nurse, we want to hear those stories, too, and see any photos you may have.

​Please write your story in 700 words or less, and include as many details as possible. Send email submissions and scanned photos to Renee Young at communication@hadassah.org. 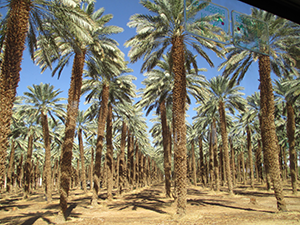 Kibbutz Ketura was founded in 1973 by a group of Young Judaea graduates who sought a deeper connection to Zionism following the Six-Day War. Today, it is an idyllic desert oasis located about 30 miles north of Eilat in southern Israel and houses the Arava Institute for Environmental Studies. The institute—founded in 1996 in the wake of the Oslo peace agreements—recruits Israeli, American, Palestinian and Jordanian students for semester or yearlong opportunities to study environmental leadership, sustainable agriculture, peace-building and more. Hadassah’s team at the United Nations makes it a point to mention the work being done at the Arava Institute at their meetings with international organizations and United Nations’ officials, highlighting its groundbreaking environmental research as well as its mission to advance cross-border environmental cooperation in the face of political conflict.

​The Arava Institute is currently engaged in a uniquely Zionist effort—the Middle Eastern Medicinal Plant Project (MEMP), an evolving academic exploration of the significance of Tu B’Shevat. MEMP researchers protect and propagate the rare medicinal and biblical plants of the southern Negev and Dead Sea area. Funded by the Louis L. Borick Natural Medicine Research Center, part of the Hadassah Medical Organization in Jerusalem, MEMP is domesticating several trees, including varieties of neem and artemisia, to research their uses in treating different kinds of cancers as well as malaria, without disturbing local flora. From 2004 to 2014, they undertook a project to make the neem tree salt tolerant. They succeeded, and have since planted hundreds of the trees in neighboring kibbutzim and in local towns near the sea.

​By cultivating rare and ancient trees in their native environment, researchers at Kibbutz Ketura are practicing a special kind of Zionism, one that blends ancient agricultural and medicinal wisdom with modern technology. While for most Jews, Tu B’Shevat is just one day, at Ketura, the ethos of the holiday lasts all year.

Michelle Goldberg of Seattle, Wash., is a successful career woman who has brought her considerable executive skills to Hadassah. After graduating from the University of Washington in Seattle, Goldberg, who says she is somewhat shy, was looking to connect to the local Jewish community. She attended a Hadassah event for business professionals in 1985 that featured Deborah Kaplan, who would later lead National Hadassah from 1991 to 1995. Kaplan’s vibrant words motivated Goldberg to become the local Hadassah Medical Organization chair. After holding many portfolios, including group president, Goldberg participated in what she describes as a life-changing Young Women’s Mission to Israel in 1997. Key to her further involvement in Hadassah was meeting then-National President Marlene Post on the trip.

​As president of the Pacific Northwest Region, Goldberg attended the Hadassah National Convention in Phoenix, Ariz., in 2004. As a delegate, she voted to build the new Sarah Wetsman Davidson Hospital Tower. Today, with a great sense of pride, she has seen the tower come to fruition.

​But the skill sharing hasn’t been all one-way: Goldberg credits Hadassah for several skills she has transferred to her position as a senior business analyst at Puget Sound Energy. Through her work with Hadassah, she says, she learned to be patient and detailed-oriented as well as how to inspire others as a public speaker. Underpinning it all remains her strong belief in the mission of Hadassah and her personal love of Israel. “Every time I go to Israel,” says Goldberg, “I learn something new—a feeling of belonging, always a place where you can go.”

​Goldberg’s family has had a huge influence in molding her Zionist and philanthropic values. Her parents actively believed in tikkun olam and worked to repair the world through their Portland, Ore., synagogue, Jewish community center and Jewish home for the aged. As a child, she recalls, her parents counseled her often: “Give tzedekah, give of yourself.”

​Goldberg is a member of the Circle of Founders and a Keeper of the Gate; she is a three-generation life member. Her close family includes two brothers, a sister-in-law, two nephews and a niece. —Sandra King

Hadassah on the Cutting Edge of Rare Disease Research

Life in the world of rare diseases is agonizingly slow and, simultaneously, stunningly fast. Slow: the process to raise funds to accomplish research and launch clinical trials to find effective treatments. Fast: the way a progressive disease diminishes the body of my husband, Chuck Saxe, taking away his ability to walk easily down the street, maintain normal bladder and bowel control and talk clearly. For 20 years, Chuck has been fighting Adult Polyglucosan Body Disease, though he only received his diagnosis six years ago.

​Very few Jews have heard of APBD—but it should be as well known to the Ashkenazi community as Tay-Sachs disease, since the carrier frequency rates are similar.

​One out of 48 Ashkenazi Jews is a carrier for APBD, a significantly under-diagnosed disease. Fighting this devastating neurological disorder that hits adults in the prime of life, Dr. Yoseph Caraco and Or Kakhlon, Ph.D., at the Hadassah Medical Center are designing a protocol for a clinical trial for a potential treatment. Could you be a candidate for the trial? Check the bullets of this APBD tool to see who should be tested: