Two history teachers at a small Warsaw high school are taking a stand—at personal risk—against a new law that makes it a crime to say that the Polish nation or Polish state took part in Nazi crimes during the Holocaust.

Shortly before Poland’s president signed the law, teachers Piotr Laskowski and Sebastian Matuszewski penned an open letter to their students. In it, they wrote about the dangers of elevating nationalism over humanity and of the 90 migrants who were desperately trying to reach Europe when they drowned off the coast of Libya on February 2.

“In this letter, as well as in future actions, we are going to break this law,” they wrote. “The concept of the ‘Polish nation’ as well as the institutions of the Polish state (and all other ‘nations’ and states) are co-responsible for the offenses constituting crimes against peace and humanity and for war crimes. ‘Nation’ is a spell capable of turning otherwise non-violent people into unscrupulous murderers convinced of their virtuousness.” They then went on to delineate the Polish state’s agency in committing crimes against Jews during the Holocaust, including the creation of camps and segregation in universities.

Laskowski, a history teacher, and Matuszewski, who teaches the history of philosophy, added that “those in power use the concept of ‘nation’ to offer false pride, a false community, and false protection to those burdened with mortgage…they use it to incite contempt, distrust, and hostility towards ‘strangers,’ to authorize ‘sacred’ egoism, to justify lack of empathy and partiality of views. They use it to suppress the search for truth.”

Violators of the new law face fines as well as up to three years in prison. As widely reported by international media, the law also prohibits saying “Polish death camp” to describe where Jews and others were murdered in Nazi-occupied Poland. While Yad Vashem, Israel’s Holocaust remembrance center and museum, has recognized more than 6,000 Polish Righteous Gentiles who aided Jews, historians widely agree that most Poles were, overall, willing Nazi collaborators. Jews comprised 10 percent of Poland’s population before the Shoah. More than three million Jews—over 90 percent of Polish Jewry—died. 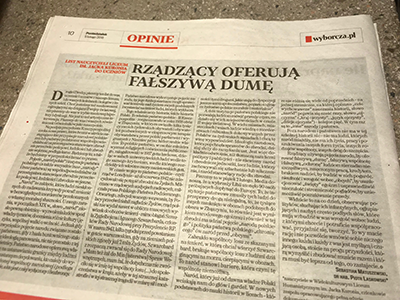 The two men wrote the letter because “we are horrified by what is happening in Poland,” Laskowski said in a phone interview with Hadassah Magazine. “The kind of hostility toward immigrants, the sentiment that we have to protect this national community, is somehow rooted in” the attitudes that led to Polish complicity in the Holocaust, which he said was never taught properly in Poland.

Holocaust education is marginal in Polish government schools, according to Laskowski. In their letter, the teachers stressed that “ ‘Nation’ is what Polish authorities keep cramming into our heads and pushing down our throats. In the new history curriculum for high schools—after all, not so different from the old one—on a single page…the word ‘nation’ appears six times, the word ‘fatherland’ five times.” There is just one reference to ‘other’ nations.

The private high school where they teach requires students to study two foreign languages in addition to English. Yiddish is one of the options, and theirs may be the only high school in Poland to offer it, said Laskowski.

Karo Wegner, 19, is a former student at the school who is now in university but returns once a week to work on special projects. Wegner has hung their letter over her desk, she said in a Skype interview, and sent it around the world to people she met at summer Yiddish programs in Vilnius and New York. She described the letter as “empowering.”

“You feel that there are other people who think there is something wrong going on,” she said. ”I’d like people both in Poland and all over the world to notice that there is such a voice” countering “this nationalism, which is happening not only in Poland.

“What scares me about nationalists is that there is always ‘we’ and the others,” added Wegner, who first studied Yiddish at the high school and continues to do so through online courses offered by the Workmen’s Circle. “There is no trying to understand the others. That’s a problem. We are all people and I don’t see why we should fight with each other. It’s not good for any of us.”

Like Wegner, neither Laskowski nor Matuszewski is Jewish. In addition to their teaching positions, both serve as editors of the Ringelblum Archive, the trove of 30,000 documents written by Jews in the Warsaw Ghetto detailing every aspect of life as experienced by the 400,000 plus Jews who lived there from 1940 to 1943. The documents have been published in 37 Polish-language volumes, Laskowski said. The first English-language volume was published this year.

For Laskowski, editing the archive is “a kind of duty to the people who died. If you live in Warsaw, you become aware that there was a Jewish community that was part of this society and murdered on this soil,” he told Hadassah Magazine. “You feel obliged to not let people forget.”

The response to their letter has been “unexpectedly warm,” he said, both from young people and older Poles. Except for one article, there has been little response from state-sponsored media or the government itself, Laskowski noted. The open letter had fewer negative hate comments than they expected, he said.

With the new law and history curriculum, which devotes very little to the Holocaust, the Polish government wants to “enforce their own narrative,” Laskowski said, a narrative that emphasizes Polish heroism. “It is a kind of hysterical patriotic discourse. They are striving to prevent people from telling the truth about Polish complicity in the Shoah. That is something I strongly believe has to be told.”