It is a gorgeous autumn day in New York City. On a rocky hill in the Riverdale section of the Bronx, students at Manhattan College bustle between classes on a campus dotted with trees cloaked in fiery shades of orange, red and yellow. The beauty outside stands in stark contrast to what’s being taught in one classroom at this Catholic school.

​Professor Mehnaz Afridi, an observant Pakistani Muslim who prays daily and fasts for Ramadan, is teaching some 20 students about how the Nazis persuaded Arab leaders in North Africa to turn against the Jews who lived among them. “Fascist Italy broadcast radio programs trying to turn the Arabs against the Jews. Nazis hired Germans who spoke Arabic to broadcast shortwave radio messages to 1.5 million people who listened to the propaganda,” Afridi says during her “Religion and Holocaust” class.

​Building on already simmering resentment against Jews, the Nazi and Fascist effort was largely successful. Though there were more than 800,000 Jews in Arab lands at the time—many for countless generations—“in the minds of Arabs, all Jews were European colonizers,” Afridi tells her students, who are mostly secular Catholics from working-class and immigrant families.

​The impact of those efforts continues to echo today—in the Holocaust denial pervasive in the Arab world and in the Boycott, Divestment and Sanctions movement. The damaging “success” of the anti-Jewish message is clear, Afridi says, “in the conspiratorial perception of Jews all over the Arab world.”

Afridi, 46, is believed to be the only Muslim teacher of the Holocaust in the United States—and likely the world, say experts in the field. In the introduction to her 2017 book, Shoah through Muslim Eyes

(Academic Studies Press), she credits Islam as the foundational model through which she relates to and teaches genocide. “Contrary to its public perception in the contemporary world,” Afridi writes, “the message of Islam has always been a universal one to me—encouraging tolerance, egalitarianism and acceptance of other faiths and cultures.”

​Her work to dispel anti-Semitic stereotypes has won her admirers even among those who initially opposed her 2011 appointment as director of Manhattan College’s Holocaust, Genocide & Interfaith Education Center, known as HGI. Among the most vocal critics was New York State Assemblyman Dov Hikind, who represents a largely ultra-Orthodox district in Brooklyn. At the time, he said that a Muslim being hired to run the center “diminishes the magnitude of the Holocaust as a defining Jewish event.”

Since then, Hikind has become more familiar with her writing and lectures, and his perspective has changed. “I’ve been very touched by what she has said,” he explains. “I think she’s contributing in a very good way toward the conversation. When it comes from someone who’s Muslim, it can be a lot more powerful. Considering all the hate and divisiveness between our people, and the hatred coming from the Muslim world to the Jewish world, there’s no question that having someone like Dr. Afridi going out and spreading more information is good.”

​She also has deeply influenced her students. James Noeker, a Manhattan College graduate who grew up in a politically conservative Irish-Italian town on Long Island, is one example. Noeker, a Catholic who took a required freshman survey class on religion with Afridi, turned to her for counsel when, just a month into his first semester, a classmate in another course called him “filthy Jew.”

​“I was stunned and walked away,” recalls Noeker, 23. Afridi suggested he participate in the HGI fellowship program that pairs Manhattan College students with those at the Modern Orthodox rabbinical school Yeshivat Chovevei Torah, also in Riverdale, to interview Holocaust survivors. Noeker took her advice and, together with a partner, attended a Passover seder—Noeker’s first—and a Kristallnacht commemoration. Noeker’s interview with a survivor was his first experience meeting someone who had lived through the Holocaust.

​In 2016, Noeker became Afridi’s student assistant at HGI and took part in her annual January intercession course in Venice, devoted to the study of “Venice and the Jewish Ghetto.”

​By studying the history of the ghetto, which was established in 1516 and confined Jewish settlement to a tiny island whose two bridges were locked at night, Afridi demonstrates that the lessons of past segregation and prejudice are all too relevant today. In Venice, her students learn about the recent resettlement of Muslim immigrants to the area and the corresponding rise in Islamophobia among Italians.

​“I want students to understand that these are very stereotypical issues that have been going on for a long time,” she says when we sit down for coffee after class in a campus café. Today, no mosques are allowed to serve the large number of Muslim immigrants in the northeast of Italy. “There is a view of Muslims in Venice of being terrorists and incompatible with democracy,” Afridi says, noting that it is much the same attitude Jews faced in the ghetto.

A feeling of discrimination is familiar to Afridi. Born in Pakistan, her father’s work as an international banker meant the family moved frequently, including to Dubai, where all discussion of the Holocaust and Israel was omitted from the curriculum at her elementary school. She recalls security censors coming in to her classroom with scissors and thick black markers to eradicate any mention of either from the school’s European textbooks. After stays in Western Europe, her family eventually moved to Scarsdale, N.Y., when she was 13.

​It was in the tony New York City suburb that Afridi first experienced discrimination. “My parents got phone calls saying ‘Arabs get out,’ ” she says, though Pakistanis aren’t Arab. 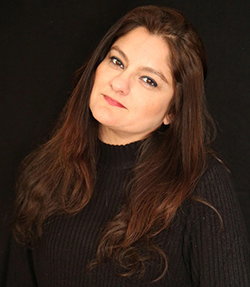 Afridi earned a B.A. in English and religion at Syracuse University and stayed there to pursue a master’s degree in religious studies. (She later got her Ph.D. in religious studies from the University of South Africa.) It was while working with a Jewish studies professor at Syracuse—to whom she was randomly assigned as a teaching assistant—that she was first seriously exposed to the Holocaust.

​She became increasingly interested in understanding why and how the Holocaust happened. “I started to understand why there was the need for the State of Israel,” she says.

Then, in 1995, Afridi won a Hebrew University grant to study biblical archaeology in Jerusalem.

“I was young and naïve and thought I could solve all the problems, like who the land belongs to,” she says with a laugh. She went on archaeological digs over her five-week stay, “looking at different layers of history.” Using her Pakistani passport, she traveled freely through both Israel and the Palestinian territories. Before that, she had felt “an unspoken tension about Israel,” she says. “I came home feeling, ‘God, both these people just want peace.’ ”

​Other moments in her career have also served as personal turning points. In the summer of 2007, after giving a talk at an academic conference in Munich, Afridi visited the Dachau concentration camp. “I wanted to pay respects to the Jews who had perished,” she says. “It’s very bare there, there are a lot of white rocks. It’s very empty and hard to be there.” Standing at a crematorium used to dispose of some of the tens of thousands of people who died at Dachau, Afridi spontaneously began to recite a Muslim prayer that is said when someone dies. In Arabic, she chanted, “Whoever belongs to God goes back to God.”

​“It was a powerful moment,” she recalls. “I couldn’t believe what had happened there.”

Promoting any kind of empathy or understanding of the Holocaust can be risky for Muslims. In 2014, Palestinian Professor Mohammed Dajani Daoudi, then a senior lecturer at East Jerusalem’s Al-Quds University, found that out after he took students to Auschwitz as part of their study of the Holocaust and genocide. His life was threatened and his car set on fire, forcing him to flee the region for a few years.

​It may be easier for a non-Arab Muslim to teach the Holocaust, Afridi acknowledges. “I haven’t gotten any flak from the Muslim community,” she says, but adds: “I know some people are wary of what I do.”

​Tensions around the Israeli-Palestinian conflict further complicate how her work is received. “Accepting Israel publicly as a viable state has been difficult because of the political situation,” Afridi concedes. “But my work is about being critical about anti-Semitism and relativizing the Holocaust.”

​She refuses to be silenced on that mission. “The Shoah is the most inexplicable genocide that I teach, and I want to bring awareness and education to Muslim communities,” she says. “Recently, I was pleased that The Arab Weekly”—an English-language Arab media outlet based in London—“published a great review of my book, and I feel that Muslims have begun to respond more and more to my work.”

​Another priority for her, she says, is publicizing that there were Muslim rescuers of Jews during the Holocaust, mainly in Arab lands. “Why do we not know these stories?” she asks her students. “It became toxic in many Arab countries to be known as someone who rescued Jews. Muslims don’t want to take ownership of it because they would have to admit the extent of the Holocaust.”

​Afridi gives as many as 50 lectures a year in synagogues, Muslim and interfaith settings and at other Catholic colleges. There is more interest in her lecturing about the Holocaust among Jews than Muslims, she says, but she is hopeful that is changing. In 2015, she participated in Hadassah’s landmark Defining Zionism speakers program, in which she described her efforts to increase understanding among different faiths. “I made it my journey,” explains Afridi in one clip from the program, to show “how we can form reconciliation by looking at other people’s sufferings, and also how it’s important to know what happened to the Jews as well as what happened to the Muslims.”

​Today, former student James Noeker is finishing up an M.B.A., though he has moved away from his original plan to go into business. Instead, he plans to pursue a Ph.D. in education and business and, inspired by Afridi, to teach.

​Growing up, all he heard about was “winners and losers,” he says, adding that that’s how business and political discourse are framed in American culture. Through his work with Afridi and HGI, he says, “I saw that it’s not win-lose. That there are ethics and there is doubt and nuance.

​“I never would have stopped thinking in terms of ‘winners’ and ‘losers’ if I hadn’t learned Dr. Afridi’s lessons,” says Noeker. As an educator, “that’s what I’ll try to impart to future generations.”

Debra Nussbaum Cohen is an award-winning journalist and New York-based correspondent for Haaretz. She is also the author of Celebrating Your New Jewish Daughter: Creating Jewish Ways to Welcome Baby Girls Into the Covenant.