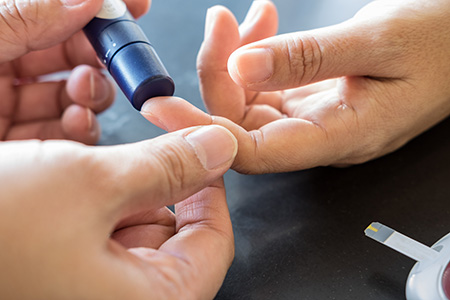 When Ephraim Keidar, an Israel Defense Forces career officer from Rehovot, was diagnosed with diabetes 29 years ago, he “wept like a baby. I was 37, and had never been sick a day in my life,” he said.

Eli Asher of Netanya was 42 when he learned he was diabetic. “The local clinic couldn’t get it under control, and I thought I’d never live normally again,” he said. “Hadassah gave me back my life—as a husband, a father and a lawyer working 12-hour days.”

In contrast, neuropsychologist Lan Lossos was 6 when she was diagnosed, only months after making aliyah from Lithuania. Her mother had described diabetes to the young Lossos as an allergy, and now, at 49, she still sees the disease that way: “I’m not sick,” she said. “I’m someone with a severe sugar allergy.”

Keidar, Asher and Lossos are among some 420 million diabetics worldwide, a number that, according to the World Health Organization, has quadrupled since 1980, will likely hit 640 million by 2040 and is linked to an annual 3.7 million deaths.

“Diabetes is on track to become the largest epidemic in human history,” said Dr. Gil Leibowitz, incoming head of the Hadassah Diabetes Center at the Hadassah-Hebrew University Medical Center in Jerusalem—and himself diabetic since age 7. Hadassah is fighting the disease through education, research and a team approach to utilizing current knowledge and technologies.

A staggering one in 11 adults worldwide fails to secrete sufficient insulin to keep their blood glucose within normal range—largely the result of either type 1 or type 2 diabetes. Type 1, often called juvenile diabetes, is an autoimmune illness associated with strong genetic factors in which the pancreas produces no insulin. In type 2, which typically develops after age 40, insufficient insulin is secreted. Sedentary lifestyles and diets filled with processed foods as well as longer lifespans have made type 2 diabetes one of the most common noncommunicable diseases anywhere, Dr. Leibowitz noted, with its highest rates now in low- and middle-income countries. The two types of diabetes require slightly different treatments, and both types substantially increase the risk of heart attack, stroke, kidney failure, blindness and complications in pregnancy.

Dr. Leibowitz is stepping into big shoes at Hadassah’s diabetes center. His predecessors, Drs. Benjamin Glaser and Itamar Raz, both former heads of Hadassah’s Endocrinology and Metabolism Service as well, are internationally renowned clinicians and academics whose work has been central in making Israel a powerhouse of diabetes research. Today, Dr. Raz heads Israel’s National Diabetes Council and researches the prevention of type 1 diabetes. Dr. Glaser is conducting a major collaborative investigation to develop a blood test that detects not only early-stage diabetes but also neurodegeneration, cancer and traumatic injury. Both men continue to work with Hadassah in researching the disease.

With existing treatment only capable of managing diabetes, “it’s through research that we’ll identify new therapeutic pathways for preventing and treating this scourge,” said Dr. Leibowitz. “Basic and clinical research at Hadassah is undergoing major expansion, and a new state-of-the-art clinical research hub”—one that will provide the diabetes center with more space and new facilities—“is almost complete.”

In the meantime, however, Dr. Leibowitz is utilizing every available clinical tool and technology at Hadassah to combat the disease. He aims to “accelerate the growth of clinical programs” that integrate the expertise of endocrinologists, cardiologists, podiatrists and cardiac, vascular and bariatric surgeons for new medications and surgical solutions.

This team approach has important implications for its patients. “The Hadassah team taught me a hard lesson,” said Keidar, 48, who has adult-onset type 1 diabetes. “I had to learn I have a problem that I must remember 24/7, or pay the price. They taught me how to take care of myself so that I can live like everyone else.” Learning to stabilize his blood sugar levels enabled Keidar “to continue my IDF service till retirement, eight years later,” at the age of 45.

Education is crucial, according to Dr. Leibowitz, especially in preventing type 2 diabetes, which accounts for 90 percent of diabetics worldwide. Obesity is the single best predictor for type 2 diabetes, yet one in three people worldwide is overweight, according to the United States National Institutes of Health. “Convincing people to eat better and exercise more would halt the surge in diabetes incidence,” he said.

A nationwide government program launched in Israel in 2016 has contributed to a slow but growing public awareness of healthy food choices. Developed by the Israel Diabetes Council, of which the Hadassah center is an active part, it includes a school-based intervention program that teaches children healthy eating and supports local lifestyle modification programs.

Healthy living is especially important for those with genetic predisposition to diabetes. The highest incidence of both type 1 and type 2 diabetes in Hadassah patients is found among Ethiopian and Yemenite Jews, while the Palestinian community is particularly susceptible to type 2 diabetes, said Dr. Leibowitz. For Palestinians in East Jerusalem, the Hadassah team has been working with Israel’s largest health maintenance organization, Clalit Health Services, on a program to train Palestinian doctors at the Hadassah Diabetes Center. Currently approved by the Israel Endocrine Society but awaiting Health Ministry approval, the program will, the Hadassah team believes, give a major boost to the health care provided to Palestinian diabetics in Jerusalem.

Type 1 diabetes, too, is receiving additional attention at Hadassah. “While many diabetologists are specialized in treating type 1 in children, there is no straightforward transition from pediatric to adult care of their illness,” said Dr. Leibowitz. “We’re training more experts in type 1 diabetes in adults.”

As a result, the center is focusing on type 1 diabetics, such as Keidar and Asher, whose disease manifests in adulthood. “Doctors assumed I was type 2 because of my age, and that was how they treated me,” said Asher. But then he came to Hadassah, where the diabetes unit tested him for type 1 and gave him the correct treatment. “But they gave me far more than that. They taught me that if I adjust my lifestyle, and think about every morsel that goes into my mouth, I can live a more normal life.”

Hadassah’s inpatients are another major emphasis. Close to a third of the 93,129 patients hospitalized in the medical center last year had diabetes—in addition to the ailment for which they were admitted. “We’ve developed protocols to ensure that the diabetes remains stable during hospitalization and adequately treated after discharge,” said Dr. Leibowitz.

While care continues to improve, the only long-term answers to the diabetes pandemic are prevention or cure. For both, researchers need to know why the vital beta cells that produce, store and release insulin fail in diabetes. “To rescue beta cells,” said Dr. Leibowitz, “we must understand the mechanisms that govern their growth and survival.”

One promising clue has been located in monogenic diabetes, a rare form of the disease caused by a mutation in a single gene. “Our team has identified a mechanism that impairs beta-cell growth in this form of diabetes, using a mutation in the gene responsible for insulin production,” he said. The Hadassah team is collaborating with a University of Helsinki group led by pediatric endocrinologist Dr. Timo Otonkoski, who found the same mutation in young patients. “We’re developing strategies,” Dr. Leibowitz added, “that may open a new treatment avenue.”

Former Hadassah endocrinology head Dr. Glaser is looking at how beta cells are damaged and why they die. With researchers Yuval Dor and Ruth Shemer of the Hadassah-Hebrew University Faculty of Medicine, his study uses a new technology that identifies dying cells in the blood.

“When cells die, their DNA disintegrates and spills into the blood plasma,” he explained. “Cell death can tell us about early-stage pathology, progression of disease, success of treatment and its unintended toxic effects.” In 2013, Dr. Glaser, Dor and Shemer developed a noninvasive way of measuring cell death. With this knowledge, Dr. Glaser said, “we can track tissue damage, effects of medication, blood pressure control and glucose control at different stages of the illness, on different therapies and at different levels of complication.”

This work was published in 2016 in the influential Proceedings of the National Academy of Sciences of the United Sates of America. For the next stage, the team needed a large population with a high incidence of diabetes. They found it in a population of more than 12,000 Aboriginal Australians who are part of a long-term investigation led by Dr. Jonathan Shaw, deputy director of the Baker Heart and Diabetes Institute in Melbourne. The Israeli and Australian teams are conducting a collaborative study of cell death based on the Israeli technique, seed-funded by a Hadassah-Baker funding initiative and the nonprofit Diabetes Australia.

“Our early results are very promising,” said Dr. Glaser. “We’re on the way to deeper understanding of human tissue dynamics as well as to earlier detection and improved monitoring of disorders ranging from diabetes to cancer to neurodegenerative disease. We believe that information obtained from cell fragments will lead to improved personalized treatments with fewer side effects and higher success rates.”