Sex at Any Age 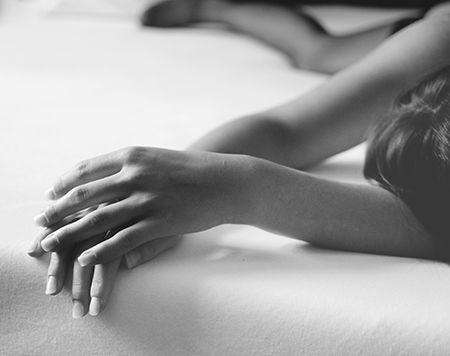 About a year ago, I found myself discussing vaginal lubricants with my 20-year-old granddaughter who was in the throes of her first major romance. She was raving about a silicone-based lubricant that she and her boyfriend enjoyed. Since I was only aware of water-based lubricants, I was curious. “Want to try it?” she asked. “Sure,” I answered. And before I could change my mind, we were driving to the local sex emporium—with the boyfriend along for the ride.

​Was I uncomfortable? You bet! But, I told myself, this is a new era, so just go with it. In the shop, she brightly requested a bottle of Überlube, which was handed to me in a black, unmarked bag, and we left—the kids thinking I was terribly cool. I just felt grateful to have such an open relationship with the daughter of my daughter who was beginning her sexual journey, while I, more than 50 years her senior, was delighted to be continuing mine.

​Sex isn’t something my friends and I talk about much; it’s probably a generational thing. But I wasn’t surprised to learn while researching this article that sexual activity declines with age. Still, the majority of older adults regard sexuality as an important part of life. Sexual satisfaction is one of the measures on any index assessing quality of life, according to nurse-midwife Anna C. Woloski-Wruble, who works at Hadassah Hospital’s sexual health clinics in Jerusalem and co-coordinates a mandatory sexuality course for doctors at its medical school. “People view intimacy and sexuality as a luxury,” said Woloski-Wruble, who also chairs the undergraduate curriculum committee at the Henrietta Szold Hadassah-Hebrew University School of Nursing, but they’re “part and parcel of life satisfaction.”

A major study on the sexuality and health of 1,550 women and 1,455 men ages 57 to 85, published in The New England Journal of Medicine in 2007, documented that the frequency of sexual activity decreases as wrinkles increase. That was corroborated by the recent National Poll on Healthy Aging, a University of Michigan survey of 1,000 adults between the ages of 65 and 80 that found that only 40 percent of respondents were having sex. However, a decrease is not synonymous with a disappearance. As Woloski-Wruble noted, “Menopause does not mean men-o-pause.” In fact, the 2007 article reported that 54 percent of sexually active people ages 75 to 85 had sex two to three times a month and 25 percent, once a week or more.

​Ruth Westheimer, the sex therapist known as Dr. Ruth who brought frank and open talk about sex out of the bedroom and onto the television screen, told me how wise the Jewish sages were to recognize the importance of having sex throughout life, and not simply for the purpose of propagation. “It’s written right in the Talmud,” she pointed out, “that a husband has the obligation after menopause to engage in sex with his wife. In Jewish life, sex is never a sin!”

​There are many reasons women and men say they’re done with sex when the candles on a birthday cake start to mark decades instead of years. The most frequent explanation, especially among older men, is a health problem. Diabetes, prostate issues, chronic pain or the side effects of medication can affect sexual function—usually erections. However, studies show that after menopause women are more likely than men to lose interest. Men have medications like Viagra and Cialis that can help with erectile problems, but there are no drugs to solve one of the major complaints of older women: It takes forever to get aroused. So just accept that along with everything else, orgasms often become less intense with aging. It’s all about the loss of estrogen.

Eventually every woman has to deal with the reality of estrogen depletion that comes postmenopause. Vaginal tissues start to thin, dry out and lose elasticity. The vaginal opening may tighten and the canal can become shorter and narrower, often causing pain during intercourse. Arousal slows down as vaginal nerve endings die. There is a lot less lubrication. All of these changes can take the pleasure out of sex. A small percentage of women have some success with taking testosterone to ramp up sexual desire, but there are no long-term safety studies of the hormone therapy and its effectiveness is not clear.

But the reality is, sex is good for you—physically and psychologically. The North American Menopause Society says that regular sexual activity is important for vaginal health. It stimulates blood flow and keeps your vaginal muscles toned and stretchable; regular sex helps keep the vagina moist and supple. You’d expect that your gynecologist might give you that kind of advice, but the 2007 sexuality study found there’s an abysmal lack of communication about sexual issues between physicians and their patients.

“Women are embarrassed and doctors are uncomfortable,” said Dr. Beverly Vaughn, a gynecologist at Lankenau Medical Center in Wynnewood, Pa., a Philadelphia suburb. She is the rare doctor who routinely asks her patients if they are having any sexual problems. “Women should know that if you are having pain during intercourse, don’t assume it’s a lubrication problem. It can be something else.” (If you don’t feel you can talk to your doctor, go to authoritative sources on the internet; see resource box on the next page.) The most common question her older patients ask is about vaginal dryness. She usually prescribes one of the low-dose vaginal estrogen suppositories that are considered safe and unrelated to breast cancer. (For the most part, hormone replacement therapy is no longer prescribed for vaginal health because the high levels of estrogen have been found to be linked to breast cancer.)

During my research, I learned that you’re more likely to find friendly information at your local sex shop than at your doctor’s office. I stopped into one in my neighborhood called The Pleasure Chest, off Rittenhouse Square in Philadelphia, and had an educational—and nonjudgmental—conversation with Susan Mannino, the owner. When I asked if she had many postmenopausal customers, she looked at me with astonishment.

​We talked about her 100 varieties of vibrators (who knew?), her favorite lubes (like Sliquid, which is water-based and paraben-free), different types of vaginal dilators for women who experience painful intercourse, and more. I also learned that if you are single, divorced or widowed and getting naked again, you should be using a condom to prevent sexually transmitted diseases. Age is no protection. My visit to The Pleasure Chest was a delightful and unexpected crash course in sexual fun. If you want to improve your sex life, I encourage you to visit one of these places, either alone or with your partner.

If, for whatever reason, you are no longer having intercourse, sex therapist Woloski-Wruble of Hadassah Hospital stressed that penetration is only one expression of sexual activity. “Let’s not forget,” she said, “our bodies are blessed with nerve endings from head to toe. The largest sex organ is our skin, and the most active sex organ is our mind.”

​Perhaps the best advice I got came from my new friend at The Pleasure Chest. “Look,” said Mannino. “You don’t ignore taking care of your eyes or your teeth as you get older. Why wouldn’t you maintain your aging sex organs? You can only spend so much time gardening!”

RESOURCES
The North American Menopause Society provides information to help navigate menopause and postmenopause, including the causes and treatments of sexual problems.

MiddlesexMD is a clearinghouse of physician-backed sexual information for menopausal and postmenopausal women and sells a curated selection of products.

Amazon.com is a great go-to for all kinds of erotica and sex toys.

THE DOCTOR IS IN
For vaginal lubrication, gynecologist Dr. Beverly Vaughn suggests the following, most of which require a prescription, so consult with your doctor.

Vagifem, a small pill of estradiol, a form of estrogen, inserted twice weekly in the vagina

Estring, an estradiol ring inserted in the vagina that lasts 12 weeks

Osphena, one of several nonhormonal oral pills that act like estrogen in the vagina by helping stretch vaginal tissue to relieve painful sex and reduce the risk of infection

Intrarosa, a vaginal suppository used at bedtime containing a steroid that replenishes the cells involved in the thinning of the vaginal wall

Replens, an over-the-counter vaginal moisturizer that does not substitute for lubricants

Carol Saline is a journalist, speaker and author of the photo-essay books Sisters and Mothers & Daughters.