Budo for Peace in the Middle East

An Iranian karate teacher walks into an Israeli school. It sounds like the beginning of a joke, but it happened as part of the Martial Arts for Peace International Seminar held earlier this year for hundreds of Israeli and Palestinian karate students. The event was organized by Budo for Peace, an Israeli nonprofit that uses martial arts—budo is a Japanese term for modern martial arts—to unite youth from diverse backgrounds to foster coexistence and dialogue.

​“The goal of Budo for Peace is to bring children who are in conflict areas to learn respect, tolerance, nonviolence and to break down the barriers of ignorance and fear,” said Danny Hakim, the organization’s founder, who made aliyah from Australia in 2003. Hakim, 61, is a seventh-degree black belt and has twice won silver medals in the world karate championship.

​His goal seems to be working for karate students at a new dojo, or martial arts studio, in Jisr al-Zarqa. Located just north of Caesarea along the Mediterranean, this is one of Israel’s poorest Arab villages, known for its high crime rate.

​Since the dojo opened, said Robeen Arkia, an educational coordinator for Budo for Peace, teachers and community leaders say that violence in the local school is down. “The idea is not to fight each other, but to learn to respect each other,” said Arkia. 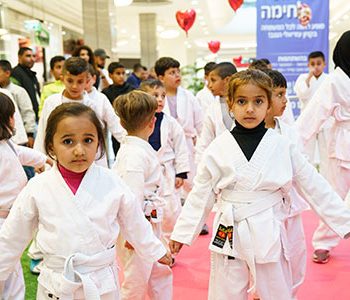 ​Among the guests at the January event was Ghazi Keyvan, an Iranian who currently lives in Greece and coaches the Greek national team.

​“I expected Israel to be very different—to see police everywhere and to be searched all the time,” Keyvan said. “Israelis are a lot like Iranians. They are European on the outside but they have warm hearts like Middle Eastern people.”

​Sensei Emad Khalil from Jordan also attended the seminar. For 10 years, he lived in Dubai, where he trained the royal family in martial arts.

​“Martial arts make people mentally and physically strong,” he said. “It’s not only fighting and kicking and jumping.”

​Budo for Peace has begun teaching Syrian refugee children in Lesbos, Greece, where Hakim has recruited local martial arts teachers to teach dozens of children. Hakim says there are plans to expand activities there in the coming months.