With My Niece in the NICU, I Longed for My Mother’s Presence

I’m stuck in traffic, running late, when my phone rings. “We have a baby girl,” my brother says. “Her name is Lily.”

My brother Dan and his wife, Molly, were determined to be surprised about the gender of their newborn. And she wasn’t due for another two weeks, so it’s a double surprise.

“Everything went O.K.? How’s Molly?” I ask the questions, but I already know the answer. Molly is in her early 30s, a fitness fanatic who lives for fresh produce. Basically, your poster child for a healthy mom-to-be.

“Molly’s fine,” he says. “They tell us it was a pretty short labor, as these things go.”

“What does Lily look like?” I’m in Washington, D.C., and my brother is in San Francisco. We’re three time zones and 3,000 miles apart.

“She’s beautiful,” he says, smitten. She has his thick black hair. She has Molly’s button nose. He pauses.

“Lily’s in the NICU right now,” he continues, his voice wavering for a moment. “She’s having a bit of trouble with her breathing.”

I’m not worried, I tell him. They are always cautious when babies are first born. It doesn’t mean anything serious.

“Yeah,” he says. “I’m a dad.” He starts to cry. My brother, seven years younger than I am, is the most easygoing guy I know. Slow to anger, quick to laugh. I know we’re both thinking of our mom, Liora, who died too young from cancer. And now we have a new little life, the start of a new story.

“I’m so happy for you guys,” I say, my voice thick with unshed tears. 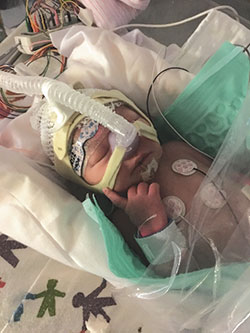 We disconnect and I’m back in my car, minding traffic. I mentally go through my calendar, trying to figure out how soon I can make it to California.

“Lily wasn’t breathing when she was born,” he says. He’s calm this time. Voice steady and matter of fact. “They had to resuscitate her.”

I gasp, my own breath suddenly gone.

He explains that this happens sometimes. Babies usually bounce right back and start breathing on their own. But it’s been a few hours and they’re not happy with her oxygen levels. They should have risen by now and they haven’t.

Brain damage? The words are ice in my veins. I had assumed she was fine, healthy and perfect. The way it’s supposed to be.

My brother fills me in on what the next few days are going to hold. There’s a golden window of opportunity to halt any damage to her brain. They’ll cool her body down and basically keep her in hibernation for three days. She’ll want to shiver, of course. It hurts to be so cold. To help with the discomfort and to stop her shivering, they’ll give her morphine. After that, they’ll slowly warm her up and hope for the best.

For the next five days, we speak every few hours as he gives me updates on my niece, a scrappy little fighter whose body is being chilled; who’s being pricked and prodded; who’s got a feeding tube, an oxygen mask and a morphine drip as her introduction to this world. I cannot escape the parallels. Lily’s first week is shockingly similar to our mom’s last one. The morphine drip. The oxygen mask.

I’m the only one from our family stateside. Our dad is in Paris. Our other brother is on a safari in Africa. “Do you want me to come?” I ask. “I can be there tomorrow.” My mom, I know, would have said, “I’m on the next flight.” It’s what she said when my son was born more than five weeks early. And all I did was count the minutes until she arrived because I knew everything then would be better. But I’m not my mom, and I’m not sure what’s the right thing to do.

He texts me heartbreaking photos of a sweet baby with round little cheeks and half-moon eyes closed in slumber. I mentally edit out the tubes and the monitoring devices, the bruises and the scabs. I text back, “She’s gorgeous.”

When our mom died two years ago, it was the hardest, saddest time of my life. She was only 63, a young 63. She was so beloved in our community that the funeral parlor didn’t have a hall large enough for all the mourners. For the first time in over 20 years, they held the funeral service in our historic synagogue, Congregation Beth Israel of Charlottesville, Va. She was so beloved that the rabbi couldn’t get through the service without choking up.

I resolve to channel my mom’s strength and optimism for Dan. “Lily turns toward Molly’s voice?” I say. “That’s fantastic. There’s a lot that goes on cognitively for her to do that. It shows she’s going to be fine.”

When he texts me a photo and Lily’s little hand is by her face and her tiny pointer finger is resting against her cheek like a teeny baby philosopher, I text back, “You’re lucky that’s the finger she’s giving you.”

I make it my mission to make him laugh, to make him feel hopeful, to help him see Lily’s story as one with limitless possibilities. I plan out my texts to Dan as I sit in traffic. I need to strike the right tone. Lighthearted and supportive. Optimistic but without false platitudes. Because sometimes, despite doing everything right, the cancer wins. Sometimes, despite doing everything right, the baby doesn’t breathe.

But at the same time, no matter how frightening the future might be, I have no doubt our mom would have kept her sense of humor. She certainly did about her cancer. She might have cried in private, but as soon as she was with us, there was no self-pity. There was no wallowing in sorrow.

The days pass slowly. I worry about Lily. I fret about Dan and Molly. And I desperately miss
my mom.

And then the MRI comes back. It’s perfect. Lily is perfect. Her brain is perfect. The safety precautions have paid off. She can go home as soon as she learns to nurse—and that little girl is hungry. She hasn’t eaten in days. She latches on like a little gourmand.

“I’m feeling all the feels,” Dan tells me over the phone. “I’m almost nauseous with relief.”

The three of them leave the hospital a week after Lily’s birth. Exhausted, elated, desperately grateful that Lily is O.K., parents for only a week but already seasoned by this trial by fire.

And I’m in D.C., fighting traffic, feeling the bittersweet sting of missing my mom and knowing that even gone, she’s the one who helped all of us get through this.

Tammar Stein is a novelist living outside Washington, D.C. Her latest novel, The Six-Day Hero, was an Association of Jewish Libraries Sydney Taylor Honor Book and a Junior Library Guild Selection.