By Hilary Danailova May 2019
Email 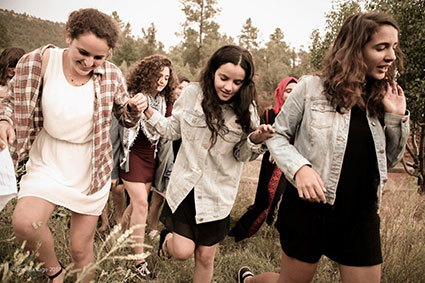 In the 16 years since Creativity for Peace was founded, the New Mexico-based organization has found it increasingly difficult to annually recruit eight young Palestinian women for the group’s central focus: peacemaking partnerships with eight Israeli Jewish counterparts, aged 15 to 21.

Yet longtime executive director Dottie Indyke believes dialogue is now more critical than ever. Even as they hesitate to engage with Israelis for fear of appearing to “normalize” relations, Palestinian participants “want the Israelis to know the pain and suffering of their lives,” Indyke said. “And they’re curious about the other side, too—what makes them tick.”

For their part, Israelis “have become much more aware that they need to do more listening,” said Indyke, whose group recruits through word of mouth and social media.

What distinguishes Creativity for Peace is its conviction that in a region dominated by powerful men, progress will, and must, come from women.

“There’s ample evidence that men’s way to resolve conflict is often to fight,” Indyke observed. “Women’s way, often, is to talk. To feel. We have a unique capacity to be bridge builders.”

With a $750,000 annual budget, Creativity for Peace launches each cohort at a three-week Santa Fe workshop that combines facilitated discussions with collaborative art projects and team-building activities. Over the following two years, the cohort meets periodically in Israel.

Graduates are having an impact across government, journalism and education. Among the 300 alumnae are Diana Fraija, a reporter for Palestinian government television in the West Bank; and Adi Goldshtein, who shared her experience in the program with several members of Congress when she was a staffer at the Israeli Embassy in Washington, D.C.

More than a few are sowing the collaborative spirit with initiatives like Sivan Kedem’s Cologne Peace Day Care Center in Jaffa, where Arab and Jewish children learn each other’s language; or the first Arabic book fair at Hebrew University, organized by Aia Khalaily.