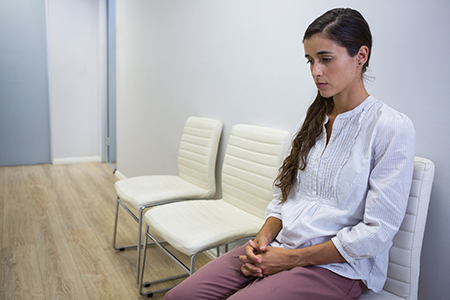 A 10-year-old girl is slammed against a glowing electric heater for rejecting her father’s sexual advances. A 13-year-old shivers in terror, knowing her family will kill her if she is caught exposing what happens at home. A university student struggles with himself to report his rape by a man twice his age. A female soldier in the Israel Defense Forces freezes when a superior initiates unwanted sex, and she remains frozen through to its end.

Sheer horror, of course, links these instances—but so, too, does something else: In each, the victims feel that they are to blame for what happened.

“Most sexual abuse victims believe it’s their fault,” said Dr. Dvora Bauman, 59, a senior obstetrician-gynecologist at the Hadassah Medical Center in Jerusalem and director of its Bat Ami Center for Victims of Sexual Abuse. “They think it happens because of something they did, which deepens their trauma. Children, especially, are confused, uncertain whether it’s part of normal life. Even adults need reminding that any sexual behavior imposed without their consent constitutes abuse.”

This climate, however, is slowly changing, led and symbolized by the #MeToo phenomenon. The millions worldwide who have used the hashtag to denounce sexual harassment and violence are, according to Dr. Bauman, helping all those who have been sexually violated to internalize that they were guiltless victims and that the abuse they suffered was criminal. “By shifting guilt from the victim to its rightful place, the shame recedes and survivors are able to talk about what happened, stand up in court, go on with their lives.”

Sexual abuse, especially when repressed, can profoundly impact physical and mental health. Post-traumatic stress disorder, depression, sleep disturbance, eating disorders and self-harm are among its fallouts—all of which are treated at Bat Ami. One unfortunate victim is a regular in Hadassah’s emergency room and a patient at Bat Ami. “She dissociates and inserts objects—nails, twigs—into her vagina,” said Dr. Bauman. “Some 60 percent of sexually abused men and women later develop psychiatric illness.”

Although sexual abuse and rape are as old as the Bible, standard care protocols for its victims in hospitals and treatment centers are still evolving. In Israel, the first protocols were enacted by Israel’s Health Ministry after a violent attack on an 11-year-old some 20 years ago. Her injuries were treated, but no pregnancy test was performed. As a result, her pregnancy went undetected until 27 weeks later. Soon afterward, the ministry drafted guidelines for rape victims that included medical and forensic examination; pregnancy and sexually transmitted disease prevention; and psychosocial care, treatment and follow-up. It also established four national centers to treat victims of sexual abuse.

Hadassah’s Bat Ami is one of those centers. Now marking its 10th anniversary, Bat Ami last year treated 175 survivors. Eighty-eight percent were female victims, the youngest under a year old and the oldest in her 80s. The overwhelming majority were girls in their early to mid-teens.

Their abusers were rarely strangers. The 19-year-old soldier had just completed a nightshift with the man who raped her. Dr. Bauman recalled the victim sobbing as she told her that she froze when he started but never said no. “He probably thought I wanted him,” the doctor was told.

“My reply was forceful,” said Dr. Bauman. “I told her: ‘He didn’t ask. You didn’t agree. There was no consent. It’s clear when someone is interested. He abused you. You are blameless.’ ”

The 10-year-old whose father held her against the heater came to Hadassah in March with a large burn on her right buttock. Emergency room staff alerted Bat Ami—and the withdrawn child and tense mother were gently led down a quiet corridor along the ER’s perimeter to a door whose discreet gray-and-white sign features the name of the center. Inside, the child and mother found four people seated around a coffee table: an ob-gyn, a nurse, a social worker and, because the child was under 14, a police social worker.

The mother and child were offered a drink and some cookies and invited to tell the group what happened. For the next three hours, recalled Nurit Seidel Levy, the social worker, the child robotically repeated: “I fell. The heater was there. I fell on it,” while her mother insisted: “My husband loves his daughter. He loves all his children. He’d never hurt them.”

“We sensed something was very wrong, so we didn’t give up until the child was ready to tell her story,” said Levy. “Eventually, she spoke: ‘He’s been at my sister for months. When he came at me, I kept saying no, till he grabbed me and pushed me on the heater and held me there.’ The mother, found to be herself sexually and physically abused by her husband, broke and confirmed every word.”

Bat Ami functions as both ER and multidisciplinary treatment center. Every day of the year, 24/7, it can call on specialized teams from among 14 ob-gyns, 14 nurses, several pediatricians and 30 social workers. Its unobtrusive three-room suite is comprised of the lounge-like interview room with a mini-refrigerator, coffee, tea and cookies; an examination room, equipped for medical and forensic assessment and documentation; and a bathroom. Its $28,500 state-of-the-art colposcope, a gift from Hadassah-Australia, collects photo and video documentation for police and prosecutors.

Bat Ami keeps its profile low to ensure the privacy and safety of the victims. “I know her uncle’s interfering with her,” a scared Israeli Arab mother recently told a Bat Ami team. Her terrified 13-year-old daughter, shaking so hard she could scarcely speak, blurted out: “Today, I’ll tell you what he does. Tomorrow, he’ll kill me.” Representatives from Bat Ami took them both to a shelter.

Dr. Bauman has headed Bat Ami since 2015, succeeding its founding director, Dr. Sagit Arbel-Alon. Warm and approachable, Dr. Bauman was born in St. Petersburg in the former Soviet Union and moved with her family to Israel in 1970. Her expertise comes from her specialization—pediatric and adolescent gynecology.

She brings to Bat Ami two primary emphases, she says. The first is raising awareness of sexual abuse throughout the country. Bat Ami is involved in a number of programs in Israel, including one with the Jerusalem-based Eden Center, a mikvah facility that trains mikvah attendants to identify medical problems and possible abuse.

Dr. Bauman teaches both mandatory and elective courses at the Hadassah-Hebrew University School of Medicine and lectures widely to medical and legal professionals and the general Israeli public. “When I quote Association of Rape Crisis Centers figures that one in three women is sexually abused, the reaction is usually: ‘Women exaggerate! It can’t be so high!’ ” she said. “But #MeToo has changed that. One senior Hadassah physician recently remarked: ‘I never believed that figure, but I realize it’s true.’ ”

The male physician’s comment highlights Dr. Bauman’s second emphasis: involving men. “Because 88 percent of victims in Israel are female”—in the United States, 91 percent of victims are female, according to the National Sexual Violence Resource Center—“the struggle against objectification and abuse of women has largely been a feminist issue, but the men should be there, too,” she said. “Over 95 percent of abusers are men. Even among male victims, 98 percent of perpetrators are men. The responsibility to combat abuse is equally that of men and women, from public campaigning to reining in friends who harass women.”

If unwanted advances are recognized as abusive rather than macho or manly, victims—especially male victims—are more likely to report sexual mistreatment, she said. “We know that one in six men is abused—half the number of women, but still very high—yet only 12 percent of Bat Ami’s patients are men. In a country like Israel, where every teenage boy dreams of serving in an elite IDF unit, the shame of abuse is paralyzing.”

Dr. Bauman recalled a male university student who was violently raped. It took him two days to seek medical help from Hadassah. He felt utterly humiliated—from falling for his abuser’s flattery to its brutal aftermath. “We collected forensic evidence from his body,” Dr. Bauman said, “and told him he had 90 days to report the crime.” (Lobbying from grassroots advocacy groups has recently extended the reporting time to up to five years.)

The decision to bring charges belongs to the victims, part of Bat Ami’s focus on helping them regain control over their bodies and their lives. This young man’s first response was not to press charges. “I just want to forget it ever happened,” Dr. Bauman recalled him telling her. However, two days before the reporting window closed, he called her, asking whether Hadassah still had his rape kit. “He told me that he’d done some thinking” and decided to go to the police, she said.

Dr. Bauman firmly believes that men should be on Bat Ami’s staff—and they are. The “very special and very dedicated” among them can jumpstart recovery, she said, as a way to prevent the development of phobias and restore trust in men. Dr. David Mankuta, who heads Hadassah’s labor and delivery unit at Ein Kerem, is one.

“Bat Ami’s patients sometimes flinch when they see me,” said the ob-gyn, who is originally from Long Island in New York. “A violently raped 15-year-old told me, ‘Go away! I don’t want a man near me!’ I replied that we’d call a woman doctor, but could we chat first? She agreed. As we talked, she saw me not as a man but as someone who cared about what had happened to her and allowed me to treat her.”

Because victims are often too ashamed or frightened to speak out, Dr. Bauman thinks that all doctors should ask patients whether they have ever suffered sexual violence as a standard part of taking their medical history, recorded in the same way as hypertension and drug allergies. “For some, this opening to recount buried horror opens floodgates,” she said. “We physicians must then ask: Have you ever told anyone? Would you like to talk about it now?”

There is no emotional statute of limitations on the harm wrought by sexual predators. Increasingly, however, with today’s changing climate and the help of Bat Ami and other crisis centers in Israel, their victims are speaking out and accepting the fact that they are not
to blame.