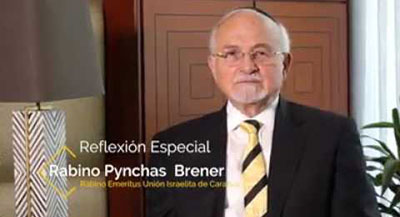 RIO DE JANEIRO (JTA) — Venezuela’s opposition leader appointed a diplomatic envoy to Israel, which has joined 50 other nations in recognizing him as the country’s legitimate president.

Juan Guaido, the head of the Venezuelan Congress, named Rabbi Pynchas Brener as a diplomat in Jerusalem, reported the Spanish-language Aurora news website.

Brener, who is rabbi emeritus of the Union Israelita de Caracas synagogue and a former chief Ashkenazi rabbi of Venezuela, was approved for the position in a unanimous vote by Congress on Tuesday. Although he will serve in a de facto diplomatic role, his designation to the Israeli government will be “diplomatic envoy.”

The appointment is part of the crusade that the Venezuelan Congress undertook against Nicolas Maduro last January, after he won what Guaido, the United States, the European Union and other world leaders maintain was a fraudulent election.

Guaido has already appointed diplomatic envoys to several European nations including the United Kingdom, Germany and France as well as ambassadors to many countries in the Americas, including the United States, Canada and Brazil. In July, Morocco became the first African nation to welcome a “special envoy” of the Venezuelan opposition leader.

Israeli Prime Minister Benjamin Netanyahu recognized the new leadership in Venezuela in January. Guaido thanked Netanyahu, comparing the political upheaval in the South American nation with the end of the Holocaust.

Venezuela is home to a fast-shrinking 6,000-member Jewish community. Most Jews have fled to the U.S., Israel or elsewhere.