Dubai and Abu Dhabi for the Curious Jewish Traveler

At a recent shabbat dinner, my friend Gloria asked me: “Should I visit Dubai? A girlfriend has invited me to accompany her on a trip there. But is it dangerous for Jews?” As someone who has visited the United Arab Emirates, my unequivocal answer was, “Go!”

The UAE—located between Oman and Saudi Arabia and similar in size to the state of Maine—is a coastal confederation of seven emirates, or city-states: Dubai, Abu Dhabi, Sharjah, Umm al-Qaiwain, Fujairah, Ajman and Ras al-Khaimah. Abu Dhabi serves as its capital while Dubai is the major metropolis. Over the last 20-plus years, the two emirates have become increasingly larger-than-life tourist meccas, all the while wrestling with issues of modernity, Muslim religious standards and tolerance. In the same cities that amaze foreigners with their behemoth skyscrapers towering over old-world desert attractions and colorful bazaars, it is illegal to hold hands with your partner, and exposing bare upper arms is frowned upon.

Despite the restrictions, visitors to the UAE can experience a wealth of cultural, sports-world and historical pursuits. The renowned Sharjah International Book Fair is a modern-day, annual celebration of culture. Horseracing’s Dubai World Cup is an elite competition that, at more than $12 million, claims the highest purse in the sport. For exotic, ancient authenticity, explore the pungent Abu Dhabi camel market and the Al Ain Abu Dhabi inland oasis garden, with its Bronze Age archaeological remains. Indeed, the UAE invests in grandiose style, determined to become a hub of global commerce as well as tourism—even, beginning later this year, tourism from Israel.

While the UAE and Israel maintain no official diplomatic ties, unofficially, relations between the two nations have warmed due to their mutual concern over Iranian influence in the region. In an unprecedented move, in October of this year, Dubai is set to welcome travelers from Israel for its Expo 2020 world fair—which will include an Israeli pavilion—with plans to extend special entry permits to Israeli visitors after the show. In this new spirit of cooperation, Dubai and Abu Dhabi have made it onto the tourism map for Diaspora Jews as well—and for prominent Jewish missions, like one led by the Conference of Presidents of Major American Jewish Organizations in 2018.

While admittance for vacationing Israelis is new, historically, the UAE has quietly welcomed Israeli and Jewish experts in agriculture, agronomy and water for decades. My father, petroleum sedimentologist Gerald Friedman—a German Jewish Holocaust survivor and mentor to a generation of Israeli geologists—was invited to study the oil-producing sabkha salt fields of Abu Dhabi as early as 1969.

In the world of professional sports, the UAE likewise has shown increasing openness toward Israel. On October 28, 2018, Israeli Sagi Muki won gold at the Abu Dhabi Grand Slam, an international judo competition. After his win, UAE officials for the first time allowed the raising of the Jewish state’s flag and for “Hatikvah” to be played—moves that had been banned as recently as the previous year. A similar scene played out in Abu Dhabi on November 16, 2019, when Alon Leviev won gold in the junior category at the Jiu-Jitsu World Championship in Abu Dhabi.

Until recently, Jewish life in Dubai and Abu Dhabi existed on a small scale and exclusively under the radar. Expatriate Jews involved in finance, law, energy and the diamond trade as well as businessmen who found themselves in the emirates during holidays or on Shabbat celebrated in private, or not at all. However, in 2018, news of Dubai’s secret Villa synagogue, with approximately 150 members, surfaced. Located in an inconspicuous, quiet neighborhood whose address can only be obtained by word of mouth, the building features a prayer room, kosher kitchen and accommodations for observant Jews visiting the city. The congregation’s Torah, donated by businessman Eli Epstein of New York, is dedicated to his good friend Mohamed Alabbar, the Dubai-based chairman of one of the world’s largest real estate development companies and builder of the Burj Khalifa in Dubai, the tallest tower in the world.

And now, the UAE has its first chief rabbi. In May of last year, Rabbi Yehuda Sarna, executive director of New York University’s Bronfman Center as well as its Hillel, assumed the voluntary role, which will bring him to Dubai eight times a year. Sarna, an Orthodox rabbi, is already the chaplain responsible for Jewish life at NYU’s portal campus in Abu Dhabi. “I have observed, over the past few years, that a Jewish community has begun to form,” Sarna said of his time spent in Dubai. He went on to describe the establishment of the first new Jewish community in the modern Arab world as “historic.”

Emirati sheikhs led by President Khalifa bin Zayed al-Nahyan of Abu Dhabi and Vice President Mohammed bin Rashid al-Maktoum of Dubai have used the profits from their oil resources to catapult and diversify their principalities into modern economic successes. From the 1960s until today, as the ruling sheiks expanded the Dubai port facilities, constructed one of the world’s busiest international airports and built up a mega-infrastructure, they imported foreign construction workers and tradesmen from India, Pakistan, Bangladesh and beyond. These expats, who today build and maintain the “highest,” the “biggest” and the “glitziest” projects, number approximately 7.8 million, out of a total population of 9.7 million people in all seven emirates.

Such workers recently completed the world’s tallest hotel, the 1,168-foot-high Gevora Hotel, in Dubai’s financial district. If you find heights exhilarating, order a mocktail—in accordance with Muslim law, no alcohol is served here—at the 75th-floor rooftop lounge and peer over to the iconic Dubai J.W. Marriott Hotel, shorter than the Gevora by three feet. The Marriott, completed six years ago, with 60,000 panes of glass and 102,000 steps, eschews the ban on alcohol, sporting two large bars.

A little over an hour south of Dubai lies Abu Dhabi. Spread across the mainland as well as a series of islands, it has been beset by urban sprawl for decades.

Inaugurated in 2017, the Louvre Abu Dhabi art and civilization museum—part of a 30-year, $525-million deal that UAE leaders struck with the French government—focuses on bridging the gap between Eastern and Western art, notably by showcasing Christian, Buddhist and Jewish art and artifacts alongside Islamic ones. The sprawling 86,000-square feet of gallery space, in the Saadiyat Island Cultural District, make it the largest art museum on the Arabian Peninsula.

Among Abu Dhabi’s major features is the Sheikh Zayed Mosque, one of the world’s most spectacular sites of worship and the only Emirati mosque open to non-Muslims. Although men and women can tour the mosque together, the guards strictly enforce that a woman’s body be draped from head to shoeless feet in opaque garments.

In the early 2000s, Western-educated Emirati leaders approached NYU to establish a branch of the school in Abu Dhabi, to be primarily funded by the UAE. Both governmental officials and NYU leaders agreed that the rights of minorities, Jews, Israelis, gays and other groups often marginalized in the Muslim world would be protected, and that these students would be welcome on campus.

Indeed, since its 2010 opening, several prominent Jews have contributed to the operation of NYU Abu Dhabi: Israeli Ron Robin, former vice dean of academic affairs at the NYU Steinhardt School of Education and current president of Haifa University, planned the new campus and recruited its faculty. The late Hillary Ballon, NYU professor of architecture and urban design, was deputy vice chancellor of the school. And Alfred Bloom, former president of Swarthmore College, has served as vice chancellor since the university’s inception.

For the last eight years, Sarna, UAE chief rabbi and NYU chaplain, has frequented the Abu Dhabi campus to maintain ties with its small number of Jewish students and faculty. According to Sarna, some identify outwardly as Jewish, while others do not. Sarna himself walks around the UAE campus wearing a kippah, tzizit hanging out, just as he would at NYU’s Greenwich Village campus in Manhattan. And since NYU programming is open to everyone, students and faculty of all faiths come to support and join in Jewish celebrations and events, including the popular Passover seders.

In 2017, NYU Abu Dhabi sought to publicize this newfound openness by hosting a conference on religious tolerance. It was a surprise to the university, therefore, when the Sunni Muslim-majority Emirati government denied visas to two NYU professors. The faculty members, both American citizens, are Shiite Muslims—one of Lebanese heritage and the other Iranian. NYU was unsuccessful in appealing the ban.

With alliances shifting in the Arab world and burgeoning Emirati tolerance of Jews and Israel, Dubai and Abu Dhabi may become increasingly popular destinations for curious Jewish tourists seeking the flashy glitz and old-world desert culture of a once forbidden, exotic land.

Both Visitdubai.com and Visitabudhabi.com offer helpful tourist information and itineraries. Because of dress codes pertaining to modesty, especially for women, it is wise to research appropriate attire before you pack: Consult the U.S. State Department Bureau of Consular Affairs for up-to-date guidelines. 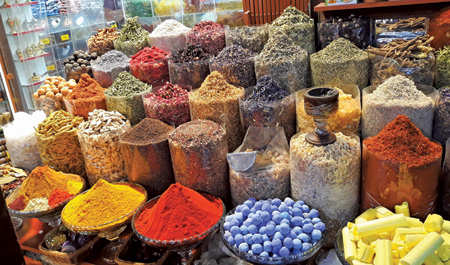 The ticket to the top of Burj Khalifa, the tallest building in the world, tells visitors that the tower “is so tall that you can watch the sunset from the base of the building” and take the “elevator right to the top, and watch the sunset all over again.”

Take a dhow boat cruise on the Dubai Creek for a pleasant, leisurely afternoon outing. Or, for something more fast-paced, hit the slopes at the over-the-top Mall of the Emirates for the only indoor skiing in the Middle East.

For a dizzying array of intricate and oftentimes jaw-dropping jewelry, stroll through the mesmerizing Old Gold market, in an older, less developed neighborhood of Dubai. Also nearby and worth a visit is the aromatic spice souk.

Outside the city, adventure-seekers take to the desert for a range of outdoor activities—red dune safari rides, sandboarding, camel rides and falconry displays.

The Louvre Abu Dhabi is a must-see for art enthusiasts. Opening in February is the blockbuster exhibition “Rembrandt, Vermeer & the Dutch Golden Age: Masterpieces from The Leiden Collection and the Musée du Louvre.”

The Sheikh Zayed Grand Mosque is the biggest in the country, and one of the 10 largest Muslim houses of worship in the world. Tourists of all faiths can marvel at the exquisite hand-knotted carpets that line the prayer hall as well as the seemingly endless use of white Macedonian marble throughout. Dress codes are strictly enforced, and all visitors must take off their shoes in accordance with Muslim tradition.

Judith Friedman Rosen is a historian and Jewish communal leader.