Growing up in a small town in Utah, Sarah Arnoff Yeoman’s Jewish upbringing was defined not by synagogue or ritual, but by the matzah brei her father cooked during Passover and an aunt’s Hanukkah latke parties.

“What I felt always connected us to our heritage was the food,” reflected Yeoman, a professional photographer based in Portland, Ore., and Salt Lake City.

Now Yeoman, 30, is giving families a way to define and preserve their unique food memories, which are often among the tightest bonds in American Jewish clans as well as other ethnic groups. Yeoman’s burgeoning business, The Family Cookbook, gets multiple generations in the kitchen for an all-hands-on-the counter photo shoot that forms the basis of a family’s recipe book.

Custom packages start at $2,499 and include e-cookbooks, recipe digitization and hardcover mini-cookbooks. While there are websites that allow users to upload materials and customize family recipes collections, Yeoman, whose clients span the country, may be the first to personalize intergenerational recipes with luminous, high-quality portraits.

Yeoman’s photography was the initial draw for Deena Prichep, a 43-year-old Portland journalist who was among the first clients last summer.

“We realized we only had a handful of photos that weren’t taken with our phones,” said Prichep, who has a 3-year-old daughter and writes about Jewish food. “To really capture what our family looks and feels like, capturing our life in the kitchen felt perfect.” 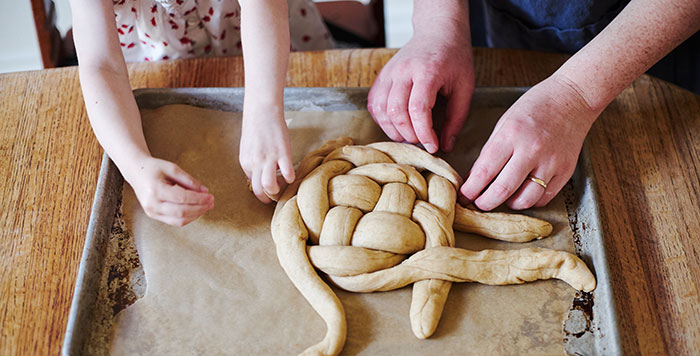 The Family Cookbook is a natural synthesis of Yeoman’s interests. Photography has been a passion since childhood, when she inherited cameras she still uses from her grandfather, a professional portraitist. Yeoman’s early jobs as a linguist and documentary photographer in Native American communities indigenous to the West, and developing recipes for a Utah culinary magazine, gave her an appreciation of how food expresses identity and heritage.

“Traditional foods are not just important; they are necessary. Yet many recipes are in danger of disintegrating in a kitchen drawer,” observed Yeoman. Challah, the most popular food among her Jewish clients, “is fun, because everyone makes it slightly different.” Matzah brei and cholent also frequently appear at family reunions planned around photo shoots, she said.

“What motivates a lot of families is that loved ones are getting older,” Yeoman added, “and might not be able to share that knowledge for much longer.”