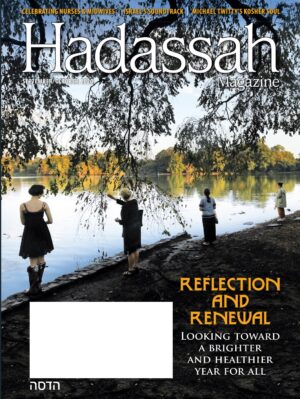 Editor’s Note: We would like to acknowledge the significant response we received to the opinion pieces on the presidential candidates in the September/October 2020 issue. Clearly, people were passionate about this election. Their inclusion was in keeping with our efforts every four years to present balanced coverage of the presidential election from a Jewish perspective—and this format was the same as the one presented in 2016. Hadassah Magazine is one of the few places, Jewish and non-Jewish, where differing opinions can be expressed and heard. Hadassah’s pluralistic, nonpartisan nature is part of what distinguishes us and gives us strength. Because of the timing of our November/December issue, which you have received after the election, we have printed just a few letters to the editor on the subject here.

No Politics, Please! As a lifetime member of Hadassah, I was disappointed to see opinion pages about Joe Biden and Donald Trump in the September/October issue. Since Hadassah is nonpartisan, I believe that a more unbiased approach would have been to avoid publishing partisan editorials. While the purported rationale was to educate, these articles simply echo information and viewpoints widely circulating in other media. In reading Hadassah Magazine, I would prefer a respite from presidential politicking.

We read with interest the two opinion pieces in support of each United States presidential candidate in the September/October issue. Learning about both sides and perspectives on any issue or candidate is crucial before anyone decides what or whom to support. But we were disappointed to see that neither author addressed the candidates’ approaches and plans about the future of health care coverage for Americans. As 40-plus-year health care professionals, now retired, we spent the majority of our careers witnessing disparities in health care and the resulting devastating effects on individuals and families. People who read this magazine support Hadassah, one of the leading and most respected health care organizations in the world. If the magazine wanted to educate the readership about the differences between the two candidates, then the opinion writers should have included the candidates’ positions on health care. Not including those positions was a glaring omission and did not give the readership a full perspective of one of the most crucial issues we are facing here in America.

Four Generations of Roots in Savannah

We read with great interest the travel article on Savannah in the September/October issue. While we were both born in Charleston, S.C., our mother was born in Savannah, the seventh of 12 children. Of particular note was the reference in the article to Bonaventure Cemetery’s Jewish section, which opened in 1909. Our grandparents arrived in Savannah in the late 1880s as small children, along with their parents, of course. The first of these great-grandparents died in 1914 and was buried in that first Jewish section at Bonaventure, near the chapel. Eventually, all four of my mother’s great-grandparents were buried very close to each other in this section, along the back row. A few rows in front of them, our grandparents are buried together. And now, some of their children and spouses (our aunts and uncles) are buried with them, as are some of our first cousins. These graves at Bonaventure serve as a true genealogical family tree. Four generations are buried together, with the great-grandparents at the top and each successive generation in rows below them. When we visit Bonaventure Cemetery, it is with great pride that we share the history of our maternal roots in America with our children and grandchildren.

There’s More to the Story in Vilnius, Lithuania

In the short item, “Elaborate Web Tour Reveals Splendor of Jewish Vilna,” in the September/October issue, Go Vilnius tourism Director Inga Romanovskiene remarks how her office is applying the newest technology to preserve the rich layers of Jewish history in Vilnius. She omits that at the same time, the Lithuanian government plans to ignore protests and desecrate the Old Vilna Jewish Cemetery by erecting a convention center in its heart, although there are other suitable sites in the city for the convention center. Romanovskiene omits that Lithuania promotes the double genocide theory in its Genocide Museum, where it equates Lithuanian suffering under the Soviets with the genocide of the Jews under the Nazis. She omits that authorities hope to make 2021 a year dedicated to Juozas Luksa, who was active in the Lithuanian Activist Front, a violent pro-Nazi, anti-Semitic organization, and whom multiple witnesses have placed at the barbaric June 1941 Lietukis Garage Massacre in Kaunas.This is not a critique of Lithuania’s role in World War II history. It is a critique of today’s decisions to cause so much pain by desecrating the Old Vilna Jewish Cemetery and by planning to dedicate 2021 to a Nazi collaborator while trying to attract naive tourists with gimmicks.

A Frequent Flier of the ‘Jewish Traveler’

I have been a member of Hadassah for almost 60 years, after my grandmother made me a life member when I was 18. She, my mom and I made up three generations of life members. About 30 years ago, when my husband and I started traveling, I began saving the “Jewish Traveler” articles in each issue of Hadassah Magazine—and I never stopped. I organized them alphabetically, so when we were going somewhere, I would check to see if I had an article for that city or country. Most of the time, I did! It is now a huge collection, a stack over three-inches high. Although some information in the articles may be dated, the historical information is timeless and priceless. Now, it is time to part with my collection, and I am thrilled to find a home for it in the library of my synagogue, Temple Beth Shalom in Arnold, Md. The last thing I wanted to do is throw the articles away! Thank you, Hadassah Magazine, for giving me so much enjoyment with these articles, whether I traveled to the area I read about or not.