The English translation of the word Haggadah is “the telling.” What we tell on Passover and how we tell it each year reflect not only our ancient heritage but also reveal our current hopes, fears and preoccupations. It is hardly surprising, therefore, that recent Passover books focus on the trials of the past year, with essayists bringing new insight into the discussions of both biblical and modern plagues and Haggadot acknowledging the need to include remote participants in the seder.

Complementing the traditional text with verses from a diverse group of leading poets, including Yehudah Amichai and Emma Lazarus, would have been enough to make the Reform rabbinic association’s new Haggadah a worthy addition to seder night. Adding discussions on the historical background of seder rituals, commentary with contemporary social concerns and abstract artwork from renowned artist Tobi Kahn makes Mishkan HaSeder an inviting and modern addition to the Passover canon.

Seder in Motion: A Haggadah to Move Body and Soul
By Ron Isaacs and Leora Isaacs
Illustrated by Martin Wickstrom (Behrman House)

Comments placed throughout this abbreviated but largely traditional and family-friendly Haggadah encourage both mindfulness and movement when taking part in Passover rituals, such as adding hand motions to the recitation of the Four Questions or following the Sephardic tradition of using scallions as whips when acting out the Israelites’ suffering in Egypt. Equally important for this year’s Passover are the suggestions and instructions for including virtual participants in the seder.

The Telling: How Judaism’s Essential Book Reveals the Meaning of Life

Business executive and philanthropist Mark Gerson, host of the podcast The Rabbi’s Husband, brings us a guidebook to what he calls “The Greatest Hits of Jewish Thought,” i.e., the Haggadah, a text he believes is not just for holiday use but should be examined and learned year-round. He weaves in Jewish commentaries, social science and philosophy, taking readers through the history and background of Pesach and the seder. He also gives his thoughts on holiday preparations and delves into key sections of the Haggadah itself. Breezy and accessible yet erudite, Gerson asks readers to contemplate ideas such as why the seder begins with the singing of what is essentially the table of contents (kadesh, urchatz…) and how the reaction of Pharaoh to the Jews leaving Egypt reveals the difficulties of getting anyone, including leaders and political figures, to change their opinions. 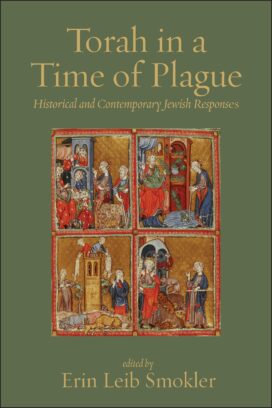 Scholars, poets and writers use Jewish canonical texts, including the biblical plagues of Exodus and the flood of Genesis, as jumping-off points to discuss the current pandemic from a variety of perspectives, from personal stories to theological discussions on the impact of this unique time on Jewish law. Among the noteworthy contributors are Sara Labaton, director of teaching and learning at the Shalom Hartman Institute, who discusses individual versus communal mourning in a time of crisis; and writer Ilana Kurshan, who muses about reading to her children during the pandemic from sections of the Torah that describe the Jewish wanderings through the desert as well as the Ramona Quimby children’s series by Beverly Cleary.

Leah Finkelshteyn is the senior editor of Hadassah Magazine. 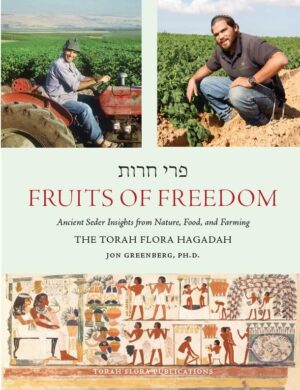 Combining Jewish scholarship, agronomy and history, Fruits of Freedom brings fresh insights to the familiar rituals of the seder.

Jon Greenberg is an ethnobotanist (the study of the use of plants in different cultures) and founder of Torah Flora who uses his knowledge to bring together agronomy and Judaic thought and tradition. His Haggadah contains the traditional text, in Hebrew (or Aramaic) with English translations, enhanced throughout by his comments and asides about horticulture, viticulture (the study of grape cultivation), food history and science. For example, Greenberg discusses the dipping of karpas through the lens of ancient gastronomic practices, namely the lack of utensils at a typical Roman or Greek meal, and explores similes in the Haggadah text that liken the Jewish people to reeds, and how this represents their resilience, rather than assumed fragility. He also describes the seemingly endless variations of haroset throughout the Jewish Diaspora and how the brick-and-mortar mix relates to different understandings of the Exodus.

While the contents of Fruits of Freedom are fresh and exciting, its visuals are not as captivating. The photographs and icons sprinkled throughout accurately illustrate historical or agronomical points but are less successful in creating artistic appeal.

Nonetheless, Greenberg makes readers care about even the most mundane elements of seder rituals, such as the reason we lean to the left around the table, placing them within their greater historical context.

Weaving together an accessible narrative that merges traditional Jewish commentaries with the agricultural customs and norms of the ancient Near East, Fruits of Freedom is a rich new source of discussion for seder night and beyond.

Sarah Austin is a sophomore at Cornell University majoring in hotel management and minoring in viticulture and enology. In between her studies, she writes a weekly column, “A Moosewood Mess,” in The Cornell Daily Sun.