By Jennifer Lovy May 2021
Email

It was the middle of Passover and Liba Yoffe, a 35-year-old mother of four, found herself in Tacoma, Wash., competing as the first Orthodox Jewish woman on the popular television show American Ninja Warrior.

Yoffe stood on the set, built inside the Tacoma Dome—a stadium designed to seat 23,000—and, she says, experienced a range of emotions as she contemplated the difficulty of the obstacle courses. Mostly, she says, she was nervous, but there was also a strong feeling of disbelief since she had only been seriously training as a ninja warrior athlete since last October, and this was her very first competition. She had never participated in one before because all the local and regional events conflicted with Shabbat.

So, during Passover, she found herself at her first-ever ninja warrior competition—on a national stage with athletes with years of competition experience behind them.

“I couldn’t even visualize what a competition was like because I’ve never had that experience,” says Yoffe, who, at 4 feet 11 inches tall, decided to dream big when she auditioned for the show—which she did after confirming with event organizers that no sessions would be recorded on Friday night or Saturday.

In her two-and-a-half-minute audition video, Yoffe is introduced by her eldest daughter, Tehilla, who at age 2 lost all her hair due to alopecia. Now that her daughter is a teenager, Yoffe says in the recording that it is crucial for her, as a mother and as an athlete, to show women and young girls to be strong and to fight for what they believe in.

In the message she also reveals to the prospective judges how her dreams had been crushed several years earlier when training to compete as a powerlifter. She had been optimistic about her chances of winning an elite competition she had planned to enter, since she had already broken the lifting records from the previous year’s tournament.

There was, however, one insurmountable obstacle. Participants had to wear a singlet—form-fitting athletic attire that allows judges to assess a lifter’s movements. As an Orthodox woman who conforms to modest dress, including wearing a sheitel, Yoffe asked to compete in her standard workout attire, consisting of a long-sleeve shirt, long skirt and leggings. She was told there would be no exceptions, even for religious reasons.

“That’s why I’m here, applying to Ninja Warrior,” she says on the audition video, as the song Brave by Sara Bareilles plays in the background. “I believe that I can be that one that can show women and girls of the world that it is possible to maintain your faith and compete in athletics and thrive and be a strong, powerful woman inside and out.”

Yoffe, who lives in Phoenix, told Hadassah Magazine that she has “an extreme inner drive to want to compete and be really good at something.” Indeed, it was only shortly after being forced to abandon her goal of lifting competitively that she came across the sport of ninja warrior and started training at a dedicated ninja gym in nearby Tempe, Ariz.

But it wasn’t only toward a new sport that Yoffe turned her drive and determination.

“Mindset coaching is also a big part of what we do,” says Yoffe. “You can’t have lasting change without digging deep into shifting your habits and personal triggers. This is not a diet or a one-size-fits-all program. We start on the inside because that’s where true transformation begins.”

Each client receives strength training and cardio exercises designed to meet her goals. The program also includes nutritional coaching, i.e., focusing on changing habits based on understanding what foods are best for the client instead of food restrictions.

Yoffe remembers being active as a young girl. Whether hanging from trees at the age of 9 or jogging as a teenager, she always loved the feeling of pushing her body. She especially enjoyed lifting weights as a teen but stopped for many years because, she says, “as a frum girl, it wasn’t cool to be strong.

“A few years ago, I realized I shouldn’t be held back by that and started really lifting,” she adds. “It was the most freeing feeling, and I realized how strong I was and how it helps emotionally and mentally when you feel physically strong. Strong is a word we as women should be admiring.”

So, how did a female athlete with no experience in ninja competitions stand out among thousands of applicants vying for a spot on season 13 of American Ninja Warrior, set to premiere on May 31 on NBC?

Producers reportedly seek to cast participants, like Yoffe, with an unusual story. This, she believes, is why, as an Orthodox woman, she was asked to be among the hundreds of athletes invited to the televised competition, where once a ninja falls from the course, he or she is out.

Yoffe isn’t sure if her performance will appear on television; approximately 30 percent of all participants see their competitions aired. But she guesses that because of the uniqueness of her story, there is a good chance viewers will see her. 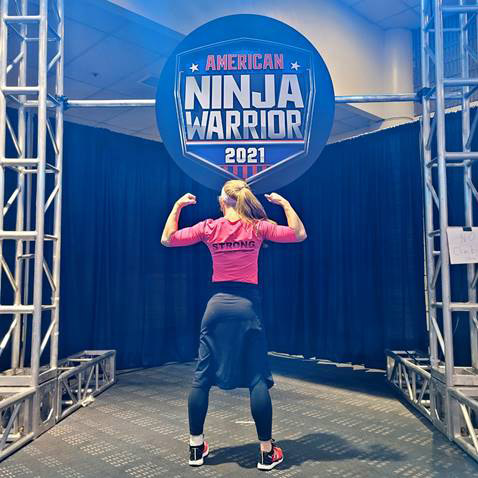 During competitions, ninja warriors race through an obstacle course that is mostly 12 to 14 feet off the ground. The idea is to use whatever is hanging to get yourself from the starting position to the finish line without falling. This is accomplished by using bars, balls, rings and equipment you have to jump to or fly from, according to Yoffe’s coach Lee Cates of Hitsquad Ninja Gym in Tempe. A good course will test an athlete’s courage, strength, balance, agility and speed, Cates adds.

“As a beginning ninja, Liba came out with skills I wouldn’t expect, and she learns things faster than most people do,” says Cates, a contestant on two previous seasons of American Ninja Warrior. “She’s right at the cusp of making that transition into one of the elite athletes of the sport. Physically, she’s one of the strongest female athletes, with a natural ability that I’ve rarely ever seen.”

Mushkie Aber, a certified personal trainer in Cleveland, is one of four Spirit Fit Life coaches. She first met Yoffe after discovering her on Instagram (@liba.spiritfitlife), where she follows several powerlifters. Aber describes her boss as someone who is highly focused and doesn’t give up on her goals.

“She’s small but mighty, and she loves a good challenge,” says Aber. “She’s also the kind of person who wants to face her fears. That’s the way she lives her life.”

Indeed, Yoffe claims that competing on American Ninja Warrior is the bravest thing she’s ever done and plans to audition again next season.

“It was nerve-racking to get up there on such a big platform, but my mission for going was accomplished,” she says. “I feel like this is just the beginning of my journey. I’ve gotten so much better than when I first started.”

“This time next year,” she says, “it’s going to be a whole different story.”

Jennifer Lovy lives in Michigan and writes about culture, parenting and all things Jewish. Her work appears in a variety of local and national publications.