Israel Ranks Near the Top in Live Organ Donations

The kidney that is cleansing the blood of Tomer Tarfa Darja and controlling his water balance, vitamins, hormones, glucose, amino acids and more, feels like his own. About three years ago, this 5-ounce, reddish-brown, fist-sized organ was performing the same master chemist job in the body of Esti Lerer, then 28, a counselor for at-risk youth and a Hasidic mother of three children under eight.

“What do you say to someone who saves your life?” asked Darja, 26, who came to Israel from Ethiopia as a toddler with his widowed mother and now lives in Jerusalem. “No words are enough.”

Six years ago, he was in a preparatory school for the army, hoping to enlist in an elite Israel Defense Forces unit, when an upset stomach took him to a doctor. He was diagnosed with a genetic kidney disease, and he deteriorated rapidly. By 2018, Darja needed dialysis three times a week.

That was the year that Lerer, who also lives in Jerusalem but grew up in a large family in Ofakim in the Negev, won a long, hard-fought battle to become a living, or altruistic, kidney donor. “It was something I’d decided when I was 16, when my best friend’s father died because there was no kidney for him,” she said. She had even told her future husband, Hanan, on their first date that she was going to register to become an organ donor at age 23, the youngest it is legally permissible to become an organ donor in Israel.

Israel’s doctors and screening boards prefer that female donors are past childbearing age. “But Esti was unstoppable,” recalled Hadassah nurse Neta Malka, coordinator of live kidney donations and transplants at the Hadassah Medical Organization in Jerusalem. “And Darja was her perfect medical match.”

“It’s rare to have so young a donor, and particularly fortunate for such a young recipient,” said Dr. Abed Khalaileh, director of HMO’s solid organ transplantation unit, located on the Ein Kerem campus, who performed the surgeries on both Darja and Lerer.

One of seven sons born to a Palestinian Israeli family in Jerusalem, Dr. Khalaileh typically performs two scheduled liver or kidney transplants each week as well as an emergency transplant or two. “It’s a journey,” he said of his decision to become a transplantation specialist. “Just as anyone can learn to draw but only a handful become artists, transplantation needs not only technical competence but imagination, 3-D vision and something inborn. In that sense, it chose me more than me choosing it.”

Lerer is among approximately 250 Israelis who choose to donate their kidneys each year, quadruple the number a decade ago, according to Israel’s National Transplant Center. Established by the Health Ministry in 1994, the center manages organ donation and transplantation in Israel, coordinating with hospitals countrywide.

With 90 to 95 percent of the country’s kidney transplant recipients surviving their first year, Israel has one of the world’s highest success rates.

Organ donation at HMO begins with transplant coordinators. Like every other transplantation center in Israel, the medical center has two coordinators, one to recruit organs from deceased, also known as cadaveric, donors, and the other to facilitate live donations—tasks that the Health Ministry requires to be separate because of the very different circumstances under which the organ is obtained. Hadassah Ein Kerem nurse Kyrill Grozovsky, who emigrated from Moscow 30 years ago, handles the former, guiding and supporting the families of brain-dead patients through the difficult decision-making process.

“We have around 50 potential donors in Hadassah each year,” he said. “I take a deep breath, then go meet the family. I tell them of the options and try to understand who they are. It’s usually a long and emotional process, driven by the incentive of saving lives. And it often brings great comfort to the donor family.”

He recalls discussing donation with the distraught wife and two children of a 42-year-old man suddenly felled by a brain hemorrhage. “The family was secular, Jewish and couldn’t decide what to do,” he said. “I asked the wife about her husband. ‘He was friendly,’ she said. ‘Everyone loved him. He was always ready to help.’ And I said: ‘Then let him help them in death as in life.’ And she did.”

Grozovsky also recalls his interaction with a young Muslim couple mourning their 3-year-old daughter, who died after being hit by a car. “In Muslim society, it’s the extended family, particularly the older men, who decide,” he said. “I spoke as much with the grandfather and imam as with the child’s parents. The imam’s approval tipped the balance in favor of donation.”

Over 60 percent of families facing this decision choose to donate, up from 40 percent two decades ago. The rise in numbers is due to several factors, including an ongoing public-awareness campaign around the National Transplant Center’s ADI organ-donor registration cards—the millionth ADI card was signed last April.

Numbers have been further boosted by Israel’s 2008 Brain-Respiratory Death Act. It determines death by neurologic criteria rather than cessation of heartbeat—when organs begin to deteriorate and therefore are less viable for transplant. The newer criteria are accepted by many Jewish and Muslim religious authorities
in Israel.

The numbers, however, still do not meet the need. “Donation is up from when I began this job 19 years ago, but it’s not enough,” said Grozovsky. “Donating organs should be as much a social norm as stopping at a red light.”

Over 700 people in Israel are waiting for kidneys, and more than 150 for livers. Each year, about 300 people are added to waiting lists and some 100 die while waiting. Altruistic donors are thus a vital resource. Israel is ranked relatively low compared with other countries in deceased donations. It is, however, third worldwide in live donation, after South Korea and Turkey, according to a 2020 report from the International Registry on Organ Donation and Transplantation.

Malka, who guided Lerer through her donation process, has been Hadassah’s living donor nurse coordinator for seven years, helping potential donors navigate the required rigorous medical, psychological and ethics testing before donation. “Live-organ donation is wonderful, but only when it’s right for donors and their families,” she stressed. “I suggest, for example, that a man waits until after his son’s bar mitzvah. I urge that partners, parents and grown children are involved in the decision. And I introduce willing donors, who don’t match their relative or friend, to organ donor chains of giving—their kidney going to a matched stranger, in return for one needed at home.”

Three years ago, Hadassah clinical psychologist Benny Kashany participated in a donor chain, realizing that with one act he could save the lives of several people. “The husband of the woman who received my kidney has continued the chain of giving, donating his kidney to a stranger,” he said. “And the stranger’s father gave a kidney to a young girl.”

Central to the high rate of altruistic donors in Israel is Matnat Chaim (Gift of Life), an organization that has helped make Israel one of a few countries with more living than deceased donors—63 percent of all organs donated in the country are from living donors, compared with 28 percent in the United States. The organization was founded in 2009 by Rabbi Yeshayahu Heber of Jerusalem. He developed kidney disease at 42 and survived on dialysis until transplantation. During his dialysis sessions, Heber befriended a young kidney patient, Pinchas Turgeman, and tried to help him find a donor. Sadly, Turgeman passed away before an organ was available. Heber became a full-time kidney donation advocate and founded Matnat Chaim, which works with Israeli hospitals and even a few in the United States, facilitating over 1,000 live-donor kidney transplants. He succumbed to Covid-19 in April 2020, aged 55, and his widow, Rachel, now directs the organization. 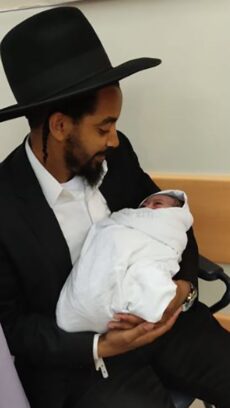 Organ transplantation is, of course, global, but at Hadassah, there are quintessentially Israeli versions. On May 11 of this year, as Hamas rockets battered Israel and violence erupted in mixed Jewish-Arab towns, Yigal Yehoshua, 56, of Lod was hit in the head with a brick during a riot in the city. He died six days later. His donated lungs, liver and kidneys saved four lives. One of them was Randa Aweis, a 58-year-old Christian Arab mother of six from Jerusalem. Recovering from kidney transplant surgery at Hadassah Ein Kerem, she thanked Yehoshua’s family for their “noble deed.” Her daughter Farouz blessed them for giving her mother “another chance at life.”

Esti Lerer appreciates that a donated kidney can bring people from different walks of life together. Tomer Tarfa Darja, she said, has become part of her family.

“I knew that God would direct my kidney to the person who needed it most,” said Lerer, who gave birth to a daughter in October after a trouble-free pregnancy. “A year ago, we celebrated Darja’s wedding, and three months ago, the birth of his daughter. We expect she will be firm friends with our youngest daughter, Mali. Giving Darja my kidney is among the most joyous things I ever did.”

When Being a Doctor Risks Your Baby’s Health