In 2017, Merri Ukraincik, a writer and educator from Edison, N.J., “felt punched in the gut” when she received an invitation to an annual school fundraising event at which her friend and her friend’s husband were being honored. Why the visceral reaction? The photo accompanying the invitation featured only the husband. Suddenly, what Merri knew as a problematic trend in the haredi Orthodox community, the erasure of images of women, had become, she says, “deeply personal—and painful.”

It has long been the policy of haredi-run Jewish publications such as Mishpacha Magazine, Binah Magazine and Ami Magazine to omit images of women on their pages in the name of modesty. Many haredi neighborhoods in Israel and the United States have implicit rules about not showing women, or girls, on neighborhood posters and circulars. But while the Orthodox Union and Yeshiva University—cornerstones of centrist Orthodoxy—have no such policies against printing images of women, what began as an issue that only affected haredi communities was now inching its way into some corners of the mainstream Orthodox world.

Ukraincik says her friend’s missing face spurred her to use her own personal writing and social media platforms as an opportunity to talk about this troubling trend, “to point out the damage it does not only to women, but to the Jewish community at large, how this hurts all of us as a humanity created—men and women alike—in God’s image. How can we say it is okay to erase half of what God created, to deny the holiness in each of us?”

How can we say it is okay to erase half of what God created, to deny the holiness in each of us?

It was through her articles that Ukraincik connected with Chochmat Nashim, an Israel-based organization that advocates for women within the Orthodox world. Chochmat Nashim has been pivotal in raising awareness about the erasure of women, helping to inspire activists in the Orthodox community. And so emerged the idea of The Jewish Life Photo Bank, a new stock photo subscription service under the auspices of Chochmat Nashim that features Orthodox Jewish women participating in religious and everyday life.

“Why?” the website asks. “Because the elimination of women’s images in the Orthodox world has real-life consequences. It damages women’s financial, religious and health rights. It leaves our girls without visuals of role models and promotes an unhealthy sexualized view of women.”

Within 48 hours of announcing the photo bank initiative and asking for help in setting up photo shoots, says Shoshana Keats Jaskoll, co-founder of Chochmat Nashim, they had over 200 volunteer models and photographers. Women—and men—from Jewish communities around the world took part in organized photo shoots as a way of countering what they see as a deeply problematic trend.

“In the photo bank, I saw an opportunity to do something, to not feel helpless about this, to try to be a part of the change,” Ukraincik says, who jumped at the chance to not only model for a shoot, but also to host one in her own home. “And I cannot tell you how wonderful that hour and a half was. Setting up, greeting friends—all professional women who took time from their busy lives to be a part of this. We were all glowing—not from putting lipstick on and posing in front of the camera, but from feeling in our kishkes that this was something that would make a difference in the healthy future of our community.”

Keats Jaskoll first encountered the erasure of women and girl’s images in Israel when she made aliyah in 2007 to Beit Shemesh, a largely Anglo city halfway between Jerusalem and Tel Aviv that, in recent years, has become increasingly haredi. The erasure started slow, and then progressed steadily, she says, describing how pictures of women and then girls began disappearing from billboards and advertisements in the neighborhoods near her Beit Shemesh home. “Even health clinics have taken women off of their posters,” she says, explaining that outdoor advertisements with women and girls would get vandalized. Advertisers had to stop using female imagery in order to avoid property damage. 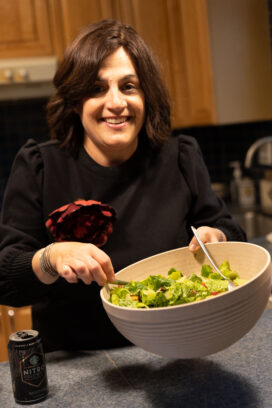 Keats Jaskoll has been fighting for a reversal of this widespread haredi trend in communities throughout Israel and the United States, but she is under no illusion that she is going to change everyone’s minds about this issue. That said, she knows that she and Chochmat Nashim have been successful in stopping several communities and synagogues from refusing to show pictures of women in their ads or webpages. She even describes how in some situations, when neighborhood bullies burned and tore down anything with images of women and threatened advertisers, those advertisers decided that they would remove images of men from their ads as well. “Which is sad,” Keats Jaskoll says, “but definitely a win when it comes to equal representation.”

“These people have left halacha,” she says. “There’s no Jewish law that says you have to erase women. Once you leave halacha, there are no boundaries. And extremism always gets worse.”

And countering extremism is why the photo bank is important. “The photo bank is a really beautiful thing,” Ukraincik says. “We are doing something positive, saying that if the institutions, magazines, etc. won’t change things, we as a group of Orthodox Jewish women will.”