Cut & Post
Celebrating the Diaspora Although much of Jewish history mourns the diaspora and the Jewish people’s disbursement to the four corners of the earth, one literary

One Singular Sensation
by llana Kurshan
For the past few weeks, I have been composing in my head an extended poem on the pleasures of sleeping alone. Chief among them is

Israeliness, Communism and Feminism
Films Army of Crime What Paris’s Nazi occupiers label an “army of crime” is in fact a group of refugees and communists, mostly Jews, led

Museum Makeover
by Esther Hecht
The 16-foot hourglass of polished steel, reflecting an inverted sky and surrounding landscape, shines at the highest point of the grounds of the hilltop Israel

2010 Harold U. Ribalow Prize Winner: Pictures at an Exhibition
by Sara Houghteling
Max Berenzon, son of a Paris art dealer, is fascinated by his father’s new assistant, Rose Clément. But it’s 1939, and though Rose’s brilliance and 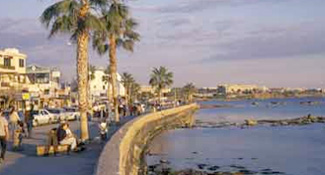 The Jewish Traveler: Cyprus
by Esther Hecht
Cyprus, the birthplace of Greek goddess Aphrodite, calls to everyone in search of love. Wine and romance are entwined on this Mediterranean island, the oldest
Page 1 of 3123NEXT PAGE »