If Yom Kippur, which begins the evening of October 2, is a time for doing away with one’s sins and ushering in the new Jewish year, then the pre-fast meal known traditionally as the se’uda ha-mafseket—literally, the stopping meal—is a good place to start. For an eminently food-focused people, the prospect of going without sustenance for 25 hours is particularly alarming, so we’re inclined to indulge in large meals laden with rich ingredients and—unwittingly—salt. As we think about what to serve before Yom Kippur, sodium intake should play a part in the planning.

The average American woman consumes about 3,000 milligrams of salt per day, while the recommended daily average is closer to 1,300. The fact that both restaurant fare and packaged foods are heavily salted doesn’t help, as our taste buds have adjusted accordingly, begging for the satisfying top note of salt in home cooking as well. 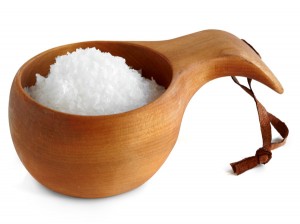 While it is true that high sodium intake has been linked to a variety of ailments—hypertension and heart disease among them—sodium does play an important role in bodily cell function and fluid circulation.
“Our bodies balance water and salt pretty carefully,” said Dr. Joe Richter, a physician in private practice in New York. “But taking in too much salt before a fast might actually cause some minor complications in people with hypertension.”

There are two theories on salt consumption before a fast. Some posit that consuming additional sodium helps the body retain water, which staves off dehydration and, in the long run, prevents thirst. While in theory this may seem logical, eating salty foods leaves us with the short-term problem of thinking more about where that next glass of water is coming from than our goal of atonement.

Conventional wisdom dictates that we shouldn’t eat that differently before a fast than we normally do. “You don’t want to shock your body with too much salt, sugar or fat—or even too much more food than normal, for that matter,” said Ellie Krieger, a nutritionist and author.

Beyond health ramifications, salt has a storied place in the Bible, and on the Jewish ritual table. It was included as part of burnt offerings at the Holy Temple (hence the symbolic shaking of salt on Shabbat halla), and used to ratify biblical covenants between God and the Jewish people. And who can forget about Lot’s wife who, with one errant glance backward, was turned into a pillar of salt?

When attempting to cook a low-salt meal, fresh herbs can play a major role, as they add an abundance of great nuance without an overload of sodium. Consider using a variety of fresh herbs, such as rosemary, thyme, oregano and sage, to tease the flavor out of other ingredients. Low-sodium vegetable, chicken or fish stock (preferably homemade) can also add depth and character without salt.

A few suggestions for eating before a fast: Fill up on low-sodium, fiber-rich foods, such as whole grain rice and broccoli. While drinking water the day before a fast is important, try to stay well hydrated the entire week before the fast—you will find yourself less thirsty on the actual day. Kosher meat is salted in the koshering process, so if you are serving beef or chicken, consider soaking the meat for one hour in cold water in the refrigerator, changing the water once.

Though it is generally more traditional to serve meat dishes at the pre-fast meal, consider trying this lower-sodium potato-and-herb bake. Its greatest advantage—besides being flavorful and light in salt—is that any leftovers can be refrigerated for after the fast, when dairy dishes are more typically served. 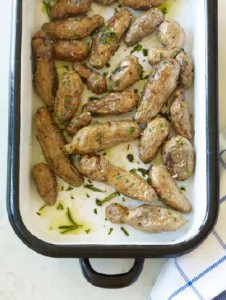 2. Heat butter in a pan over medium heat. Add onions and sauté, stirring often, until they are caramelized and light brown, 15-20 minutes. Remove from heat and let cool.

3. While onions are cooking, pierce potatoes and yams with a fork, wrap in paper towels and microwave 9-10 minutes per pound. Cool potatoes until easy to handle; remove skins and cut into 1/4-inch slices.

4. Arrange 1/3 of potatoes and yams in a buttered 9×13-inch baking dish. Sprinkle 1/2 of caramelized onions on top of potatoes, then sprinkle with 1/3 of the herb mixture and 1/3 of each cheese. Pour 1/3 of the sour cream mixture over the potatoes, tapping the dish so liquid seeps in between potatoes. Repeat with remaining layers.

5. Bake in center of oven for 1 hour, or until mixture is slightly bubbly and top is browned. If desired, place dish under preheated broiler for 2-3 minutes to further brown top.

This article originally appeared in the August/September 2007 issue of Hadassah Magazine.