Still Cooking After All These Years

Just as Hadassah refuses to show its age and keeps revolutionizing what it means to be a Jewish woman in America, our organization-wide obsession with cookbooks—publishing and buying them—likewise shows no signs of growing old. The obsession-cum-tradition began in 1928 with the publication of the first two chapter fundraising cookbooks. The rest is history: The delicious story of how American Jewish women cooked for decades, a heritage considered so worthy of preserving that, in 2002, Hadassah Magazine collected the best-of-the-best recipes from books published by chapters across the country, resulting in The Hadassah Jewish Holiday Cookbook

But what of the intervening 10-plus years? Any new trends among Hadassah cookbooks, I wondered? So, late last year, I put out a call for recently published chapter and regional cookbooks; the response was immediate and enthusiastic. I am now the proud collector of more than a dozen Hadassah cookbooks, each one a treasured repository of members’ beloved family recipes and, I excitedly share, a contemporary take on what we like to cook now (not everything is stuffed cabbage and brisket—though they continue to make routine appearances); there is a lot of quinoa, pesto and a ubiquitous inclusion of ethnic flavors from Chinese to Korean to Mexican.

In the companion articles soups and salads followed by main dishes and finally desserts, I list all the books sent to me and highlight several delicious recipes (from Tomato-Zucchini-Basil Soup to Bok Choy Salad, Baked Cod with Tomato and Black Olives, Grilled Chinese Chicken Burgers with Hoisin Sauce and Died & Went to Heaven Chocolate Cake).

But here, I would like to single out two tomes sent to me, neither one recent.

By most accounts, the best-known Hadassah chapter cookbook remains the Rochester Hadassah Cookbook. The book—now in its ninth printing, having sold more than 50,000 copies—contains over 1,000 recipes. If you didn’t get your fill of blintzes last week during Shavuot, here is a Hungarian version as well as a dairy, baked fish dish with a fancy title. B’teyavon!

To 1/4 cup milk, add eggs and mix well with beater. Add lemon, salt, sugar and flour; mix well. Add rest of milk and mix thoroughly with beater. If still too thick, add more milk. Pour small amount into hot greased frying pan. When batter begins to fry, pour off excess. When shell is formed, turn out fried side up by inverting skillet over a towel. Fill with 1/2 tablespoons of filling mixture. Fold edges to form a square, bake in greased pan in 350-degree oven until brown. Sprinkle with sifted confectioners’ sugar.

Roll up fish fillets into individual rolls. Arrange in baking dish, sprinkle with salt and pepper. Squeeze lemon over fish, dot with 1 tablespoon butter and bake in a 425-degree oven for 40 minutes, while preparing the sauce. Pour off liquid from peas and save. Melt 2 tablespoons butter and add onions or mushrooms, tomatoes, 1/2 teaspoon seasoned salt. Stir and simmer 5 minutes. Mix 1/4 cup liquid from peas with cornstarch, stir into sauce. Add peas, spoon mixture over and around fix, bake 10 minutes more or just till fish flakes with a fork.

The Inter-chapter Hadassah Cookbook, from chapters in Arlington, Belmont, Lexington, Medford, Waltham and Watertown, Massachusetts, was published 50 years ago. The book is, at the same time, a welcome time capsule of how we cooked—and, more to the point, how we wrote recipes—half a century ago as well as a surprisingly gourmet cookery book to modern eyes.

But I think it’s most fun to single out the old-school dishes from this particular title, and so here I share the recipes Strawberry Charlotte Russe and Bride’s Sponge Cake (a starred favorite at a bakeoff held by the chapters). 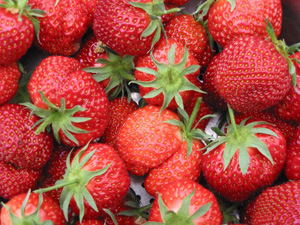 From The Inter-chapter Hadassah Cookbook, Massachusetts, contributed by Gertrude Shore.

Line inside of 8-inch springform pan with 3-inch strip of wax paper. Split ladyfingers, cut tips from one end and arrange, rounded end up, around edge of pan. In a large bowl dissolve gelatin in boiling water. Combine strawberries, lemon juice, sugar and salt; stir until sugar is dissolved. Combine with gelatin mixture. Chill until partially jelled; fold in whipped cream. Spoon carefully into ladyfinger-lined pan. Chill until firm, at least 5 hours. Remove side of pan and waxed paper; place charlotte russe on a large serving platter. Decorate outer rim with blobs of whipped cream and whole strawberries. “Delicious and beautiful to look at.”