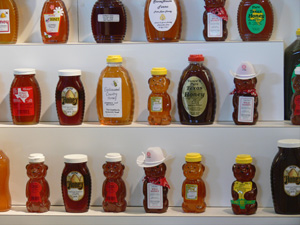 Chances are the honey you purchased to dip apples into on Rosh Hashana is not truly honey. According to Food Safety News (www.foodsafetynews.com), which tested over 60 honey containers sold in 10 states and the District of Columbia, 76 percent of samples bought at groceries and 77 percent from large retail chain stores had all the pollen removed, which is the only real way to identify the source of honey. All honey sold in drugstores and given out in fast food restaurants had been ultrafiltered, which heats, sometimes waters down and then filters the honey to remove pollen. This is different from traditional straining methods that retain pollen.

Although the Food and Drug Administration states that any product without pollen is not honey, the FDA does not inspect honey, and illegal, contaminated honey from China—many hiding unhealthy sweeteners and antibiotics—has flooded the North American market.

Vaughn Bryant, professor at Texas A&M University and a pollen expert who analyzed the 60 containers, found the full amount of pollen in every honey sample from farmers’ markets, food cooperatives and health stores like Trader Joe’s; 71 percent of organic samples from major grocery chains passed the test.

Raw, unprocessed honey that is harvested by beekeepers has medicinal properties and antiallergenic benefits. It contains nutrients, enzymes and antioxidants and appears in many varieties, depending on the flowers and plants where bees seek their nectar. —Sara Trappler Spielman

A thrilling chapter in the saga of Jewish diaspora migration unfolds when the Red Star Line Museum opens in September in Antwerp. From 1872 to 1938, more than two million immigrants, many East European Jews, left the Belgium city aboard Red Star Line ships bound for New York and other American ports. Some, like future Israeli Prime Minister Golda Meir, were escaping poverty or pogroms. Others, like Albert Einstein, were fleeing the Nazis.

Through vintage photos and travel posters, diaries, films and objects—from a battered suitcase to the piano later owned by composer Irving Berlin, who sailed from Russia as a boy—the Red Star Line Museum (www.redstarline.org) weaves a compelling tale of European migration. Housed in three massive warehouses, where immigrants were deloused and underwent health and document checks, the museum was designed by Beyer Blinder Belle, the firm behind the Ellis Island Immigration Museum in New York.

It is estimated that 30 million Americans have relatives who sailed on the famous Star ships. Anyone with family photos or artifacts to donate to the museum can e-mail redstarline@stad.antwerpen.be or call 011-32-3-206-03-50. —Monique Burns

Toronto-based textile artist Temma Gentles has fashioned award-winning Torah mantles, Ark curtains, prayer shawls and more. So it is not surprising that she has finally delved into the material possibilities of the Torah scroll itself. Torah Stitch by Stitch, a new project she has designed and is coordinating, will translate the rigor, intentionality, skill and holy work of writing a Torah scroll into cross-stitch embroidery.

Gentles is searching for 1,463 participants—women and men of all faiths—to complete the scroll, which will ultimately reach floor to ceiling and stretch out almost 100 yards. Each participant will receive a kit with all the materials necessary to stitch a panel of four verses, one for each of the matriarchs—a way to honor women’s role in Judaism. Gentles hopes participants will study the text they receive and consider working together in a community of other stitchers, as is traditional in needle arts.
She is not daunted by the multiyear timetable for the project. “The Torah wasn’t written in a day,” she says. —Rahel Musleah

Fragments of documents written as much as 1,200 years ago are being pieced together electronically at breakneck speed, thanks to Israeli scientists using a battery of computers to carry out more than 12 billion comparisons of digitized images of the fragments.

The documents are from the Cairo Geniza, a repository of damaged and discarded sacred books, Jewish legal responsa, philosophical writings, liturgical poems, personal letters and traders’ correspondence, most written in Hebrew characters, that accumulated over 1,000 years. They contain a trove of information about all aspects of medieval life in Egypt and the region.

Since the geniza’s discovery in 1895, scholars have found only 4,000 “joins,” or matches between fragments. In just two weeks, the computers found hundreds of new joins. The search was conducted by the Jerusalem-based Friedberg Genizah Project (www.genizah.org) in conjunction with Tel Aviv University.

The FGP has digitized and catalogued more than half of the geniza’s 320,000 fragments. Scholars will soon be able to view the fragments online, enhance them and perform their own comparisons. —Esther Hecht

A Muslim monarch helping to preserve a Jewish cemetery in a Catholic country, 350 miles off the coast of West Africa? Believe it.

The United States-based Cape Verde Jewish Heritage Project (www.capeverdejewishheritage.org) is spearheading the preservation of Jewish sites and culture in the Republic of Cape Verde, an archipelago of 10 small islands in the Atlantic Ocean. And the group counts King Mohammed VI of Morocco as its greatest supporter.

Recently, the king sent his emissary to join more than 100 people gathered in the capital city of Praia to rededicate its small Jewish cemetery and to honor the memory of the Gibraltan and Moroccan Jews who lived there in the 1800s.

“The Sefardic Jews who came to Cape Verde in the 19th century were a small group,” said Carol Castiel, president and founder of CVJHP, “but they and their descendents had a tremendous impact on the development of the country.” —Rachel Schwartzberg 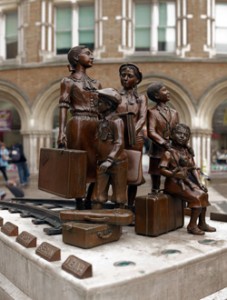 75th Anniversary of the Kindertransport

Following the horrors of Kristallnacht, the British House of Commons on November 21, 1938, agreed to let unaccompanied Jewish children from Germany and German-annexed territories quickly immigrate to Britain. This November, the children of the Kindertransport—now in their seventies and eighties—will gather for tea at Parliament for one of several 75th-anniversary commemorations. A memorial service recalling the arrival of the first convoy of Berlin children will take place on December 1 at London’s Liverpool Street Station, a primary gateway for the new arrivals and the site of a life-size bronze sculpture depicting a group of refugee children with their suitcases.

The commemorations began in June when more than 500 people from around the world gathered for a daylong reunion at Jews’ Free School. The school’s students, drawing on Parliamentary documents, reenacted the 1938 immigration debate. Former Foreign Secretary David Miliband, the son of Holocaust survivors, spoke, and Rabbi Jonathan Wittenberg, grandson of a prominent Frankfurt rabbi prior to World War II, led a service of remembrance. The following day, Prince Charles hosted a reception for Kindertransport alumni at St. James’s Palace and, also in June, an academic conference examined the second generation’s experience.

Concurrently, London’s Wiener Library for the Study of the Holocaust & Genocide (www.wienerlibrary.org.uk) opened a special exhibit, “Child Refugees: Five Portraits from the Kindertransport,” which runs through October 2. —Lois Gilman