The way I see it, holidays are either an opportunity to whip up old-school classics that have become mainstays of traditional observance—in the case of Hanukka, the standard and perfectly lovely potato latke—or an excuse to experiment with something fresh, inventive and unexpected. I suspect you can’t go wrong no matter what you decide, but this year, I’m going new school.

Culling through standout kosher cookbooks from the last year with the no-potato latke in mind, I came up with more possibilities than could possibly fit into one post—apparently I’m not the only cook looking for inspiration beyond potatoes. It was a tough selection process, but the alternative latkes (sounds like a Jewish alt-rock band!) I’m sharing with you are delicious newbies that just may become classics in your kitchens as the years progress.

The four recipe collections I chose from are drool-worthy beyond their latkes, and should be considered for holiday gifts and personal gifting, if you’re like me and can’t turn down a new, sumptuously photographed, mouthwatering cookbook. The titles: The Artisan Jewish Deli at Home

Go forth and fry away! 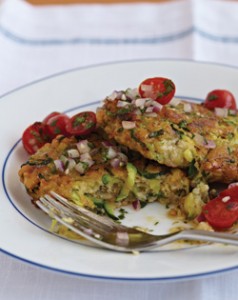 Makes 8 latkes. From The Artisan Jewish Deli at Home.

Process the onion and garlic in a food processor until they are finely pureed. Place the puree in a fine-mesh strainer set over a bowl; set aside to allow the liquid to drain away.

Coarsely grate the zucchini using a box grater, mandoline or food processor. Place in a wide-mesh strainer or the insert of a salad spinner. Add 2 teaspoons of the salt and toss to combine. Set aside for 30 minutes to drain. If you used a salad spinner, spin it as you would salad greens to strain away any liquid from the zucchini. Otherwise, use your hands or a flexible spatula to press as much of the liquid as possible out of the zucchini in the strainer.

Place the zucchini in a large bowl and add the marjoram, thyme, onion-garlic puree, and the remaining 1 teaspoon salt. Mix well. Thoroughly mix in the eggs.

Finally, stir in the matzo meal.

Preheat the oven to 200°F. Place a large heavy skillet over medium-high heat. Add 3/8 inch of oil and heat until it shimmers; do not allow the oil to reach the smoking point.

Using your hands, press 1/2 cup of the zucchini batter into a 1/2-inch-thick patty and carefully slip it into the pan, letting the patty fall away from you to avoid being splattered with the hot oil. Add 2 more latkes to the skillet and fry for 3 minutes per side, rotating the latkes 180° after 2 minutes on each side to evenly brown them.

Transfer the latkes to a baking sheet lined with paper towels to absorb excess oil. Keep warm in the oven while frying the rest of the latkes. Serve warm, topped with sour cream or tomato relish, if desired.

In a medium bowl, combine the tomatoes, oil, onion, parsley, lemon juice, and garlic. Stir until the tomatoes are evenly coated. Add salt to taste.

Transfer to a serving bowl and set aside until ready to serve. The tomato relish can be made up to 2 days in advance. Cover and refrigerate. Remove from the refrigerator 1 hour before serving.

Recipes from The Artisan Jewish Deli at Home by Nick Zukin and Michael Zusman, Andrews McMeel 2013.

Place a paper bag over a cookie sheet to use for draining the latkes after frying them. Heat 1/4 inch of oil in a large frying pan over medium-high heat.

Place the flour, sugar, cinnamon, nutmeg, and baking powder into a large bowl and stir. Beat the eggs in a small bowl. Set aside. Peel and core the apples and grate them on the large holes of a box grater or the large holes of a food processor blade. Add the shredded apples to the bowl with the dry ingredients. Sprinkle with the lemon juice, add the beaten eggs and mix.

The oil is ready for frying when it feels very hot when you place your hand two inches above the pan. Scoop up a heaping tablespoon of the apple mixture and gently drop it into the pan, using the back of the tablespoon to flatten it. Fry the latkes for 1 1/2 to 2 minutes per side, until golden. Drain them on the paper bag and let them cool for about 15 minutes.

If the batter gets very watery halfway through the frying, add a tablespoon of flour to the mixture and mix it in.

Use a sieve to dust the latkes with confectioners’ sugar. These are best eaten fresh but can be reheated in the oven. Store them in the fridge for up to three days or freeze them for up to three months. To reheat, place frozen latkes onto a cookie sheet and bake them in a 400°F oven until crisp. 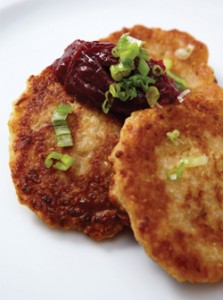 In a heavy gauge saucepan, preferably stainless steel, warm two tablespoons of oil and sweat the onions until soft and translucent. Add the quinoa and stir for a few seconds to coat all the grains with the oil. Add the water and a pinch of salt and bring to a boil. Lower the heat and simmer until all of the liquid is absorbed. Remove from heat and let cool.

In a dry mixing bowl combine the flour, baking powder, and one tablespoon of kosher salt and mix well. Add the egg and the soy milk and mix until all ingredients are fully combined. Add two cups of the cooked quinoa and mix.

Heat two to three tablespoons of oil in a frying pan. When the oil is hot, spoon batter into mini pancakes (fist size) and fry for 30-60 seconds on each side, or until golden brown.

Cut the squash into chunks and pass them through the grating disk of a food processor.

Heat 2–3 tablespoons of oil in a large skillet over medium-low heat. Working in batches so that the latkes are not crowded in the skillet, take a golf ball-size portion of the squash mixture, flatten it between the palms of your hands, and add it to the skillet. Repeat. Cook the latkes until they’re crisp and brown around the edges, about 4 minutes; then flip and cook for another 3 minutes on the second side, until crisp and deep golden brown all over and still tender inside. Transfer to a paper towel-lined plate or baking sheet. Repeat with the remaining squash mixture, adding a tablespoon or so of oil between batches.