Hebrew Bible as Guide for Our Nation’s Founders and Leaders 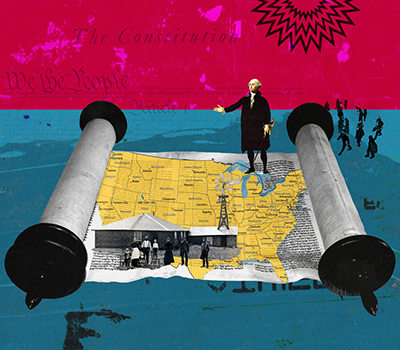 Our divided country greeted the 2016 election results with mixed emotions: disappointment and anxiety experienced by some, excitement and promise felt by others. But for all Americans at this time of transition, with a new president sworn in on January 20 and a new Congress at our nation’s helm, the words of the Hebrew Bible call to us with clarity and urgency, reminding us of the core values that formed the foundation of our country, values that should guide us today.

In his recently published book, Reading the Bible with the Founding Fathers

, Daniel L. Dreisbach, a professor at American University in Washington, D.C., documents the Bible’s profound influence on American politics and culture in the 18th and early 19th centuries. He highlights Micah 6:8 as a commonly quoted scriptural passage in the literature of the founding era: “God has told you…what is good, and what God requires of you: only to do justice, and to love mercy, and to walk humbly with your God.”

Explaining the centrality of this biblical verse cited by prominent figures like George Washington, Thomas Paine and John Adams, Dreisbach writes, “A commonplace belief among the founding generation was that both individual and collective righteousness were prerequisites for divine favor and vital to the success of the American political experiment.” They believed that “a self-governing people must have an internal moral compass that would encourage individual citizens and the broader society to behave in a controlled, disciplined manner.”

We need look no further than the first chapter of the Torah, Genesis 1:27, to find the values that influenced our nation’s founders: “God created the human in God’s image…male and female God created them.” The first part of this pivotal verse establishes the inalienable worth and inherent potential of each and every human being. The second half indicates—to borrow language from the Declaration of Independence—that women and men “are created equal” as “endowed by their Creator.”

What does it mean for human beings to be created in God’s image? The Torah stipulates that men and women can live up to their divine potential by following the biblical laws that have shaped civil societies for thousands of years. Exodus 22:20-21 teaches, “You shall not wrong or oppress a stranger, for you were strangers in the land of Egypt. You shall not mistreat any widow or orphan.” The Torah insists, again and again, that we must safeguard the most vulnerable individuals in our midst and treat them with both dignity and empathy. The prophets echo this expectation loud and clear. For instance, Isaiah 1:16-17 instructs, “Cease to do evil; learn to do good. Devote yourself to justice; aid the wronged; uphold the rights of the orphan; defend the cause of the widow.” Each year on Yom Kippur, we reinforce this message with a haftarah reading that articulates God’s demand that we “let the oppressed go free…share your bread with the hungry…clothe the naked” (Isaiah 58:6-7).

Still today, these ancient teachings about equality and justice, empathy and compassion should continue to ground and guide us. Especially at this time of change and division, the words of our biblical heritage remind us of what it means to fulfill our divinely given potential and to preserve the democratic values upon which our nation was founded.