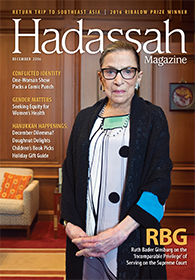 Permit me to take issue with “Unifying for Change: Gender Equity in Medicine” in the otherwise lovely December 2016 issue. Yes, clearly women are shortchanged in access to appropriate medical care, diagnosis and research opportunities. But using the statistic of male animals almost exclusively for testing deflects the major ethical issue of why any animals should be used at all. There are so many better, faster and far less cruel alternatives to live animals as test subjects that should be used in the 21st century. Judaism especially, with our preponderance of medical specialists, should be a role model to the world in this regard.

“Supreme Champion of Justice, Gender Rights and Inclusivity” in the December issue was a most interesting feature. However, Justice Ruth Bader Ginsburg was not the first woman to make the Harvard Law Review. That honor goes to the late Priscilla Holmes, who was in my class of 1955. Holmes was elected to the Review at the beginning of her second year at Harvard.

I appreciate Liz Polay-Wettengel’s thoughtful article, “Being Jewish at Christmas,” in the December 2016 issue. I am now a grandmother who has had intermarriage in my family since my grandparents’ generation.

I agree that the December dilemma can be managed. My observation has been that where Jewish kids lose the thread of Judaism is more likely to be the September dilemma. In many families, on the holiest days of our Jewish year, the non-Jewish spouse goes to work and the children may be sent off to do their homework even before the holiday is over. How special does Judaism feel when our most sacred day is barely celebrated in a child’s home? The same is true of Shabbat, which, sadly, is often ignored completely. Simply lighting Shabbat candles and having challah and grape juice can be tremendously meaningful.

As a community, let’s stop focusing so much on December and begin showing our children the beauty of the true Jewish calendar, and the festivals and holy days that we celebrate all year long.

Thank you for the essay “Being Jewish at Christmas.” Celebrating and honoring family as well as respecting differences take precedence over the celebration of the holiday. From a personal perspective, I did notice the absence of one important family member. While both Bubbe and Nana are specifically mentioned, “Grandpa” was not. Yes, Virginia, there is a grandpa.

Grandchildren do not have to “play the dreidel game with Bubbe and bake Christmas cookies with Nana,” as the article suggests. Grandpa can do this as well, perhaps better, providing a gender-neutral example for his grandsons and granddaughters.

HEBREW AN IMPORTANT PART OF OUR HERITAGE

As someone who is fluent in Hebrew (I gave birth to my first child at Hadassah Hospital in Ein Kerem), I am disappointed to see that Hadassah Magazine is no longer running “About Hebrew” by Joseph Lowin. It was the first thing I looked for in every issue. Despite my fluency, I always learned something new, whether it was an obscure use of a word or a biblical origin of a phrase. I think it is a shame that the magazine of Hadassah, the Women’s Zionist Organization of America, has eliminated such an important part of our heritage.

Editor’s Response
We appreciate your feedback regarding the “About Hebrew” column. When we conducted an online survey of our readers several months back, it did not register as one of the more popular columns. With our desire to add some new features, something had to go. As we continue to re-evaluate our direction, we will certainly consider that some of you are missing that column.