I was in awe when two hands went up—a guy and a girl—to volunteer to prepare the gefilte fish. How in the world do they know how to do that, I wondered. Until this point, I hadn’t even envisioned that those oval balls from the glass jars my parents always bought had come from a live fish. Of course, it is called gefilte fish but I had never given it much thought. I had caught, gutted and fried fish, usually trout, on camping trips as a child in the 1950s, and a fish looked like a fish, not a funny, jelled round thing. There were no jars of fish in Israel in 1972. I was living in a new communal settlement near the Jordanian border five miles above the Jordan Rift Valley. You made your own gefilte fish or you went without.

Here’s what the volunteers did. Step one: go to the shuk in Jerusalem and choose several live carp that the fishmonger knocks out by clobbering them on the head before tossing them into a bucket. Step two: preparation. Back in the kitchen, descale the fish, slice them open to remove the innards and cut off the heads and tails and put the remainder through a huge grinder. Step three: add eggs, chopped onions, salt, pepper, a little sugar and cold water, make patties and gently place them in a huge pot with a small amount of water laced with sliced carrots, onions, salt and pepper. Cook for two hours. I haven’t touched a processed, stuffed-into-a-glass-jar gefilte fish since that first Pesach on the moshav.

I started making my own gefilte fish when my daughters and I moved to Ra’anana in 1986. I had my former mother-in-law’s recipe. Her gefilte fish was delicious, so why not take the good with me? I didn’t realize it at the time, but I was continuing a family tradition that belonged to my children from their father’s side. In the beginning, I’d buy live fish from the shuk in Tel Aviv, bring them home in a bucket with water and put them in my bathtub until I was ready to start cooking. A few years later, I began having the fishmongers kill the fish, but they wouldn’t descale them. So I’d take home dead fish wrapped in newspaper, oblivious to the dangers of wrapping food in newspaper ink, and use a knife or vegetable peeler to descale the fish, a process that defies cleanliness. Sticky, gooey scales flew around the kitchen, attaching themselves to cabinets, appliances and me. Eventually, the fishmongers added “cleaning services” for a fee—but didn’t grind.

So, I would take home a dead, gutted and descaled fish, but still had to push it through my American Sunbeam electric grinder, powered by an enormous portable transformer—which once “threw” me across the room when I plugged in an electric blanket—to pulverize the bones and skin. Local fishmongers did, finally, add grinding services, but the lines are long. Several years ago, supermarkets started importing jars of gefilte fish before Rosh Hashanah and Pesach and various take-out services sell patties by the piece or pound, but I can’t give up this 30-year ritual of making them from scratch.

Every year, the night before the Seder, my oldest daughter and I—my younger daughter is vegetarian and won’t get near the fish—stand together in the kitchen, chopping onions by hand as two inches of water heats up in the wide-bottom, five-gallon aluminum pot I bought years ago just for this purpose. At some point, we started making our own tradition by adding grated carrots and chopped parsley to the mixture. We always place a small patty in the boiling water first so we can test the flavor. After 10 minutes in the pot, we evaluate the salt and pepper content—usually low on both. Today, two of my granddaughters help out, making them the fourth generation, starting with my ex-mother-in-law, to prepare the same gefilte fish, although I’m sure the tradition probably goes back to her Polish family that perished in the Holocaust.

Finding out the origins of gefilte fish wasn’t all I learned on that first Pesach on the moshav. I learned how people traditionally clean their home for the holiday, a custom I hadn’t really followed when growing up in California. The responsibility for kashering our settlement’s communal kitchen was under the jurisdiction of the military rabbinate, even though we were civilians, probably because reserve soldiers often ate in our dining room. Military cleaning crews descended on the kitchen and kashered some items with a blow torch and dipped pots and pans and cutlery into an enormous cauldron with boiling water. They scrubbed and washed and scraped until our kitchen was pronounced kasher for Passover.

Living quarters were very small in the settlement’s temporary site, where we lived until our homes were built four years later. My then-husband Avramik and I shared a prefab structure with two bedrooms—one for us and one for a single guy—a toilet room and a shower room with a sink. The little entryway had enough space for a refrigerator, oven and narrow table. My Amcor oven had removable parts, which I unscrewed, cleaned and reassembled that Pesach and every Pesach after that for the next 25 years, until its demise, without the efficient blow torches and determination of the army cleaning teams. The fridge was old and small and I covered every shelf and drawer with paper held in place with scotch tape, a practice I gave up as I got older.

I labored over the shower stall and toilet room out of proportion to any definition of clean. I scrubbed the shower walls, the floor and the drain with the suds from white square Sintabon soap and chlorine bleach, using a toothbrush to get at the little corners. I thought that was what everyone did. I was the immigrant trying to be like the real Israelis around me.

The immigrant in me has learned that being Israeli is whatever I choose it to be. I decide what I clean and what I don’t and what gets covered in paper and what doesn’t when I kasher my house for Pesach. And for several years now we all, immigrants and veterans, can conveniently order our holiday fish over the phone: Two kilos mashed without skin and without bone. Ground twice. For tomorrow at 10:00. Tradition is tradition, even with a bit of modernization.

In Israel, I use only carp, so the taste will be different depending on what fish you find. I ask the fishmonger to debone and grind twice. 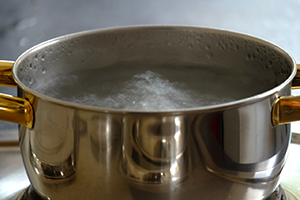 Prepare the pot
Put enough water in pot that it will just cover the fish balls when you add them, about 1-2 inches of water. You can put less and later add if it’s not enough. Less is better if you want a gel.

Bring water to a boil and add 2 teaspoons salt, 1 tablespoon sugar, 1 1/2 teaspoons pepper, sliced carrot, sliced onions and, if you have them, fish bones and fish heads.

When the water is boiling, add a very small test ball to the water. Cook it for a few minutes and check the seasoning. I usually end up adding more salt and pepper. Once you’re satisfied with the seasoning, place the fish balls—or oblongs—gently in the water. Be sure to wet your hands when making the balls.

When they are all in, lower heat and cover and cook for 1 1/2 to 2 hours. I shake the pot gently from side to side several times so they don’t stick. When finished, let cool a bit and take out and top with a sliced carrot.