Fathers and Sons in Hasidic Brooklyn 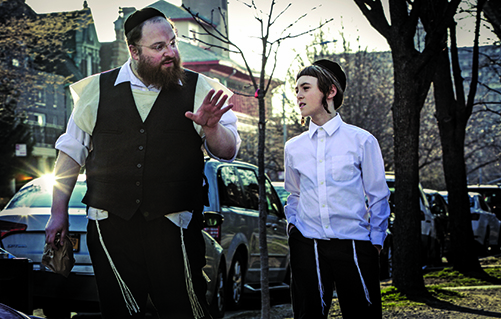 Early on in Menashe, a new film from Joshua Z Weinstein, the title character—played by Hasidic actor Menashe Lustig—is on an arranged date with a widow.

They are both ultra-Orthodox, and after asking which rebbe he follows, she complains to him about another rebbe in their Brooklyn neighborhood: “I can’t believe he permits women to drive,” she says.

This one scene points to a difficulty in watching Menashe. The film has broad, universal themes—single parenthood, child custody—but is set in an insular community. How you react to the film may depend on your view of the ultra-Orthodox.

Menashe is recently widowed. His 10-year-old son, Rieven (Ruben Niborski), was taken from him after his wife died and lives with Menashe’s brother-in-law Eizik (Yoel Weisshaus), a successful businessman, and his family; his rebbe won’t allow a child to be raised in a single-parent household.

Kindly but hapless Menashe, a clerk in a supermarket, is a sad sack who only comes alive when he is with Rieven. The obvious love between father and son, and Menashe’s struggle to gain custody of Rieven, is entirely relatable.

Ironically, while the rebbe’s rationale for separating the two seems strict, it may not be wrong. For one thing, Menashe can’t afford a child; he’s barely getting by. He’s also irresponsible and when Rieven stays with him for a week has difficulty getting the child to school on time.

In a recent interview, Weinstein explained that his goal in creating Menashe was to present an honest portrayal of Hasidim, “to show the good, the bad, the real,” he said.

Weinstein achieved his goal. The Hasidic love of Torah is admirable. Less so is their rigid interpretation of Torah law.

This is Weinstein’s feature debut, and if it isn’t perfect, it is certainly a solid attempt—largely due to the chutzpah of his casting.

The director elicits evocative performances from his almost exclusively Hasidic cast, many of whom had never seen a movie let alone acted in one. The film, which opens on July 28, is almost entirely in Yiddish with English subtitles.

Weinstein doesn’t tie it all together in a neat ribbon. In the end, Menashe recognizes that his son is better off living elsewhere and makes an effort to improve and, perhaps, try again for custody in the future. I don’t know whether or not I’m rooting for him.