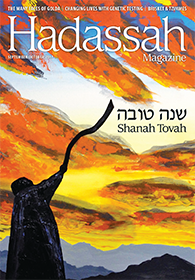 A Disservice to Golda?
In the September/October feature Golda: A Force of Nature, I found the section titled “Golda, The Lover” to be inappropriate and offensive.

The introduction to the article makes clear that Golda felt strongly that gender should not define her. Yet, the author prominently includes remarks about her sexual behavior. I can’t imagine the same appearing in an article about an important male figure in Israel’s history. To include this section and omit substantive information about her tenure as prime minister does an immeasurable disservice to such an important figure.

Questioning Jewish Values
After reading the Q&A with Randi Weingarten in the September/October issue, the real question for her is how her Jewish values guide her in condemning millions of American children to public school systems that, by design, protect teachers’ union members no matter how horrendous the educational experience they deliver. Case in point: Chicago. Betsy DeVos, secretary of education, does not have “an antipathy to public education”; she has a commitment to providing every family with access to school choice no matter what their income or where they live.

Origins of Tay-Sachs’ Screening
I enjoyed Wendy Elliman’s September/October article, A Model for Preventing Inherited Disorders, about screening for Jewish genetic disorders, especially Tay-Sachs. It is worth noting that the genesis of Tay-Sachs screening dates to May 1971, when Dr. Michael Kaback, a colleague at Johns Hopkins University, organized the first-ever community-based Tay-Sachs screening program in which 1,800 young Jewish adults were screened at a temple in Bethesda, Md.

​Dr. Kaback and colleagues worked with local rabbinic leaders, social service organizations and the Johns Hopkins School of Public Health to educate the Jewish population in the Baltimore-Washington area. Within two years, similar screening programs were carried out in cities across North America, and California established the first statewide screening program in 1973.

HBI’s Contribution
With my new doctorate in literature and feminist theory, I went to work for Hadassah Southern California in 1996. At the time, reading the report “Voices for Change”—referenced in the September/October feature Pioneering Gender Studies about the Hadassah-Brandeis Institute—led me to propose that we establish what became the Morningstar Commission. The commission’s goal was to improve the image of Jewish women in the media. I recruited high-profile women from Hollywood, the arts and academia, women who were brave enough to challenge the assumptions of their own industry. HBI co-director Sylvia Barack Fishman was highly supportive, often flying to Los Angeles to help lead the effort.

As both a board member of the Hadassah-Brandeis Institute and a frequent keynote speaker at Hadassah events in my capacity as an author, I know that many Hadassah members are unaware of their organization’s contribution to this important institute.

​I use my speaking events to bring to their attention our work in researching and documenting Jewish women’s lives in all their nuances—past and present. Occasionally, a leader of the chapter/region may have heard about HBI, but 99 percent of the membership has not. I hope that it won’t take the magazine another 20 years to feature HBI again.