A Misguided ‘7 Days in Entebbe’

7 Days in Entebbe is the latest screen adaptation of the hijacking of Air France Flight 139 and the successful rescue of the hostages by Israeli commandos. The film, which opens on March 16, is based on events that mesmerized the entire world 42 years ago. Its creative plotting, however, is proof that even great moments in Jewish and world history fade from memory, and thus when being retold are done so with poetic license.

For the record: In June 1976, two German members of the West German Revolutionary Cells and two Palestinians from the Popular Front for the Liberation of Palestine boarded Flight 139 from Tel Aviv to Paris during a stopover in Athens. The four seized control shortly after takeoff and rerouted it to Entebbe Airport in Uganda, where 248 passengers and 12 crewmembers were held and threatened with death unless 40 convicted Palestinian terrorists were released from an Israeli prison.

Another made-for-TV production aired in 1977: NBC’s Raid on Entebbe with Charles Bronson as an Israeli general.

Finally, and possibly the most accurate in terms of look and feel, there was Operation Thunderbolt. (Known in Hebrew as Mivtsa Jonathan, Operation Jonathan, it was named in honor of commander Jonathan Netanyahu, the only Israeli soldier killed in the rescue). An Israeli film, it came out in 1977 and featured original footage of Yitzhak Rabin and Shimon Peres. 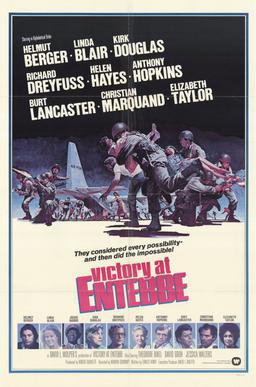 All three were shot during the immediate euphoria after the rescue, when Israel was viewed with admiration and before anti-Israel movements like BDS became fashionable on American campuses. It was a time when hijackings were rampant, and prevailing world sentiment was that killing innocents was wrong under any circumstances. In the films, the Israelis were heroes; the hijackers and Idi Amin, the Ugandan ruler who provided them safe haven, were not.

7 Days is different. In a misguided effort to be fair and balanced, it explores “the mindset of the hijackers themselves,” according to the film’s production notes. Since all the hijackers were killed, this means making things up.

The film suggests that the two Palestinians hijackers duped Germans Wilfried Böse (played by Daniel Brühl) and Brigitte Kuhlmann (Rosamund Pike), who are viewed with some sympathy. In one ludicrous scene, Kuhlmann leaves the terminal where the hostages are being held, goes to another terminal and, placing a coin in a public telephone, seemingly dials up her boyfriend, Juan Pablo, back in Germany. She talks into the phone, expressing her reservations about the mission, until a passing stranger points out to her that the phone does not work.

Before she left Germany, Pablo had urged her not to participate in the hijacking: “How would it look,” he asks, “Germans killing Jews again?”

In another bit of artistic license, 7 Days opens with members of the Batsheva Dance Company performing to a stirring section of the Passover-time song “Echad Mi Yodea” (Who Knows One). The dance has only a tenuous connection to the rest of the film: In the altered reality created in the film, one of the dancers is the girlfriend of an Israeli commando who takes part in the raid. Watching the film, I had no idea why the dance was repeated several times, including during the closing titles.

Director José Padilha, however, saw symbolism in the scenes: As the dance progresses, the dancers take off their religious garb, he explained. “Metaphorically they’re shedding their orthodoxy. They’re breaking free from tradition by opening themselves up to new ideas that might contradict their old beliefs.”

Whether or not a viewer buys into Padilha’s suggestion that Jews should break clean from their traditions, the fact remains the dance had little to do with the substance of the film and, symbolism aside, just serves as a further distraction in an already slow-moving movie.

The action, such as there is, switches between the hostages and a dithering Israeli cabinet, where a political battle rages between Prime Minister Yitzhak Rabin (Lior Ashkenazi), who favors negotiating, and his scheming defense minister Shimon Peres (Eddie Marsan), who virtually backed Rabin into approving the rescue mission.

Unfortunately, with its pacing issues, 7 Days in Entebbe seems more like a long and distracted two weeks.