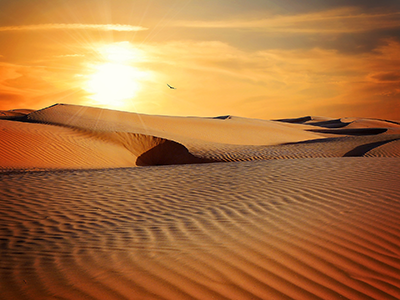 The Jewish people constitute about two-tenths of one percent of the world’s population, but our impact on humanity has been disproportionate. Similarly, the Hebrew Bible, which in most single-volume editions runs about 1,000 pages, has had incalculable influence on civilization. Israel, too, is a tiny country that, for better or worse, absorbs an outsize share of the world’s attention.

Which brings me to our journey in the desert. The distance from the ancient capital of Pi-Ramesses—the Nile Delta city from which our ancestors left Egypt—to Ashkelon, the nearest Israeli city, is about 150 miles. An unhindered drive on a paved road would take less than three hours.

So here are four modern questions:

Why is that span—less than the distance from New York to Baltimore—so important in Jewish history?

Why did it take our forebears 40 years to cross?

Why does the story of Passover—which begins the evening of March 30—tell us more about the place where we got bogged down than the place we were going to?

Why, as travelers often observe, does the journey loom larger than the destination?

This is the puzzle we are all supposed to know the solution to and the questions we always ask. The answers, I suspect, are in our collective desert experience and in the never-ending utility of the lessons it offers.

There is logic to the argument that the slaves leaving Egypt needed time to develop the mentality of a free people before becoming a real nation. The journey may not be more important than the destination, but it is a time of trial and testing, of focused attention on the goal and of preparation.

Our laws and traditions have their origins in the wilderness we traversed. Indeed, four of the five books of Moses are almost entirely devoted to leaving Egypt and the journey to the Land of Israel. Our identity and faith are rooted in the story we tell and relive every year in the Hebrew month of Nisan—a story we have told for 4,000 years.

Our liberation and the 40 years of wandering resonate today not only because the generation of preparation was successful and ancient Israel was established and flourished. The real test of the Jewish people—and the ongoing value of the trek—became apparent in the generations after we lost our home and Holy Temples (the first in 586 BCE, the second in 70 CE).

That first desert experience taught us how to prepare for many other long journeys through physical and spiritual wildernesses.

What was our exile if not a 2,000-year desert? What were the lands in which Jews were subjected to discrimination, attack, forced conversion and expulsion if not virtual wastelands? What was the Holocaust if not the ultimate wilderness, bereft of support?

And yet, every time we, or our ancestors, went through these trials, the Passover story—the original testing ground—was a blueprint for finding our way out. We survived, and often thrived, by holding on to our rules, our traditions, our values and our unity.

Even with Israel’s success, we still apply the lessons of that long-ago journey. The hostility of many of Israel’s neighbors, the antagonism in the United Nations, the efforts to boycott and isolate the Jewish state and the resurgence of anti-Semitism remind us—we, who do not need reminders—that there are many deserts to our right and to our left.

Sinai teaches us not only of our formation as a nation, not only of our delivery from slavery, but also that all deserts—even if we can’t traverse them in three hours—are finite.

The journey and the destination: There’s no contradiction in knowing that Jerusalem is ours and also saying, “Next year in Jerusalem.”

A joyous Passover to all! Chag Pesach Sameach!